Need to catch up? Check out the previous American Gods‘ recap here.

Though Shadow Moon is American Gods‘ protagonist, he’s also the character we comparatively little about… at least, until this week’s episode.

The hour, titled “The Beguiling Man,” uses Shadow’s torture at the hands of new character Mr. Town to delve into Moon’s memories. Many of these deal with Shadow’s mother, his frustration with her for not telling him much about his absent father, and his grief over her death. “Now we get an insight into why he’s so pure and good and moral, and it’s the love of his mother,” series star Ricky Whittle tells TVLine. “He had something that was truly pure, growing up: a strong, independent black woman raising a boy by herself but giving him so much light and goodness to rise above any kind of discrimination and violence.” 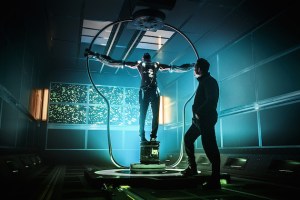 In a moment, we’ll delve deeper into Shadow’s past — and what light it bears on his present — but first, a quick recap.

* After being spirited away from the diner, Shadow is placed on a train and hooked up to some wires and such. A man named Mr. Town introduces himself and asks about Mr. Wednesday, but Shadow says nothing. So Mr. Town stimulates Shadow’s memories of his youth. We see him and his mother arrive in the United States from France when Shadow was a teen; young Shadow was bookish and introspective, and very close with his young mom. After he gets into a fight with some local guys and is hauled in by the police, his mom reminds him that “You know the truth of who you are.” But a churlish Shadow is angry that she hasn’t told him much about his father, whom she says is dead.

* Via flashback, we watch Shadow as he waits in a hospital for his mother’s test results. As he sits there, a man who sounds a lot like Wednesday performs coin tricks and then gives Shadow a coin. But when the boy turns to look him in the eye, the man is gone. The test results aren’t good: Shadow’s mom eventually dies, imploring him to “feel the light” while he cries by her side. 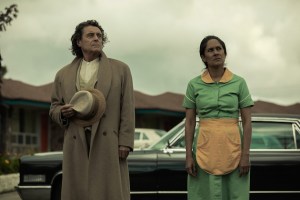 * Zorya Vechernyaya is really dead, because she has no more believers who would keep her alive. (Sniff.)

* Mr. World wants Bilquis to use her power — love — as a weapon of war. She refuses. Elsewhere, Tech Boy hunts down Media (whom we don’t actually see during the episode) and tells her to get her act in gear. 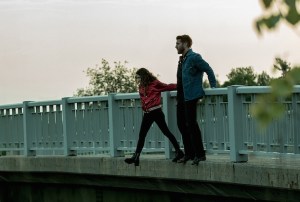 * After they have car troubles while trying to chase Shadow’s light, Laura and Mad use a “shortcut” he knows about called “the hoard,” which hurls them through time and space and lands them on Shadow’s train. The pair walk through the train, killing people until they arrive in the car where Shadow is being held. Laura crushes a guard’s skull with her boot while her estranged husband watches. “I had to save you,” she explains. Meanwhile, outside, Mr. Wednesday pulls his car directly into the path of Shadow’s train, enraging Mr. Nancy so much that he stalks off, yelling, “I’ll see you in Cairo!,” as a storm comes to a head, the train hits the car, causing an explosion.

Below, we talked to Whittle about Shadow’s saddest moment and how it’s quite different from what readers of Neil Gaiman’s book might have expected.

TVLINE | By living abroad and then in America, Shadow grew up with a worldview that many people don’t have.
He was very cultured. He came from Europe, so he’s like Neil Gaiman and myself and several members of the cast: We get both sides of the coin. We see how the rest of the world sees America, and then we experience America for ourselves and how Americans see themselves. You know, it’s two very contrasting ideals. It’s absolutely fascinating. But with Shadow, he has that world experience, and he doesn’t understand sometimes the way that he is put into a box. He’s pigeon-holed just because of the color of his skin or his background, where he’s from. It also shows that he’s a loner and he always has been. He’s always had to try and just go through life on his own, because as soon as his mother passes, you get the feeling that he’s never had anyone since and he’s just traveled around, just kind of just trying to stay invisible. 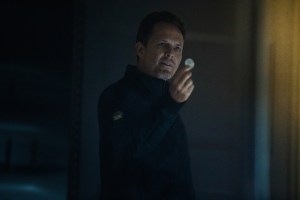 TVLINE | Mr. World points out how Shadow is always “just going with the flow.”
Yeah. With things just happening [to him]. Yeah, but I feel, as an audience member, it gives me more empathy for Shadow and how much he did lose. Maybe that’s what he’s been searching for throughout Season 1 and, well, his life up to when we first meet him: He’s looking for that light again and maybe he’s trying to find that unconditional love that he once received from his mother.

TVLINE | When I was reading the book, Shadow’s mother’s death scene struck me, because Shadow is reading a book by her bedside but can’t bring himself to look directly at her as she’s passing. In the episode, he’s much more engaged. I realize it’s weird for you to be talking about someone else’s acting—
He’s fantastic, Gabriel [Darku, who plays young Shadow].

TVLINE | He’s so good. It seems to me that in the book, a lot of what Shadow is ashamed about — like not being more present as his mother died — informs choices he makes later on. At the table read or any other time, was there any conversation about how the show would approach this scene?
We basically wanted to push upon how strong that love was. There’s two very different takes. [One is] it hurts so much that you can’t see the person you love die. But then she gave him so much, and we wanted to show that they’re engaged to the end, and they were so connected that he had to look at her… It’s a twist that Gabriel made, and a powerful choice I feel that may be more powerful than not being able to look at her, because that would maybe send Shadow in a different direction of regret — which he’s already kind of dealing with a lot in this show and that might inform his choices with Laura… I mean, it’s all opinions. I can’t say it’s right or wrong.

TVLINE | It’s very moving, either way.
Yeah. For me, it was more powerful, because you’re seeing a young boy look at his mom and know that she’s going. Even from the moment he finds out that she’s got cancer, and when we see young Shadow fighting — yes, he’s trying to protect a kid [from bullies], but he’s not. He’s angry with the world because he knows the world is about to take his one thing that he has in his life. He’s just taking his frustrations out on whoever’s in front of him. That, for me, is the most heart-wrenching thing: that you’ve got a real good kid who’s well read, who’s well-traveled [and is] just unleashing hell on a bunch of kids because he’s angry that the world is taking the only thing he really cares about.