It’s been nearly two years since American Gods aired its Season 1 premiere. And while revolutions around the sun are mere grains of sand in a deity’s sandal… that’s a long time for us mortal types. My worry, going into the sophomore round: Would the Starz drama, which went through many behind-the-scenes changes while it was away, remain a faithful, interesting adaptation of Neil Gaiman’s beloved novel?

The answer, at least as far as the premiere goes, is yes. The start of Season 2 has the vibrancy and quirkiness present in Season 1. The visuals are glorious. Ian McShane, especially, seems like he’s having the time of his life. And I’m in no way mad at the series’ made-for-TV add-ons, one of which reunites Salim with his Jinn.

Read on for the highlights of the premiere, “House on the Rock.” 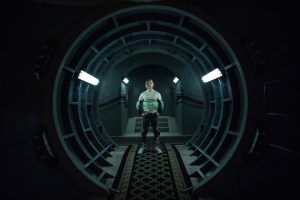 FORE! | A man playing golf on a well-manicured course is just about to tee off when he’s mowed down by a limousine that careens around the green. It’s Technical Boy’s ride, and when he finally pulls into the Black Briar Country Club parking garage and opens the back door, we see that Mr. World is in back. “Duuuude, you’re a mess,” Tech Boy says, and he’s not wrong: Mr. World’s face is all pixelated after that run-in at Easter’s. Tech Boy helps Mr. World gain entry to a secret facility underneath the garage, but that’s as far as TB is allowed to go: Mr. World is spoiling for a fight with the Old Gods, and “I can’t sell war without my best salesman,” he says. “Find Media.” 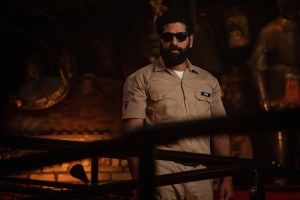 WELCOME TO HOUSE ON THE ROCK | Meanwhile, Wednesday, Shadow, Laura and Mad Sweeney drive through Wisconsin in Wednesday’s car. They’re headed to The House on the Rock, a sprawling and deeply weird tourist attraction that contains a multitude of oddities as well as a giant, indoor carousel. (The place is seriously cracked, in the best way, and I can’t do it justice here. If you want more info, here you go.)

But before Wednesday’s gang even arrives, Bilquis is sashaying through House on the Rock after hours. She dispenses with a security guard in her fashion, then runs into The Jinn — who’s also wearing a guard’s uniform — and confesses that she wasn’t formally invited. A moment later, he sees… “Salim. What the f—k are you doing here?” The Jinn says, seemingly angry. “Do you boys need a minute?” Bilquis asks. (Heh.) As it turns out, The Jinn is worried for the former salesman. “This is not a safe place, not tonight,” he says. “I do not grant wishes,” Salim gently reminds him.

Outside, Mr. Nancy suddenly appears at the gate and helps Shadow & Co. gain entrance; as they walk in, he announces that Easter won’t attend the meeting because she’s mad at Wednesday for running over her bunnies like a “rabbit racist.” Laura hangs back to talk to Wednesday, and it becomes clear that he knows that she knows he put her death into motion. Also? He doesn’t seem to care. “You don’t have to be roadkill forever. I’m sure we can come to an arrangement,” he purrs. She’s not interested. Meanwhile, Shadow is irked that Mad and Laura have been hanging out so much, and it shows. 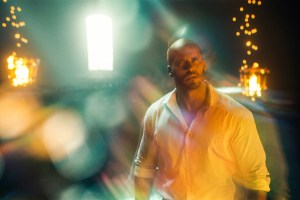 ROUND AND ROUND | About a dozen Old Gods await Wednesday on the carousel, which you’re not supposed to ride, but dude. GODS. Mad, Laura and Salim aren’t allowed on, so they stand there and watch as Nancy, Wednesday and Shadow get a fortune from a machine like the one in Big. Shadow’s seems ominous and mentions “like father, like son,” which is something you’ll probably want to file away for later.

Eventually, the gods and Shadow get on the carousel, which is as magical as we’ve been told. After a few turns, the thing starts to spin like a whirligig, eventually ripping apart and flinging its riders into the cosmos. I know that sounds like an exaggeration. It is not. Shadow wakes up face-down on a beach, and Bilquis is standing nearby, arrayed in queenly finery. She explains that they’re kinda in Wednesday’s head, aka “backstage,” which explains why their surroundings look like proto-Scandanavia.

He follows her inside a building, where she begins to glow in otherworldly fashion. They join a group of similarly shimmering deities, including Mr. Nancy and Wednesday, as well as a women we saw earlier in the episode cleaning rooms as part of Motel America’s housekeeping staff.

Wednesday makes his pitch: The New Gods are trying to replace the old ones, and they’ve got to fight back. But it’s not an instant sell. The housekeeper — who’s really a god of war named Mama-ji — points out that she’s lived in peace for a long time and has no interest in kicking up discord, especially when other “new” gods have risen and fallen. Then Bilquis pipes up and says the New Gods are powerful, but they’ve shown her how to use their tools, and it’s been a good partnership. “I accept my worship, my way, and I grow in power,” she says, essentially handing Tinder its new tagline. “The choice is yours: Evolve, or die.”

Everyone seems rather scattered about the whole thing until Shadow suddenly speaks up: “I believe him.” He says he’s lost everyone he ever cared about, as well as the “light” his mom said he had within him, but “Odin is helping me remember.” He closes with, “Help him remind the people who you are.” 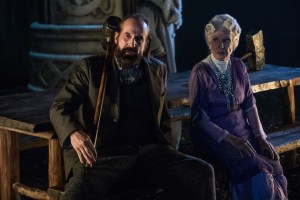 DEITY DOWN! | And just like that, we’re back at the Motel America diner. All of the gods are there in their human guises, eating and making merry, and a flummoxed Shadow asks Mr. Nancy and Czernobog if everyone in the restaurant is a god. They laugh, but don’t answer him.

There’s a lot going on. Laura and Bilquis meet, and it ends with the love goddess planting a kiss on Dead Wife. It’s weird. Then Laura warns Shadow from getting too involved in Wednesday’s shenanigans, but it’s clear he’s sipped the spiritual Kool-Aid. “There’s something special going on here, and I feel a part of it,” he tells her.

Just after Bilquis exits the eatery, we see Mr. World — at Black Briar — make a call to “recover the package.” “Let them know what real sacrifice feels like,” he tells Tech Boy, who’s standing next to him, just as the laser sight from a gun begins passing through the diner. Then the shooting starts, and it’s a holy bloodbath.

I’ll spare you the details of most of the carnage, which is considerable. Limbs are lost. Copious amounts of blood are spilled. Shadow pushes Laura to the ground, then runs out to stop the sniper himself. But that was Mr. World’s plan all along: A UFO-like beam of light centers on Shadow, and then he’s sucked up into an aircraft and carried away.

Of the gods we know, only Zorya Vechernyaya is hurt — but it’s bad. She’s got a bullet through her chest, and Wednesday holds her close as she succumbs to her wound and dies. Czernobog’s grief is swift and furious; he loudly curses her murderer, saying that “no one alive” will kill the assassin. “Is this what it takes?” Wednesday cries out, kissing Zorya on her dead little forehead.

Laura, who herself took a bullet in the arm during the attack, walks out into the parking lot and sees a light pulsing in the sky in the distance, getting farther and farther away. See ya, Shadow!

Now it’s your turn. Grade the premiere via the poll below, then hit the comments with your thoughts on American Gods‘ return.