Whether you’d read Justin Cronin’s novels and were expecting it or whether it hit you like a viral fresh off of 4B, the flash-forward at the end of The Passage‘s Season 1 finale marks a huge leap for the freshman series. And not even the series’ behind-the-scenes staff is immune to the moment’s power.

“That last scene with Saniyya [Sidney, who plays Amy], when she comes up over that ridge and you see her, it was just so moving,” executive producer Liz Heldens tells TVLine. “When I remember the little girl we cast, and she just looks like she’s been through so much. It was crazy!”

The moment jumps the Fox series’ action to the year 2116, in which a slightly older Amy expertly takes out a viral via bow and arrow as she approaches one of humanity’s last outposts. “I have been alone for so long. I haven’t been able to feel you for years and years,” she says, via voiceover, to an absent Brad, adding that if he were dead, she’d know it.

But we’re getting ahead of ourselves. First, a quick recap of the two-hour season-ender. 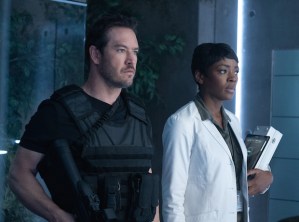 * After Carter bites Lila during the escape from Project NOAH’s Level 4B, Brad throws everyone on an elevator but decides to stay downstairs in an effort to free Sykes and get the vaccine. Babcock gets to her first, and via the mental telepathy thing the virals can do, indicates that she’s not on board with Fanning’s “eat the world” plan. Sykes is making headway with her when Brad enters, guns blazing, and Babcock flees. While the pair of them are trapped by some more virals, Jonas and everyone upstairs debate whether or not to invoke the “Elizabeth protocol,” aka blow up 4B and all of the virals — but also Brad and Sykes — who are down there. Both Fanning and Carter lobby Amy to do something, and finally she does: Crying, she sneaks over to a computer and initiates the protocol. When it becomes clear there’s only two minutes to go, Sykes chooses to stay down on 4B in order to hold off the virals while Brad carries the antiviral up to the surface via a forgotten access pathway. Before she dies in the blast, Sykes and a distraught Richards exchange “I love yous” via walkie-talkie. (The kicker? The avian flu — aka the outbreak that they’d been prepared to use the Project NOAH virus to combat — is now under control. D’oh!)

* The antiviral restores Lila to health. Richards helps her, Brad and Amy escape, but then Fanning grabs Amy. He lets her go, though, because they share a vision of her helping him in the far-off future. Brad, Lila and Amy rendezvous with Lacey, who gives them her truck and bids them farewell as she heads into the chaotic Project NOAH building. There, she finds Jonas, who’s trying to get up the nerve to kill himself. “My name is Lacey Antoine, and I’m here to tell you, you don’t get to die today,” she tells him. “Dying is for the innocent. You have work to do. Today is your day of redemption.” 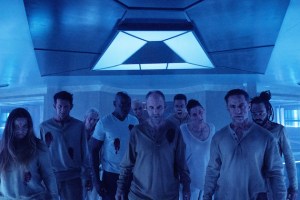 * A month after the virals take over Project NOAH, the country is under viral siege. Brad, Amy and Lila are holed up in a cabin in Joseph, Ore., awaiting a Centers for Disease Control helicopter that will pick up the one dose of vaccine they’ve got left. The three make a happy little family — Brad and Lila have started sleeping together again — but it’s broken up when Lila says she wants to travel with a Doctors Without Borders-type team to get to the CDC in Atlanta. Very reluctantly, Brad and Amy say goodbye to her.

* The virals’ hometowns seem to be the hubs of infection… except for Las Vegas, which was where Shauna Babcock was from. Turns out, after Richards was hurt during a viral fight on the night Wolgast & Co. escaped, Babock offered him the chance to live as her familiar, and he took it. So now he rounds up bad guys, brings them to her in the trunk of his car, and is disgusted while she feeds. They argue. They’re miserable. Then they makeout at the bar where she’s been hiding.

* Jonas and Lacey make it to the Global Health Federation, where they learn that the CDC no longer exists. Jonas tries to reverse-engineer the antiviral, but it takes too long, and other countries make it clear that they’re no longer going to support the United States. “They’re going to bomb us,” Jonas realizes, shortly before he and Lacey get word that the U.S. president and cabinet have been evacuated. Lear injects himself with the cure, saying that if Fanning is going to survive whatever happens, he will, too. “I’m not going to let him win,” he vows. 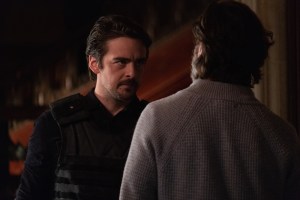 * Fanning appears to Amy and taunts her that she’s more viral than she wants to admit. She denies that she’d ever kill someone, a sentiment that’s quickly challenged when a newly infected neighbor bites Brad. Some other neighbors want to kill Brad to stanch the infection, but Amy goes viral and destroys them in order to save her agent. Horrified by what she’s done to protect him, she injects an unconscious Wolgast with the last dose of serum and leaves him a note saying, “I’m sorry” in her copy of A Wrinkle in Time. As she’s leaving, nuclear missiles fly overhead. Brad wakes up, finds her note and has no idea where she’s gone.

Phew! Now that that’s taken care of, here’s what Heldens had to say about:

IS SYKES DEAD? | Sadly, the answer to this one seems to be yes… though Heldens didn’t rule out a return at some point for Caroline Chikezie. “It was not an easy decision, and we’ve had a lot of conversations about the future, so I don’t know,” the show boss says. “But as far as officially? She’s dead.”

DO THE VIRALS LOOK MORE HUMAN OUT OF CAPTIVITY? | Given that Shauna seemed far more glam in Las Vegas than she had in Colorado, we wondered if fresh air and fresher blood had an effect on the bloodsuckers’ appearances. “The deal with her is, she just looks a little pale and dead under the eye in her resting state,” Heldens says, reminding us that Carter and Babcock appear more refined than Fanning and some of the earlier test subjects, given that they were injected with later iterations of the serum. “And then, of course, she can throw mindscape at you and be beautiful Brianne Howey,” she adds, referencing the actress in the role.

WHAT’S THE DEAL WITH BRAD? | In Cronin’s books, Brad falls ill thanks to nuclear missiles that detonate in his vicinity; he later appears as a viral who is loyal to Amy. As you saw, however, the TV version of Wolgast now has the cure running through his veins. “What is completely working on our show is Brad and Amy’s relationship. It’s just the beating heart of The Passage,” Heldens says. “The trick to Season 2 is: How does that relationship evolve? What does it look like now? What does it look like 100 years later, when they finally reunite in the future?” She chuckles. “I couldn’t kill him. I couldn’t do it!”

LOOKING AHEAD | Though Fox hasn’t renewed the supernatural drama for Season 2 yet, Heldens has plans. If greenlit, The Passage‘s sophomore run will “pick up where the book does, and it’ll be 97 years in the future,” she says, noting that much of the action will take place at the aforementioned human stronghold The Colony. “And then we’ll pick up our characters along the way and find out what has happened to Richards and Babcock over the past hundred years. What arrangement have they made to survive? Where’s Lear? Where’s Wolgast? Where’s Amy? We’re excited.”

Now it’s your turn. Grade the finale via the poll below, then hit the comments with your thoughts!