Arrow‘s leading lady has weighed in on the announcement that Season 8 will be the CW series’ last — and she is a mix of emotions.

In an Instagram post that went up almost exactly 48 hours after the news broke, Emily Bett Rickards explained that she had been “trying to find the words to simply say what the last seven years have meant to me, and I believe this photo sums it up!” Accompanying the post was a snap of the cast huddled for a Comic-Con portrait that was taken toward the very end of a very long day of interviews — just minutes before they then posed for TVLine (albeit with a bit less kissing), as seen in the portrait below: 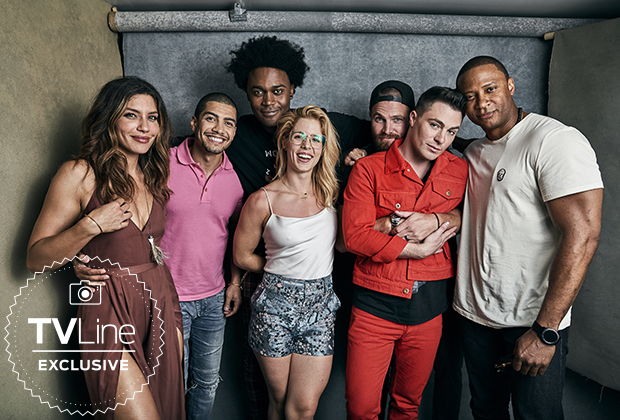 “It’s a cuddle puddle. Everyone here is exhausted and smiling. Everyone here looks at home,” she said of the Comic-Con unity. “Without this show I would have not met the inspiring people pictured here nor those I have gotten to work with and get to work with everyday. People who have become my family.”

Series lead Stephen Amell, along with cast members including David Ramsey, Julianna Harkavy, Katie Cassidy and Katherine McNamara, shared their own reactions to the final-season news earlier in the week.

Looking ahead to the shortened, 10-episode farewell run, Felicity’s portrayer said, “The incredible mind of my friend [Beth Schwartz] will be taking Arrow into its eighth and final season sending it off with pride, power and love….  I’m excited to see what is in store for the story we have been telling. I’m excited and nervous — a combination of emotions Felicity Smoak vibrates at frequently. Needless to say, without the last seven years I wouldn’t have met her.”

To fans, she said, “Thank you to all of you for your massive support, passion and accompanying us on this journey. It’s because of you we found each other.”

What are your wishes for Felicity’s story before Arrow ends?