Before Monday’s Night 3 of The Voice’s Season 16 Blind Auditions, we’d been introduced to a duo (that was sent to The Comeback Stage), a trio (that was recruited by Blake Shelton), a one-woman party machine (Team Blake’s Kim Cherry) and a singer whose soulful vocals were so old-school raw, they could’ve been accompanied by the sound of a needle dragging across vinyl (Domenic Haynes, who, heaven help him, joined Team Adam Levine). But had we met any serious contenders yet? Maybe Team John Legend’s Maelyn Jarmon, whose sublime take on Sting left me buzzing, or Matthew Johnson, whose voice is rich enough to count as dessert. And Monday shone a spotlight on a couple more acts with real potential. Which ones? And what were the evening’s first-of-their-kind Blinds? Read on… 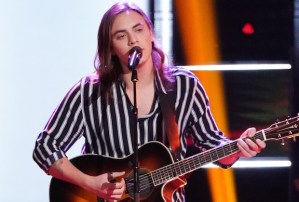 Jacob Maxwell, “Delicate” (Team John) — Grade: C+ | In another of those truly blind auditions where we didn’t see the contestant until he started chairs turning, Jacob made Kelly wonder what his gender was before she swiveled and saw that he was a dead ringer for a young Jared Leto. I wasn’t really wowed by his Taylor Swift cover, though — it was kinda bland and uncertain until he opened up his vocal and hit a bigger note toward the end. “You’re a really pure, beautiful singer,” he was nonetheless told by John, who thought that his new recruit resembled Leonardo DiCaprio and was gonna be “catnip to America.” And he might, if that big note is more indicative of his potential than the kinda tepid ones that preceded it.

Karly Moreno, “Starving” (Team Adam) — Grade: B- | This 23-year-old sk8er girl is bubblier than a glass of champagne. And her performance left me happily buzzed. Her warm, kinda quirky voice reminded me of Colbie Caillat or Jill Sobule (remember “Too Cool to Fall in Love”?). Her eventual coach likened her vocals to those of Regina Spektor. “I think what you do is going to be seriously underestimated,” he added. And I feared that that would not only be true, it might lead to a short stay on the show, especially since I didn’t hear any hints that she could belt a tune if need be. Isn’t that all but a requirement in a talent competition as loud as The Voice?

Carter Lloyd Horne, “Drinkin’ Problem” (Team Blake) — Grade: A- | This 19-year-old from Marietta, Ga., revealed in his pre-interview that, when the stock market crashed, his family suddenly found itself homeless. But he certainly seemed at home on stage. On his Midland cover, he demonstrated fantastic control over a vocal that was so pretty, it was suitable for framing. It also sounded like it could have been coming from someone twice his age — or even 50 years old, Kelly suggested. Blake noted that Carter had had some pitch problems, but I’ll be damned if I heard ’em, at least on first listen. (Maybe I really am as deaf as commenters often suggest!) 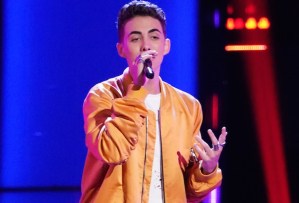 Talon Cardon, “Say You Won’t Let Go” (Team John) — Grade: D- | Before he hit the stage, I thought this 18-year-old Chinese-restaurant waiter had better be a good singer — he couldn’t explain the difference between chow mein and lo mein. In the moment of truth, however, he started off his performance sounding scared to death. He didn’t much improve, either. Yeah, there was an OK note here or there. But overall, Talon was, er, not good. I really couldn’t believe that John turned his chair for any reason other than, “Hey, I’d better get myself a few team members that I won’t be crushed to lose in the Battles.”

Patrick McAloon, “Runaway Train” (Team Adam) — Grade: B+ | The dad half of the show’s first father/daughter duo to audition separately tackled Soul Asylum with an appealing rasp to his voice, good range, great vocal control and the cheerful smile of Reverend Tim Tom from The Middle. And it’s one of the cool things about the show that Patrick was judged, at least at this stage, for his singing and not his appearance, because he sounded like a perfectly credible pop-rocker even though he looked like he was on his way to a PTA meeting. Don’t see him going the distance — he reads more “nice” than “charismatic” — but I’ve been surprised before. (Daughter Ruby, who followed him, didn’t get a chair turn; nerves took hold of the 16-year-old’s voice and made her rendition of “Back to You” wobbly and pitchy as heck.)

Alena D’Amico, “In My Blood” (Team Kelly) — Grade: C | This 26-year-old from Detroit told us that growing up in a big Italian family, she’d had to be loud just to be heard. So as she went on, I hoped we were about to get the rafters-rattling belter I’d been waiting for. Aaand… Well, she did go big, just not as big as I’d wanted. And it didn’t sound like it came easily. (It also didn’t sound entirely pleasant.) After Kelly pointed out that her newest team member could use some reining in to avoid getting pitchy, there was a lot of talk about how passionate Alena is and arguably not enough about how average her performance was.

Dexter Roberts, “Like a Cowboy” (Team Blake) — Grade: A- | From the first note that this American Idol alum sang, he had Team Blake written all over him. He struck me as a little cheesy and overwrought — maybe because I didn’t get from him the sincerity of, say, a Red Marlow — but still, he was as country as a jug of moonshine. The coaches — even Blake — weren’t sold immediately, either. They waited until he began singing in his vibrant full voice on the chorus to start all four of their chairs turning. And that big, beautiful vocal totally made me forget any misgivings I’d had at the start. In the end, of course, despite Adam’s attempt at reverse psychology (“Don’t pick me”), Dexter elected to join Uncle Blake’s team.

Jej Vinson, “Passionfruit” (Team Kelly) — Grade: A | Rounding out the night was this Filipino-American who gave up plans to become a doctor in order to pursue music. And once he began performing his Drake cover, that decision made total sense. His vocals were as smooth as silk sheets; his runs, dazzling; and his range… to be determined. After this audition, I’d guess that the sky’s the limit. Blake suggested that he and his fellow coaches were looking at Season 16’s winner. And Adam advised that if there was anything Jej should be careful of, it was being too flawless. “There is something almost surgical,” he marveled, “about how perfectly placed those runs are.” As if that’s a bad thing!

So, were you wowed by any of the Night 3 Blinds? Were you surprised Luna Searles didn’t get a chair turn? Who do you think is just cannon fodder for the Battles? Vote for your fave in the poll below, then comment away.