“It’s my first day at school!” cried John Legend as he settled in for his freshman  season as a coach on The Voice Monday. And, based on his picks in Night 1 of Season 16’s Blind Auditions, the EGOT winner was going to ace the gig. (Two of the three artists that he recruited for his team got A’s from me — I know, I know, cue the complaints that I grade too easily… I get excited. Sue me!). Which of the first acts sounded like contenders? Read on, and we’ll discuss all of the contestants that got John, Kelly Clarkson, Blake Shelton and/or Adam Levine’s chairs turning, then you can play favorites in the poll that follows. 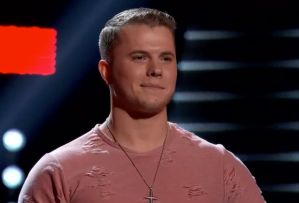 Gyth Rigdon (Team Blake), “Drift Away” — Grade: B | After this 24-year-year-old from small-town Louisiana described himself as primarily country, he got an almost immediate chair turn from Blake. But I think it was as much the richness of Gyth’s voice as the undertones of country in it that swayed his future coach. Gyth’s vocals were strong and effortless — and even included, as Kelly noted, some Janis Joplin raspiness; they also suggested that he was capable of more than we were hearing here. And going forward, it probably won’t hurt that he has big guns and a fun personality, too. (Explaining how he got his unique name, he suggested, “There was a lot of alcohol involved.”)

Maelyn Jarmon (Team John), “Fields of Gold” — Grade: A | Deaf in one ear, owing to infections as a kid, this 25-year-old New Yorker explained in her pre-interview that six months ago, she’d been close to giving up her dream of a music career. Which was almost painful to hear once she started singing — Maelyn has the voice of a freakin’ angel. Her rootsy reinterpretation of Sting demonstrated that she not only has power in her pipes but enough control over them to pack a massive emotional punch. The performance “literally moved me,” said an astonished Blake. It was magical, added John, who ultimately became her coach. Do I even need to mention after all that that she earned the first four-chair turn of the season?

Karen Galera (Team Kelly), “Mi Corazoncito” — Grade: C | Just before going on, this Mexican-American 19-year-old was played an encouraging video message from her enlisted-man older brother/father figure that threatened to ruin her makeup. He was right, though, that she had what it took to make it. Kelly swiveled her chair almost immediately (and John followed shortly thereafter). For me, Karen was fine, and I really dug the instances where she put a bit of growl in her voice. However, she mostly just sounded, you know. sweet. So I didn’t think that this was the kind of audition that would make anybody go, “Ay dios mio!” 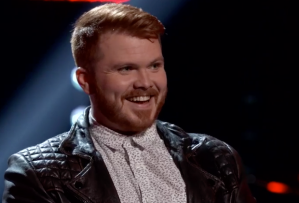 Trey Rose (Team Adam), “Wake Me Up” — Grade: B+ | This 26-year-old redhead from “the middle of nowhere,” Okla., was quick to acknowledge in his pre-interview that Blake had been an inspiration. Yet it was Adam who was the fastest to turn his chair around upon hearing Trey’s jangly Avicii cover. I honestly didn’t know what the heck Blake was waiting for — he didn’t swivel till the song was damn near over, though Trey had poured tremendous passion into it and revealed that he had the chops to sell a country number without so much as sticking a price tag on it! And after a season of Chevel Shepherd and Chris Kroeze pretty much just standing there through every performance, can I just say what a welcome sight it was to see as well as hear Trey’s energetic performance — and this was just for the Blinds! Hated to see him pick Adam over Blake. Eesh.

Kim Cherry (Team Blake), “No Scrubs” — Grade: B | In a first for the show — or at least a first since I’ve been recapping the show — we got to listen to Kim’s performance, but the spotlight wasn’t turned on her until midway through, when Kelly at last turned her chair. And it was pretty fun, didn’t you think, to be forced to react to the Blind Audition the way the coaches did — you know, blind? In any case, beyond the shock of Kim’s raw, raucous vocals and go-for-broke rapping turning out to be coming from an adorkably nerdtastic white chick, her performance was pretty solid. I’m not sure she has the most control of her rollicking voice, but she seems to have some range, and for as long as she lasts in the competition, she’s gonna be a blast and a half.

Rizzi Myers (Team Kelly), “Breathin'” — Grade: A | A full-time songwriter and mother of two, Rizzi was scared off from a career as an artist by fears that she wouldn’t be accepted because of the way she looks (in other words, not a size 0). Bouncing back for the sake of her daughter, she left it all on the stage, singing with the power and precision of a formidable old pro. Arguably just as importantly, she seemed to connect 100 percent with the emotion of her Ariana Grande cover. “And on top of that,” Kelly noted, “you seem fun as hell.” Agreed. Rizzi’s a real showstopper. 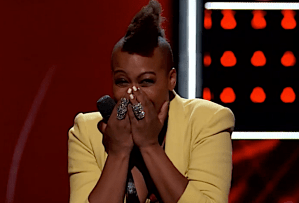 Lisa Ramey (Team John), “Sex on Fire” — Grade: C | After this mohawked 33-year-old didn’t get a chair turn in Season 15 (at a point when the Comeback Stage roster was already set), I was really rooting for her to get a break in Season 16. But her Kings of Leon cover never really, well, caught fire. She showed us again that she has a huge, huge voice, but ironically, there just wasn’t any heat to it. Even her eventual coach — her only chair turn — didn’t relent and swivel until near the end of her performance, as if he, too, was waiting for something that he just wasn’t quite hearing.

Jimmy Mowery (Team Adam), “Attention” — Grade: C+ | Backstories don’t get much more harrowing than Jimmy’s: The man his mother dated while his parents were split up murdered his musically-inclined father after Mom and Dad reunited. As for Jimmy’s performance, eh, there were some pitch issues (enough that even Kelly noted them) and a bad case of the jitters (in particular after Adam turned his chair). But that’s not to say that Jimmy doesn’t have tremendous promise. There’s oomph to his voice, he’s got range, and it was impressive as hell that he could nail that crazy-high Charlie Puth falsetto.

Lili Joy (Team Blake), “Cool” — Grade: B | I love quirky, so of course, I went nuts for this pixieish 15-year-old, who accompanied herself with a ukulele and has a different color wig for every mood. (Frenchy-from-Grease pink is her performance shade.) I also loved what she described as her “alternative/jazzy” sound, which allowed her to reinvent Gwen Stefani’s hit to the point where Kelly had to tell Blake that it was hers. (He later swore that he knew it was his girlfriend’s.) I don’t think Lili necessarily has the range to knock people out of their seats, but I’m totally sold on her song styling and poise. She didn’t sound like a star in the making to me, she just sounded like a star, period. I’d buy that album.

Matthew Johnson (Team John), “I Smile” — Grade: A | For a collections agent, this 25-year-old is miraculously chipper. No wonder his nickname is Mr. Personality! And the second he began to sing, his voice as rich as ice cream you’d feel guilty later about gorging on, he got Blake’s chair turn. And then the rest of the coaches’, too. (Adam even tossed a shoe in honor of JHud.) How could they not react? Matthew ticked all the boxes: power, range and so much polish, you could have convinced me that I’d tuned into a concert rather than the Blind Auditions. As an added bonus, you could totally hear the smile that he put into his Kirk Franklin cover.

So, what did you think of the Season 16 premiere? Grade it in the poll below, vote for your favorite Blind Audition of Night 1, then hit the comments. (Promise you won’t be Blocked.)