Tuesday was only the second night of The Voice’s Season 16 Blind Auditions, and already, I was looking forward to hearing some of the contestants again in the Battles — and not just to reassure myself that I hadn’t graded too generously Monday, they really were/are as good as I thought. (Back me up here — somebody, anybody.) I was also already so enamored of John Legend as a coach that he felt like as much a part of the panel as Blake Shelton’s cup holder. Mostly, though, since I devour the show like the ultimate in guilt-free comfort food, I was just glad to have it back. What was on the menu Tuesday? It turned out, a first-of-its-kind act for The Voice. Read on, and we’ll discuss not only it but all the contestants who advanced to the Blinds. 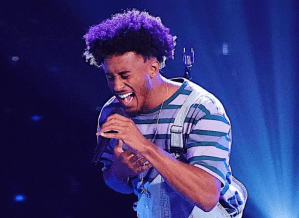 Domenic Haynes (Team Adam), “River” — Grade: B+ | After we learned that this Florida teenager’s dreams of a future as an athlete had been thwarted by an injury, he took to the stage, packing into his vocal the kind of world-weary ache that could only come from the most sensitive of old souls. Adam Levine swiveled his chair within seconds — and Blocked John, who called Domenic his favorite singer so far. In response, Adam suggested that the contestant might be his favorite singer in all 16 seasons. That seemed like a bit of a stretch, especially considering that he’d once coached Addison Agen. But there was no denying that there was something special about both the rawness of Domenic’s voice and his masterful control of it. 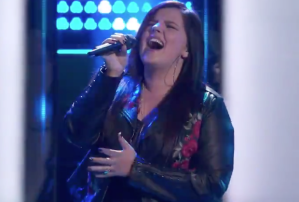 Savannah Brister (Team John), “Don’t You Worry ‘Bout a Thing” — Grade: C+ | In her pre-performance interview, this smiley 17-year-old from Memphis, Tenn., described herself as awkward. But when she took her place behind the mic, Lord, those first notes were so creamy and self-assured, you wouldn’t have believed that she’d ever had an awkward moment in her life. As she picked up the tempo and started putting more oomph into her Stevie Wonder cover, she was less impressive, however. Not bad, just not amazing. And definitely not so amazing that Kelly Clarkson was right to say that Adam Levine, irritating as he can be, “was disrespectful not to turn around” for Savannah.

The Bundys (Team Kelly), “Closer to Fine” — Grade: B | In another instance where we were left as blind as the coaches as the performance began, the trio stunned the Fab Four with their ability to harmonize. But then, of course, they could harmonize — there were three of them! (Going forward, how would that be fair to the solo acts?) Aside from the novelty factor, the siblings’ rendition of the Indigo Girls was really, really lovely and polished. (And those harmonies were delectable.) However, I didn’t think that the performance was all that special. Super pretty? Yes, definitely. Remarkable enough to have justified the inclusion of a threesome for the first time? Eh, no. 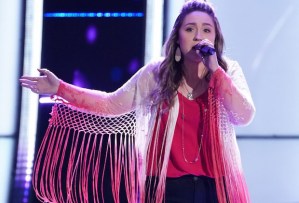 Hannah Kay (Team Blake), “Coal Miner’s Daughter” — Grade: C | Though this youngster from Magnolia, Tex., copped to a crush on Blake in her pre-interview, her story wasn’t all cute and funny. (Are they ever?) She’d been bullied big time for her musical aspirations before making a friend who believed in her… who then passed away. On stage, Hannah took a shot at bringing back classic country, in so doing, demonstrating some raw talent and potential. And actually, the raw, unvarnished quality of her vocals worked to her advantage — I’d totally buy Hannah entertaining a crowd of rowdies at the roadhouse on the edge of town. I’m just not sure that she has enough control over her voice — or wow factor — to make it past the Battles.

Julian King (Team John), “All Time Low” — Grade: B | Before his turn in the spotlight, this Philly 25-year-old described the massive quantities of training that he’d received (not only in singing but dancing) prior to the show. So I had high hopes for his performance. And he was (as his grade of B suggests) very good. He just wasn’t great (and definitely not John-wasting-his-Block-on-Adam great). Parts of Julian’s performance struck me as a little messy. He has some range, though, and obviously, potential. I suspect we haven’t even begun to see what this charismatic contender has to offer yet.

So, what did you think of Night 2’s Blinds? The show’s first trio? Vote for your favorite act in the poll below, then hit the comments.