Eddie and Katherine’s heretofore civil divorce mediations hit a major snag in this week’s A Million Little Things, and the fact that the episode airs on a holiday traditionally devoted to love is just the icing on the heart-shaped cake, no?

Read on for the highlights of “The Rock.” 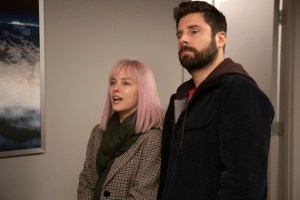 KICK THE BUCKET LIST | Maggie wraps her last round of chemo and has an 80 percent chance of doing well, but ahead of her surgery she wants Gary to take her to Plymouth, Mass. As far as bucket-list items go, it’s fairly tame, but who am I to judge? “I know it’s not exactly skydiving,” Maggie admits, but she and her brother used to pretend a rock in their backyard was Plymouth Rock, so it has emotional significance.

Their departure is delayed three times, all on account of doing favors for their extended friend group. Long story short: They don’t make it to Plymouth during the day. “We can go to Plymouth Rock when I’m well again,” Maggie says offhandedly, but Gary notes that it’s a much more optimistic take than she’s had in the past. “My old bucket list was about the past. My new bucket list is about the future,” she says. OH MY GOD SHE’S GOING TO DIE, ISN’T SHE?

Gary’s good mood takes a real hit later that evening when he gets some bad news about Linda, the salty woman he and Maggie knew from chemo. She had a pulmonary embolism at some point during the day, and died. Gary can’t bring himself to tell Maggie, though. Instead, he insists that they drive to Plymouth Rock that night.

DON’T HATE, MEDIATE | Katherine and Eddie’s divorce mediation is going well enough until the topic of Theo’s guardianship comes up. Previously, it was Jon and Delilah, but now that Jon’s dead and Delilah is preggo with Eddie’s kid… well, you can understand the complication. She leaves the mediation in a huff, but when Eddie drives by a very recent car accident down the street, he realizes that the car tipped on its side belongs to his soon-to-be-ex-wife, and she’s still inside.

Katherine is fine, but she’s taken to the hospital in an ambulance, and a shaken Eddie follows close behind. When she’s home and icing her knee, she reflects on how close she came to not ever seeing their son again, and that reopens the conversation about who will take Theo if they both die. Before you can say “infidelity,” they’re arguing again.

Eventually, though, after realizing Eddie stood up Delilah to stay by her side all day, Katherine softens and offers the guardianship to Gary. He shrugs it off, but Maggie gets serious with him: “If I’m alive a year from now, it’s because of you,” she says, saying that his brand of support and love is exactly what Theo would need. “You didn’t let me say no, so I’m not going to let you say no,” she adds. So he changes his mind and agrees. 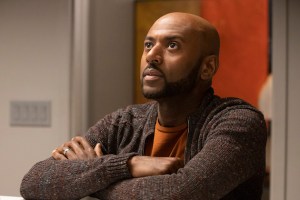 OH, BROTHER | When Rome’s father shows up, unannounced, for an early morning visit, neither Rome nor Regina has a clue what’s up. Pretty soon, though, Dad makes his pitch: Rome’s brother is visiting, and Mom and Dad would rather that he stay with Rome. Rome, however, would not. It seems that his brother, Omar (hi, Saturday Night Live‘s Jay Pharoah!), is a bit of a hot mess who pretty much lives on Rome’s last nerve.

But when the brothers have some alone time playing video games, Omar confesses that he’s visiting without his wife because they’re going to divorce. When Rome tries to sympathize and prepares to tell Omar about his suicide attempt, Omar goes on about their different lives and mocks Rome in a way that makes him clam up.

Later at Someday, Gina nervously wonders which of her customers is the anonymous food blogger rumored to show up that night. So she gladhands the entire place while Rome and Omar dine with their dad. It eventually turns ugly when Rome’s dad makes a snarky remark about his “pills,” so they have a Big Feelings conversation in the restaurant’s kitchen. “I don’t have to worry about you,” Dad says. “Maybe you should,” Rome says, wiping away a tear. “Sometimes, you should.”

At home, Rome realizes that he’s been taking out his anger on his dad. And after Regina goes to bed, the brothers start to open up to each other.

PRYING EYES | While Delilah installs a new car seat in her backseat at the end of the hour, we realize that MaybeBarbara Morgan is watching her from a car across the street. She takes a call from someone named Mitch Nelson, who tells her to leave the situation alone. Then MaybeBarbara tells him Delilah is expecting, which seems like news to her.