Congratulations, Regina! It’s finally time for your restaurant’s grand opening, and all you’ve got to do is double-check the linens, go over the specials with the waitstaff and try to fend off the soul-crushing memories your mom’s mere presence stirs up for you. Bon appetit!

This week’s A Million Little Things chronicles all the last-minute activity that goes into launching Regina’s new eatery (and the aforementioned family drama that Mama brings to the table). Meanwhile, Delilah’s gas-station honey is back! Read on for the highlights of “Someday.”

REGINA LEARNS THE TRUTH | Gary goes to Barbara Morgan’s last known address; the woman who lives there now (hi Drea deMatteo!) isn’t the mystery woman, but she tells Gary that Ashley came by looking for information a while back. Her last name is Nelson, by the way. And when her husband asks about their visitor, she shuts the topic down quickly.

Then we jump back three months. Eddie is home from tour, during which he hooked up with absolutely zero people, to Rome and Gary’s extreme disbelief. Maggie has one more chemo round to go before surgery. Delilah is visibly pregnant, which takes Eddie aback when he sees her. And Regina is preparing to open her restaurant, but she’s still waiting on her liquor license and certificate of occupancy. 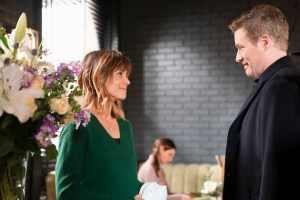 To help move things along on that front, Delilah tracks down the guy she met in the gas station parking lot. He doesn’t just own a bar: He’s a food-and-beverage bigwig named Andrew who owns four bars. And when he shows up after Delilah’s request, we learn that he’s a widower. He quickly procures them a liquor license and a bartending staff; Gary points out that the guy clearly likes Delilah.

Meanwhile, Regina flips out on her mom when she realizes that the money for the restaurant actually came from her Regina’s uncle Neil. (Side note: I have an icky feeling about where this storyline is going.) “Every penny my mother gave us, we’re giving back,” Regina tells Delilah as she walks out. “This restaurant will never open. Not with me involved.”

A TRIP DOWN TERRIBLE MEMORY LANE | At home, Rome summons Maggie to try to help his despondent wife. Regina tells the story of when she was 12 and she wasn’t asked to a school dance. Her uncle comforted her, and then sexually assaulted her. (Yep, that’s where I thought we were headed. Oof.) “I never told anyone that,” she tells them. “I was just so ashamed.” When Regina tried to tell her mom the next day, “All she said to me was ‘You must have misunderstood him. He was just trying to comfort you.'” Regina starts to cry in earnest as she says that maybe she was too flirty. She collapses into Rome, and Maggie holds her hand, and it’s awful to watch. (Nice work here by Christina Moses.)

WHERE IS BARBARA MORGAN? | Gary hires a private investigator who can’t seem to find the Barbara Morgan they’re looking for. But she is a fan of Eddie’s band, so Gary plots to end Eddie’s sex drought by getting the pair in bed somehow.

And though things look like they’re going well when Eddie and Joanna the P.I. hang out, their makeout session ends when he pulls back and tells her that his life is “very confused right now.” Joanna takes it in stride, and they’re saved from more awkwardness by a new lead: A gallery has been selling paintings by B. Morgan — and when Gary and Eddie investigate, they realize Jon bought them all.

NO MORE SOMEDAYS | The morning after her breakdown, Regina tells Rome she has to go confront her uncle and make him know that she’s not taking his money. After all, Jon told her not to “someday” herself out of a life. “I want him to acknowledge what happened and say he’s sorry,” she tells Rome (and Maggie, who’s there for emotional backup) in the car on the way to the hospital where Neil is being treated. Maggie warns her that she might not get the outcome she desires, but Regina is resolute.

When she gets to the hospital, his room is empty: “Your uncle died a couple of hours ago,” a doctor tells her. “I’m sorry you didn’t get to say goodbye.” As Regina’s mom shows up, Maggie points out that maybe the reason her mother couldn’t hear what her 12-year-old daughter was telling her way back was because Neil hurt her, too.

While Regina and her mother have a fraught conversation outside the hospital — it ends with them both crying and hugging — Rome tells Maggie he’s going back on the antidepressants. “I’m proud of you,” she says. “I’m proud of her,” he replies. Then the trio, plus Mom, is on its way back to Boston: Regina is opening the restaurant! 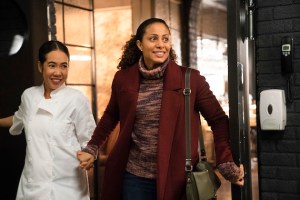 OPENING NIGHT | The restaurant is called (wait for it) Someday, and it opens to a giant, happy crowd. Everyone helps out on opening night. Gary is a waiter, Rome serves as maitre d’ and Eddie (hilariously) washes dishes. At the end of the very successful evening, Regina tells her mother that she’s going to donate Neil’s money to a women’s shelter, and that Andrew might want to invest in the eatery. Her mom responds that she’s super proud of the restaurant’s big night, and Regina cooks her scallops for dinner.

BUT WAIT! | Remember how the woman at Barbara’s old address said she wasn’t Barbara Morgan? Well, at the end of the episode, she’s watching the video Jon made and sent to her. And she’s got B. Morgan’s paintings on her walls. Make of that what you will.