As A Million Little Things viewers are now aware, Constance Zimmer is not, in fact, the ABC drama’s mystery woman Barbara Morgan. But she knows who is.

In an interview with TVLine, Zimmer explains that AMLT creator/showrunner D.J. Nash, with whom she worked on NBC’s Growing Up Fisher, divulged all of Season 1’s secrets while pitching her the role of Jeri. In this week’s episode, Jeri is revealed to be a Cambridge city council member who collaborated with Jon on the subway vote; she’s the one he’s yelling at on the phone in the flashback to the morning of his suicide.

Thursday’s hour depicted Jeri feeling so guilty that she’d inadvertently contributed to Jon’s despair that she worked with Ashley to get the mass transit vote back on the table. And though Jeri assured Delilah that the rescheduled vote would come out in her favor, making the real estate Jon bought far more valuable, the city council ultimately decided not to go through with installing a new subway stop near Jon’s old apartment. (Don’t worry: Delilah listened to her gut, instead, and sold the property to an interested buyer minutes before the vote took place.) 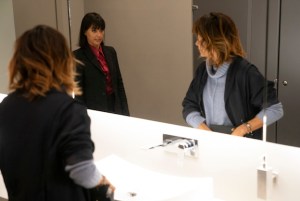 When we admit that we saw Zimmer in the crowd at Jon’s funeral and assumed she was Ms. Morgan, she laughs. “I loved the idea of [Nash] using the fact that I was a somewhat recognizable face,” she says. “And to your point, you see somebody do one line in a pilot and you think, ‘Well, that person is going to have a bigger part, because why would they do that?'”

She adds: “It’s been fun to watch the build of it all. [Nash] kept saying to me, ‘If we can pull it off, this is going to be awesome,’ and I loved it.”

Jeri’s involvement in Thursday’s episode also forwarded the emotional development of Delilah, who “is coming out from under the ceiling of guilt and realizing she needs to start moving ahead and moving on with her life, doing something for herself and not constantly looking to do something for others,” Zimmer says.

Which is altruistic and all… but now that we know Zimmer’s character’s name, we’re thirsty for more details. No, she wouldn’t give up the goods about the real Barbara Morgan, but here’s what we could eke out of the charmingly cagey actress:

* “She’s a good person. Nothing was done in spite of [anyone] or for her own good. It really was for [Jon], and then when she was the last person to talk to him, that guilt then catapults her into doing even more that she shouldn’t have done.”

* Jeri and Jon’s interactions were purely professional. “There’s certain people that you click with or connect with in business dealings, and I think that was their relationship,” she notes. (What? It’s a primetime drama — we had to ask!)

* Did Jeri ever see the inside of Jon’s secret apartment? “I’m going to say that I don’t think so,” Zimmer says.