We hate to say it, but we now see the twisted wisdom in what This Is Us‘ Nicky keeps saying: Maybe Jack never should have come to get him in Vietnam.

Heartless? Probably. But go down this rabbit hole with me. If Jack hadn’t brought Nicky to camp, that boy from the village might not have died. And if Nicky had managed to survive the war without overdosing or getting himself killed, there could have been more of a chance for the brothers’ reconciliation, given that blame for the child’s death wouldn’t have been a factor.

Continuing that thread: If Jack hadn’t hidden his brother’s continued existence from his family for decades, perhaps Kevin wouldn’t have put so much significance into coming to the rescue of his estranged uncle, who really didn’t want to be saved. And then possibly — possibly! — Kev could’ve come out of this week’s episode with his sobriety intact.

But wishes, horses, beggars, yadda yadda. The hard truth is that Kevin’s self-appointed mission to salvage Nicky and his relationship with the family fails in “Songbird Road: Part Two,” leading a discouraged Kev to take his first drink since leaving rehab. Read on to find out what else happens in the hour. (And make sure to check out what star Justin Hartley had to say about the episode.) 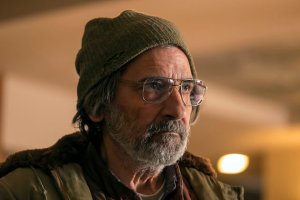 RESCUE MISSION UNDERWAY | We pick up with Kevin, Randall and Kate still in Nicky’s trailer after finding him sitting with the booze and the gun. With his hand on his uncle’s shoulder, Kevin softly says, “C’mon. You’re spending the night at the hotel with us.”

They all relocate to where The Big Three are staying, but Nick doesn’t seem interested in doing anything other than sleeping. In the hallway outside his room, the Pearson kids have a conference. Kevin insists that they have to help the older man, given that he’s shown strong signs of post-traumatic stress disorder and alcoholism. Kate gently points out that Nicky has been living that way for years, and maybe a huge change isn’t the best idea? When they all agree that someone’s got to fill Rebecca in — though no one wants to do it — Kevin gets pissy as he says he’ll call their mom.

By breakfast the next morning, Kevin hasn’t slept. He’s spent the night looking for nearby places that offer resources to veterans. But Nicky seems far more interested in dumping a pound of sugar on his cereal than in seeking treatment. And then someone walks up to their table. “I’m Rebecca,” Mama Pearson says, not very warmly, to Nick. “I was Jack’s wife.”

KEVIN’S SOFTER SIDE | Rebecca is taken aback by how much Nick’s eyes resemble Jack’s. She wants to know if he knew about their family, which is when Nicky reveals the visit we saw unfold in the previous episode. (It took place in 1992, we learn.) “He seemed very happy,” Nicky says, seeming very uncomfortable, then excuses himself to go outside. Based on the looks on the remaining Pearsons’ faces, Jack never told any of them that his trip to the lumber supplier was a sham. 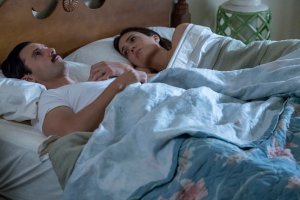 In a flashback to right after Jack got home from seeing Nicky, we see he had trouble sleeping. And the next morning, he was a little zoned out. So Rebecca took one for the team and volunteered to drive Kevin to the mall for a baseball-card signing.

Jack “was acting so strangely,” present-day Rebecca says, adding that it was close to Valentine’s Day.

The episode toggles between the flashback and the present-day, but for simplicity’s sake, here’s what happened on that day after Jack returned. Kevin was his usual bratty self while in line for the signing. Rebecca missed the actual moment her son met the player because she had to pee, but when she came back, she watched from afar while her surly son was all smiles and chatter with the Pittsburgh Pirates’ John Smiley. But when he was done, Kevin wouldn’t tell her what they were talking about. So she asked Smiley, who told her that Kevin had heard the rumors that he was going to be traded to the Minnesota Twins and had looked up some suggestions of what to do in his free in Minnesota, based on the hobbies listed on Smiley’s rookie card. Rebecca was taken aback a) to see evidence that pre-teen Kevin had the ability to be kind and considerate and b) to realize that her non-Randall son knew how to research something.

Meanwhile, what was going on at the house was a whole other story. 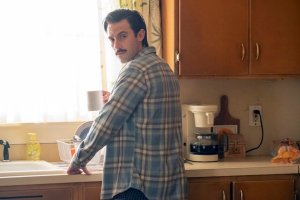 JACK BLOWS UP | Jack begged out of helping Kate and Randall make Valentines for their classmates. Randall knew something was up with his dad, but Jack continually insisted he was fine. He left the kids alone in the house while he went out in the back to lift weights/burn off some of his unease, telling them to order a pizza for themselves when they got hungry. (Side note: Randall’s calling the pizza place and telling them “Hi. I’m an adult” in a deep voice is one of the few moments of levity in this episode.)

When Jack returned inside, though, he flew into a rage upon seeing how messy the kids’ card-making activities had become. He scooped up the pizza they were eating and stomped into the kitchen; a moment later, the kids ran in after hearing a plate break. Jack mumbled that the dish had slipped out of his hand, but the pizza stain on the wall far from where he was standing told the truth: He’d thrown it.

A little while later, a much-cooler Jack apologized to his son and daughter, saying he was tired. Kate and Randall forgave him. And then Jack started a goofy sequin fight with the kids, which Kevin eagerly jumped into when he and Rebecca return home. 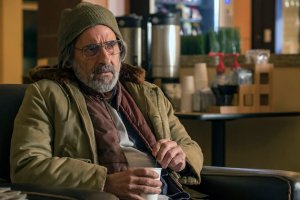 NICKY SAYS ‘NO, THANKS’ | Back in the present-day storyline, Kevin talks a big game about getting Nicky help. But you can tell from the looks on Randall and Kate’s faces that they’re going to bail, and soon. Kate says she has a doctor’s appointment in California the next day. Then Randall brings up a (kinda lame) point that Beth needs him around for moral support while she’s unemployed, adding “I can’t just camp out in some hotel with an uncle that doesn’t want our help and who did didn’t want us to know in the first place.” Kevin’s temper flares, but he immediately apologizes, then turns to Rebecca: “Looks like it’s you and me.”

Later, Nicky visits a counseling center with the remaining Pearsons, but it’s clear he’s only doing so to be polite. Nick tells his nephew that he’s seen counselors before, with no success. “I’m a drunk,” he says. “Also, I can’t seem to leave my trailer without getting the shakes.” On their last night at the hotel, Rebecca tells her former brother-in-law it’s time for them to talk.

While Kevin goes to Nicky’s trailer to try and clean things up, Rebecca tells Nick she didn’t want to meet him “because I didn’t want to unravel what Jack had always told me.” She tries to eke some childhood memories out of him, but no dice. Then she tells Nick that his brother was newly sober at the time of his death and that he might have found his way back to him. “You still have a chance to make things right, because I’m here, and his son is here,” she says, adding that Kevin has had a tough year and is just worried about his uncle. “Let me get this straight: The message is, ‘Shape up, Nicky, because the kid needs a win?'” he snaps at her. I know he’s being mean. I know Rebecca is just trying to make things better. But OH MY GOODNESS YES, PEARSON FAMILY, NOT EVERYONE NEEDS YOU TO SWAN IN AND RESCUE THEM. She gets up and leaves.

Outside, a chagrined Nicky stops Rebecca’s apology about invading his space to tell her a story about how what a great builder Jack was, even as a kid. “I used to be a person,” he tells her dejectedly. “I wish I could be that person again. But it’s been so long, I don’t think I can.” Then he cries a little as he says by way of parting, “You guys were all he ever wanted.” 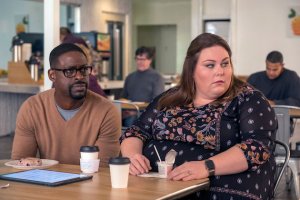 THE PLATE DEBATE | Let’s put a pin in that and check in with Randall and Kate, who decide to swing by their old neighborhood before taking Kate to the airport. Their old house isn’t there anymore, of course, but they knock on the door of the new home and ask if they can come in. The family that’s there now says no, given that they’re in the middle of an emotional argument — and given this show’s history, I half expect them to get their own backstory episode next season — but they eventually change their minds and let the Pearson siblings in to look around.

While they’re exploring, Kate reminisces about the sequin fight and what an awesome day that was. Randall’s all, “Um, broken plate?” She maintains that never happened. Then they proceed to have a fraught family discussion that goes on far too long until the home’s new inhabitants, having apparently come to their senses, politely kick the pair out.

“Did I misremember our entire childhood?” Kate wonders in the car afterward. But Randall reassures her that Jack so often made things good that that is what she remembers.

When Randall gets home, he greets his daughters (“Angelica, Eliza, Peggy” — ha!) and then is surprised to see an agitated Beth heading out the door: Her mom hurt her hip again, so she and Zoe are going to see how she’s doing.

DON’T DO IT, KEV! | In Bradford, Kevin drives Nicky home and helps him fix his leaky roof. Nick says he’ll go to at least one meeting at the vet center, which is something. And he wishes he could tell Kevin that he’s willing to be fixed, “but you and your family, it’s just too painful.” So they shake hands and say maybe they’ll meet again, then Kevin leaves.

In the car home, Kevin looks despondent. Rebecca gives him a pep talk about how he should feel good about doing what he set out to do. But she’s not aware of what happened when he was at Nicky’s trailer all by himself: Thanks to a flashback, we know that Kevin wound up drinking a lot of the liquor that was sitting on Nicky’s table, and has had his first relapse.