Killing Eve‘s cat and mouse are headed in opposite directions as Season 2 opens… but the chase is still on.

The stars and producers of BBC America’s breakout hit thriller brought a tantalizing sneak peek of the sophomore season — debuting Sunday, April 7 at 8/7c — to the Television Critics Association winter press tour on Saturday, and in the advance footage screened for reporters, we see the immediate aftermath of Eve and Villanelle’s bloody season finale confrontation. 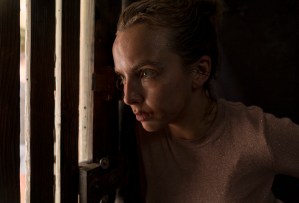 In the sneak peek, Eve reconnects with her handler Carolyn on a park bench and admits she went to find Villanelle in Paris (Carolyn: “What’s her flat like?” Eve: “Chic as s–t”), while a fleeing Villanelle recovers from her stabbing, pouring vodka on her knife wound. She ends up in a hospital, telling her fellow patient that a woman stabbed her. “Women don’t stab,” the boy says. “It surprised me, too,” Villanelle replies, adding that “she did it to show me how much she cares about me.” We also see flashes of Villanelle stabbing a new victim and wearing crazy new outfits… before she and Eve end up on opposite sides of a door once again.

That fateful confrontation between Eve and Villanelle that ended Season 1 “affects them and changes them in a way neither of them are quite expecting,” star Jodie Comer told reporters. “We see Villanelle in a completely different way” in Season 2. “She has no control of the situation.”

“You see them vulnerable in slightly different ways,” her co-star Sandra Oh adds. “They’ve crossed a line” with that bloody showdown, and “there’s no going back.” Viewers will be able to tell just how different the famously fashionable Villanelle is in Season 2 based simply on her wardrobe choices, she notes: “You see her in a completely new, vulnerable setting, and her clothes are completely different… You’ll see, when she moves out of that vulnerable setting, how much her clothing means to her.” 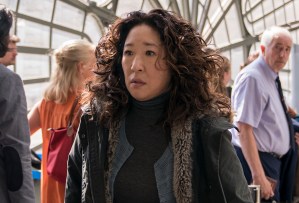 Season 2 also introduces a few new members of Eve and Carolyn’s investigative team — and maybe even a new killer on the loose. “Both Eve and Villanelle’s worlds have exploded,” new showrunner Emerald Fennel hints. “They’re putting their worlds back together again, which necessarily pulls different people into their orbit.”

But of course, this being Killing Eve, those different people might not survive very long. “A lot of people come… and they go,” Oh ominously teases. In fact, given the huge buzz that Eve‘s freshman season has generated, “we now have people who want to be a part of the show,” Comer reveals… “and want to be killed.”