A spectacular first season of BBC America’s Killing Eve ended with another face-to-face showdown between Eve and Villanelle — but did they both survive it? 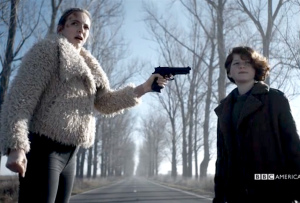 Villanelle has kidnapped Konstantin’s mouthy daughter Irina, and they make quite a pair, shouting in each other’s faces and threatening to kill each other. (Which makes sense; Villanelle is basically a ten-year-old, emotionally.) While they bond over fast food and their ability to speak multiple languages, Eve and Kenny stumble upon Konstantin in Carolyn’s hotel room — hello! — and he insists all he wants is his daughter back safely. “She’s so annoying,” he says, as he fights back tears. (What a brutally honest portrait of fatherhood!)

Eve has a hunch that Villanelle will be heading to Anna’s, and Konstantin volunteers to drive her there — while downing multiple mini bottles of whiskey, mind you. And Eve was right: Villanelle uses Irina as a diversion to sneak inside Anna’s apartment and rifles through her stuff, finding a coat Villanelle bought her, with a note inside reading “Sorry Baby.” (So she does that for all her female obsessions, then?) When Anna catches her, Villanelle points a gun at her former lover with a savage look in her eye. But Anna is tender, and offers to patch up her wounded face where Konstantin bopped her with that log. “It does sting a bit,” Villanelle admits, dropping her weapon. 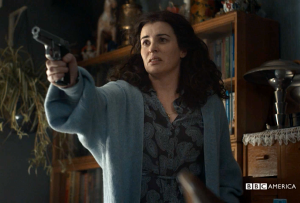 While Villanelle is reminiscing about “the best sex we ever had” on a nearby chair, Anna pulls her own gun — and Villanelle just laughs her off. She doesn’t have the guts to actually pull the trigger, Villanelle declares, and she points her gun right back at Anna, telling Irina firmly that “I don’t love her anymore.” Anna ends the stalemate by placing the barrel of her gun underneath her own chin and pulling the trigger… but Villanelle doesn’t seem very broken up by the suicide, does she? Instead, she and Irina grab what cash they can and head out for lunch, with Villanelle pointing out vulnerable passersby for Irina to pickpocket. Villanelle’s not a bad person, though, Irina decides — “because you are sad, and sad people are usually good, because they feel things more.”

Back in the car with Konstantin, Eve demands to know why Villanelle wants to kill him. “If I told you, I would really have to kill you,” Konstantin laughs, and Eve laughs, too, before agreeing to his terms: “OK!” She also spots a gun in his glove compartment, and when he stops the car to take a leak — too many whiskeys — Eve points the gun at him. He holds his hands up dutifully, but reminds her: “I have to put it back.” (He does, after briefly flashing Eve.) He admits he recruited Villanelle from prison for a “private organization,” but they’re interrupted when Eve gets a call. It’s Villanelle, and she wants to exchange Irina for her passport, telling them to meet her at a local café. 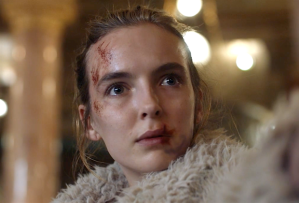 When they arrive, they find Villanelle and Irina nibbling on cookies, and Villanelle puts a gun to Irina’s head as the other customers scatter. She just wants to finish the job of killing Konstantin “so I can go home and have a bath,” and after Eve clumsily hands over her passport and cash — they don’t make it all the way to Villanelle, and a fellow hostage is forced to push them the rest of the way — Villanelle calmly shoots Konstantin twice in the chest. As Irina runs to him, Eve points a gun at Villanelle… and we have a real old-fashioned Mexican standoff. Eve offers to go somewhere and talk, “just you and me,” but Villanelle runs off instead. On the lam, once again.

Konstantin dies from his wounds (no! R.I.P.), and Carolyn hustles everyone to the airport to fly back to London, ready to admit defeat. But after a tip from Elena about Villanelle’s Paris apartment, Eve changes her mind and flies to Paris instead, having tea with Villanelle’s elderly neighbor. The neighbor’s been keeping tabs on Villanelle and sending back reports to someone (The Twelve?), so she’s happy to gab about Villanelle and her “brother” (really, Konstantin). And she’s also happy to give Eve a key, so Eve can snoop around Villanelle’s empty apartment, marveling at the closet full of chic clothes and bottles of chilled Champagne in the fridge.

Something about all this ill-gotten luxury sets Eve off, though, and she goes on a rampage, tearing Villanelle’s clothes out of the closet and smashing Champagne bottles on the floor. This outburst seems to summon Villanelle, because suddenly she’s there, gawking at the mess: “Did you have a party, or something?” Eve says she’s going to kill her, but Villanelle scoffs: “No, you’re not… you like me too much.” Eve relents and admits, “I think about you all the time.” Villanelle says she does, too: “I masturbate about you a lot.” (TMI, Villanelle.) Eve collapses on the bed, utterly exhausted, and Villanelle lies down beside her, congratulating Eve for finally tracking her down. A happy ending, right? 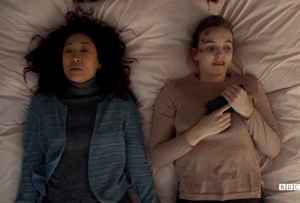 Well, maybe not. Because after Villanelle promises not to kill her, she rolls over to face Eve, who whispers, “I’ve never done anything like this before”… and stabs Villanelle in the gut with a switchblade (!). Villanelle cries out in pain, begging Eve not to pull the blade out… but she does. Instantly, Eve snaps out of it and regrets what she did, running to get a towel to mop up all the blood. But Villanelle isn’t so forgiving: She grabs a gun and fires a few times in Eve’s direction, and when Eve looks up from her hiding place, the old neighbor is there to announce: “She is gone.” And Eve ends the season by asking the question on all of our minds: “Where??”

Alright, now it’s your turn: Grade the Killing Eve finale, and Season 1 as a whole, in our polls below, then hit the comments to share your post-finale thoughts.