It’s been a while, but not that long, since Heléne Yorke was a struggling New Yorker trying to figure out her path… . Which is probably why her take on The Other Two‘s Brooke — the hot mess sister of a teen dreamboat soaring to fame — is so effective in Comedy Central’s new half-hour series.

“I remember getting to New York and riding the subway in the morning to go to a doctor’s appointment, and getting jealous of commuters that were going to their jobs,” says Yorke (Masters of Sex, The Good Fight), laughing. “I was like, ‘You have a savings account! You have health insurance! You have a home with, probably, furniture in it… Man, you have a pantry of spices. You’re so together you have cumin on hand.” 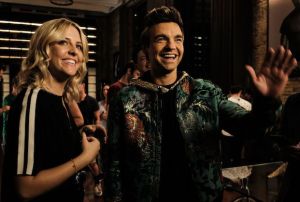 Yorke’s Other Two character, Brooke, certainly doesn’t have any of those things: She and brother Cary (Drew Tarver, Love), an aspiring actor, are aimless late-20-somethings who get thrust into the bizarre world of celebrity when their younger brother Chase (newcomer Case Walker) makes a home music video that goes viral in the manner of Rebecca Black’s “Friday.” Their mom, Pat (Saturday Night Live alum Molly Shannon) is all too willing to let her baby become a pop star, so Brooke and Cary soon find themselves wrapped up in their sibling’s sudden fame and the surreal circumstances it creates.

In tonight’s episode (10:30/9:30c), for instance, Brooke becomes Chase’s assistant and reports to a record-label executive played by guest star Wanda Sykes (see exclusive sneak peek above). “So she latches onto the back of this speedboat. She’s like, ‘OK, let’s do this!’,” Yorke previews. Brooke’s not terribly qualified for the position, but “I don’t think that she has a ton of self-awareness, which is also a really fun thing as an actress to play,” she adds. “It’s also funny, because I mean, how much self-awareness do any of us really have?”

Though Cary and Brooke may marvel at the absurdity of Chase’s quick fame, they’re all too happy to exploit it — yet they genuinely love their earnest little brother; series creators/Saturday Night Live vets Chris Kelly and Sarah Schneider have baked a sweetness into the comedy that cleverly subverts expectations.

“The feedback [from the audience] is universally like, ‘Oh my God, we thought it was going to be bitter, we-can’t-get-it-together-late-20s-early-30s New York kids s–tting on that world, or the kid,'” Yorke says. “And the fact that we don’t is the Number 1 surprise.”

Press PLAY on the video above to watch a sneak peek from tonight’s episode, then hit the comments with your thoughts!