“I often think actors have the weirdest Google search histories,” Outlander‘s Sophie Skelton muses. And she’d know, having spent a considerable amount of time typing in terms like “birthing chair” and “birth sounds” in order to (literally) deliver the goods in the Starz drama’s Season 4 finale.

Skelton says she wanted to make sure that she nailed the scene in which her character Brianna, accidentally pregnant and not-so-accidentally single (it’s a whole thing), labors at her great-aunt’s North Carolina plantation and gives birth to a son. “I’ve never been in a birth apart from my own, obviously, but I don’t remember that, thankfully,” she tells TVLine, laughing. “So I wanted to see what kind of sounds women make. Sometimes in film, it looks like they’re screaming… actually they make like a really low, animalistic sound.” She chuckles again. “It’s quite awful to hear, really.”

The actress recalls that on the day of filming, her online legwork proved useful. “The director and [assistant director] were like, ‘Oh no, I don’t think that’s how you go on it,'” she recalls. “And then they looked it up and they’re like, ‘Oh no, you’re right. You do sit like that.’ I was like, ‘Thanks, guys.'”

And because we know you’re wondering: “You do sort of sit on it like a chair, but you’re propped up, and then all of your weight is in your hands,” Skelton explains. “It was actually quite fun to film. A lot of sweating, a lot of screaming, a very red face.” During a break, a crew member asked if she’d undergone the process in real life, and she replied in the negative. “He says, ‘Wow, it looks like you have. You did very good,'” she says, laughing again. “I was like, ‘Thank you!’ I’m a professional fake-birth-giver now.” 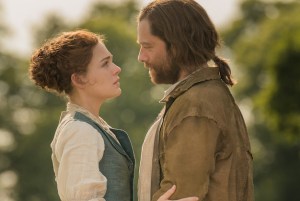 In Diana Gabaldon’s Drums of Autumn, the source material for Season 4, Brianna labors with parents Jamie and Claire attending to the birth of their first grandchild. Some fans of the novels have voiced their distaste for how the Starz series changed the scene; in the finale, Bree is helped by her aunt Jocasta, as well as her handmaid Lizzie and a house slave named Phaedre.

“I think logistically, that was the only way it could be,” Skelton says, pointing out that Bree’s parents were coming home from upstate New York on horseback after locating Roger, the baby’s possible father. (A whole other thing.) In addition, the moment highlights how independent Brianna has become since her trip through the stones. “It’s quite a nice image to have,” she adds with a little pride in her voice, “this young girl, doing this all on her own.”

As those who watched the finale know, Brianna no longer has to go it alone: Her parents have returned to North Carolina, as has Roger. But while the couple’s immediate reunion was a happy one, Skelton cautions that the young lovers’ relationship might yet have some rough patches to smooth over.

“I have a feeling there will be some difficulties, but obviously we don’t know any of that yet,” Skelton says, quickly adding the caveat that she can’t talk about Season 5. “They haven’t really sat down and had any conversations yet. They left on a big fight, and they haven’t even talked that out, and now they’ve got a baby to think of, too… They could put everything that happened aside, or it could complicate things and make things harder.”

She adds: “Hopefully, they’ll be OK.”