Just hours after The CW made Legacies‘ dreams come true with a Season 2 renewal, the residents of the Salvatore School faced a hellish battle in the most vulnerable arena imaginable: their nightmares.

This week’s monster, a “black-winged shape-shifting dream demon” from Greek mythology, played by the rules of Freddy Krueger: whatever happens in your sleep also affects you in real life. This proved especially inconvenient for Landon, who stabbed his own hand to wake himself up, and for Rafael, who dreamt of his abusive foster dad.

Also worth noting: Before Rafael’s nap went south, he was dreaming about Hope, complete with the kiss I half-expected to get earlier this season when they danced after Lizzie and Josie’s birthday party. This added an extra layer of tension to Hope and Rafael’s sweaty sparring session, which already included more giggling and lingering glances than your average trip to the gym. 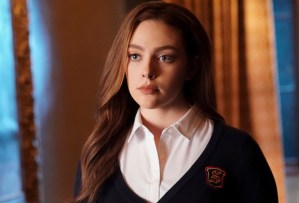 They nearly locked lips a second time when Hope sent the boys into their respective dreamscapes to lure the shapeshifter out. Rafael found himself tied to a tree under a fool moon, where he was greeted by a very eager Hope. Like, strangely eager. So eager, in fact, that he sensed the scenario wasn’t real. “But you wish it was!” the monster shrieked. “And that makes you the worst kind of monster!” (Well, if that isn’t the pot calling the kettle black…)

Landon had his own encounter with the dream demon in an empty classroom — the site of his aforementioned hand stabbing — and he did not come to play. He demanded that the creature reveal its real face, which was somehow even uglier than the skeletal “night hag” mug it had been using as a disguise, allowing Hope to yank it into the waking world. (Again, Krueger rules apply.) But Hope didn’t just summon the damn thing. She also tricked it into a corner, pounced on it werewolf-style and gouged its eyes out with a broken arrow. I’ve honestly never been more certain of her Mikaelson lineage. She earned that badass slow-motion walk down the hallway.

With the demon vanquished and the dreaming done, it was time for Hope to face reality, starting with Rafael. While he understands that she needs to lie Landon in order to keep him safe, he’s also determined to protect him. Therefore, “You and I, we can’t talk like this anymore,” he told her. Hope was clearly bummed to hear about this newly imposed distance between them, but I think we all knew how this love triangle was going to shake out — at least for now.

Hope’s next talk was with Landon, who cemented his place in the TVD-verse with an emotional speech in front of the Salvatore Mansion fireplace. Seriously, from Damon and Elena to Stefan and Caroline — and various combinations of the pairings — how many huge moments have gone down in that one spot? And Landon’s big monologue was no less epic than those that have come before, telling Hope that he’s OK with her keeping things from him. “It’s my job to bust my ass until you see me as someone to confide in. … I’m not going to be afraid of losing you anymore, Hope, because I’m going to be the guy who always fights to find you again.” (Are we sure that Landon was conceived in Malivore and not in some sort of perfect boyfriend factory?)

Unfortunately, Hope isn’t the only person with a major interest in Landon Kirby. That shady gentleman from Triad Industries we met last week remains hot on his trail. And even though Rafael and Landon’s most recent foster parents are magically unable to reveal their whereabouts, they were more than happy to let the shady gentleman into their home to look through Landon’s belongings. We still don’t know much about this guy yet, but I stopped trusting men in suits the day I met Elijah Mikaelson.

* I liked that they evacuated the students to the Lockwood Mansion. I’m always down for an Easter egg.

* I’m also always down for an impromptu musical performance, courtesy of Landon, Kaleb and MG. It felt like a very natural moment, which it was, based on months of behind-the-scenes posts on social media. It’s just kind of what they do.

* Don’t get me wrong, I’ve enjoyed the heck out of these past two episodes, but I’m definitely ready to have Lizzie and Josie back next week. That genie looks like a lot of fun, and I’m very excited to meet Old-laric.

* Generally speaking, this show is impressing the heck out of me. Each episode is satisfying on its own, but I’m also surprisingly invested in the characters’ arcs considering we’ve only known them for half a season. And I can’t say enough good things about the creatures, which are always fun, creative and works of art.