Mystic Falls has seen its fair share of party crashers over the years, but Legacies‘ latest might just take the birthday cake. As if Josie and Lizzie’s sweet sixteen wasn’t bringing enough drama to Thursday’s episode, along came a zombified Jo — aka the twins’ biological mother and Alaric’s almost-wife — to remind us that this show is not to be underestimated.

TVLine spoke with series creator Julie Plec about the implications of this week’s biggest twists — including an update on Caroline’s whereabouts — but first, a quick recap: While Josie spent most of the episode bonding with the mother she never knew, Lizzie remained laser focused on her big night, which turned out to be an even hotter mess than I expected. Not only was Josie buried alive by zombies, but Penelope sealed Rafael in the gym with Hope, leaving him unable to escort Lizzie to her party. MG stepping up as Lizzie’s date felt like a hopeful turn of events (those moves!), but it was heartbreaking when Rafael eventually showed up and took over… only to then tell Lizzie that having sex with her was a “mistake.” (I appreciate that Rafael acknowledged this being a “dick move,” but still. Not the time, dude.) 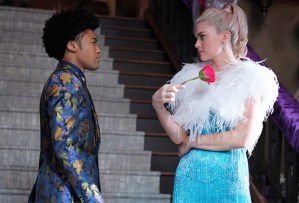 Elsewhere, Hope, MG and Penelope teamed up to rescue Josie, murking countless zombies in the process. (I still don’t know how I feel about Penelope, but I know I loved her kiss with Josie after their scuffle with the undead.) But the victory was shortlived, as Josie had to turn around and say goodbye to Jo, who asked the twins to siphon the magic keeping her alive to restore the natural order. (If you didn’t sob during Jo’s final minutes with her family, you’re a monster.) Pivoting immediately from drama to comedy, the episode ended with the arrival of “The Necromancer,” an over-the-top zombie puppet master with an overinflated ego.

Below, Plec tackles our burning questions from the worst sweet sixteen ever:

TVLINE | Jo’s return felt like an appropriate gift for the girls’ birthday. What will they both take away from her visit?
They’ve both been operating in their little bubbles, Lizzie’s selfish bubble and Josie’s co-dependent bubble. And this episode encouraged both of them to break outside of those, even more Josie than Lizzie. Take a stand. Be special, because you are special. They both evolved emotionally because of this. We got to see a vulnerable side and a human side of both of them that was really nice to see.

TVLINE | Alaric was also his most emotional. How will he affect him?
Alaric’s going to come out of this with vengeance on the brain, and probably a little bit of reckless behavior. That carries over into the next episode, which is fun… until it isn’t. Poor Ric has lost so much in his life. That’s one of the reasons he and Hope have this spirit bond. Outside of the girls’ mother Caroline, he hasn’t been in love since. I look forward to the day he gets to be happy as he promised Jo he would be.

TVLINE | I’m glad Jo asked about the Gemini ritual, which I totally forgot about. How much longer will Alaric be able to keep this from the twins?
Well, what’s fun about that little nugget is that someone who only watches Legacies and didn’t watch The Vampire Diaries probably has no idea what we’re talking about. So they can take it upon themselves to go back and learn, or they can keep watching it and have it play out for them in real time. It will be a secret that Ric will keep close to his vest all season, and it’s information that will be fighting to get out. I think it will be fairly game changing for the girls when they find out what Jo was talking about in that moment.

TVLINE | And now we know why Caroline is really away — she’s looking for a way to keep the girls from having to perform the ritual!
We don’t want Caroline to be an irresponsible mother. She’s a great mother, and she’s always been a great mother to these girls, so if she’s not going to be there for this huge event in their lives, it damn well better be for a good reason. That was one of the reasons we wanted to introduce this secret that she and Ric are keeping from the girls.

TVLINE | I also need to ask about the Necromancer. What’s up with that guy?
[Laughs] This is one of my favorite creatures of the season. The actor is hilarious, and the character is so arrogant and full of himself, convinced he’s the most feared monster in all the land. As we’ve now learned, no one remembers who you are if you come from Malivore, and that’s going to be an absolute gut punch for this guy. It will light a fire under him that might make him more cooperative than some of the other creatures, because he’s pissed and wants answers.

TVLINE | Speaking of wanting answers, I have to know: Was that Hope-Rafael dance just a nice moment between friends, or is Lizzie about to have another reason to hate Hope?
It was a nice moment between two people that don’t have a lot of friends in their life. It could theoretically lead to deeper things down the road, but I’m personally super shipping Hope and Landon, so I’m not going to do anything crazy yet.

Your thoughts on Thursday’s emotional episode of Legacies? Drop ’em in a comment below.