No matter how you spend your Droughtlander, you’re not going to top how Duncan Lacroix is kicking off his.

The Outlander star is traveling New Zealand, backpacking, occasionally hanging out with co-stars and spending a good deal of time in a van he’s dubbed the “Murtaghmobile” in social media posts.

In fact, when TVLine catches up with him to talk about the show’s Season 4 finale — and one very interesting hookup therein — Lacroix has just wrapped a hike. “I just made it to a place where I could take your phone call, just in time,” he says, apologizing for traffic sounds in the background.

As if a little audio interference could deter us from getting the scoop on Murtagh’s unexpected and thoroughly delightful love scene with Jocasta! Read on as we grill Lacroix about Jamie’s gruff godfather and genteel aunt getting it on.

TVLINE | I adored the back-to-back Murtagh/Jocasta scenes. What were your first thoughts upon finding out those two were going to get together?
Only a few episodes before. I didn’t really get the script for that until three weeks before we shot it. I mean, it kind of makes sense… That past history they’ve got. When I first introduced Brianna to [Jocasta], there’s a instant chemistry. Maria [Doyle Kennedy, who plays Jocasta] is such a great actress, as well. It’s just an effortless process. 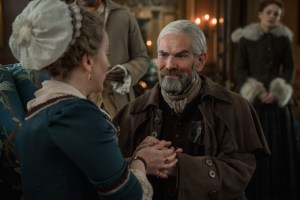 TVLINE | Jocasta and Murtagh have known each other a long time. Did you and Maria talk about how long this attraction might’ve been simmering, and whether it was mutual?
Circumstances what they were, we didn’t even socialize until those things played out in the last episode. We shot them all back to back. We started with, I think, the dinner-table scene, when I come back and I hear about Brianna supposedly getting married to Lord John… We shot the conversation leading up to the whisky in the face. Then it was straight on to the bedroom. [Laughs] It’s kind of similar to other actors, you know, that once we’re on set, we’re trying to stay in character as much as we can. Maria did a fantastic thing: She wouldn’t make eye contact, so she kind of went in blind to me as an actor, as well, between the scenes.

So, it was just purely no run up, no talking about it — which, I think, oftentimes just works out a lot better. You can overthink things with acting… What really worked for me was kind of a lucky dynamic as far as how to go in blind. I think Murtagh, for all his gruffness, in the lady department, he probably isn’t such a hero. The fact that you can take in someone that you’re attracted to without them looking back…There’s a lot of nice things you can play with there. 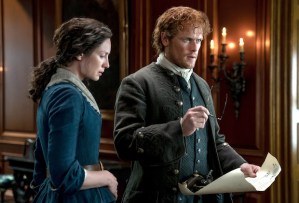 TVLINE | In the moments before the Redcoats arrive, Jocasta and Murtagh have a moment full of longing— and both Jamie and Claire notice. It struck me how that’s not the way we usually see him react to danger; he’s usually far more utilitarian about what needs to be done. Is this a change we’ll see in him moving forward?
It’s interesting — I had to be reminded to look at Jamie, as well. That kind of connection went to come in second. That’s the first time that’s happened with Murtagh. “Remember to look at Sam [Heughan].” [Laughs] …There’s no build-up to this relationship, really. Because obviously, it’s going to throw up lots and lots of problems. For one, Jocasta’s a slave owner, and Murtagh’s just come back. He spent 12 years there as [a] servant, so. There’s also moral dynamics it’s going to throw up. You’re right, he’s been on his own for 12 years. Although he’s got Jamie back, he’s still kind of leading this rebellion with kind of laissez-faire attitude, because he’s got nothing really to lose. I think at this stage, Jamie’s a man to himself now and can take care of himself. He’s got Fraser’s Ridge, so that sort of taken care of… I’ve yet to read the scripts for the new season, but yeah, I can’t wait to find out how that kind of dynamic will play out.

TVLINE | Then there’s the cliffhanger at the end of the episode, that Jamie needs to gather a militia and hunt down Murtagh.
The most wanted man east of the Rockies! [Laughs]

TVLINE | Please tell me that you have one of those wanted posters with your face on it somewhere.
I stole one. Yeah.