After coming out as transgender earlier this season, Supergirl‘s Nia Nal is preparing to reveal yet another side of herself, fighting the good fight as costumed superhero Dreamer. And although she doesn’t officially suit up until the show’s Feb. 17 episode, Nia’s journey towards becoming Dreamer begins this Sunday (The CW, 8/7c) with a life-changing trip to her hometown.

“Her hometown is very liberal, like an alien oasis, a place where humans and aliens have lived together long before Superman or any of the other storylines happened,” actress Nicole Maines tells TVLine. “Growing up as a trans person, it was also a great place for Nia to be. Her family is very accepting and on board with everything.”

Ironically, it’s because of that closeness with her family that Nia dreads returning home. After all, Nia’s sister Maeve believes that she, as their mother’s only cisgender daughter, is destined to inherit her otherworldly ability to dream the future. Learning that those powers are actually beginning to manifest in Nia is sure to come as an unwelcome surprise.

“Nia has been carrying all this guilt over her dreaming powers that we haven’t even known about,” Maines says. “She’s like, ‘I’ve stolen something from my sister and I don’t know how to tell her.'”

Maines is glad that the show is finding a way to relate Nia’s transgender identity with her burgeoning superpowers, adding that she hopes “we get more moments of Nia bringing the trans community into the conversation. This season has mostly been about dealing with racism and xenophobia and immigration; I hope we get to bring more transphobia into the conversation.” 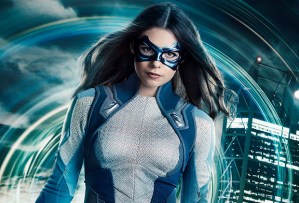 As for Dreamer’s suit, which The CW unveiled online last week, Maines says that putting it on for the first time felt like a “spiritual” experience; it still blows her mind to think that she’s really playing TV’s first transgender superhero. Physically, however…

“It’s a little uncomfortable,” Maines admits with a laugh. “It’s a super tight fabric that loosens up the more you wear it, but it pulls everything back. I’m not used to having good posture, so when I put the vest on for the first time, it was just pulling my shoulders back. Like, I need a chiropractor and I need a back massage.”

Maines describes Dreamer’s fighting style as “similar to Brainiac’s, but less proper. They both have a predictive fighting style. He has his twelfth-level intellect, so he can predict his opponent’s moves. he more she practices her powers, the more she’s able to use them in split-second mini sleeps.”

And speaking of Brainy, Maines promises that Nia will continue to do her best to break through her potential love interest’s dense exterior. “I suck at flirting in real life, so having to flirt with Brainiac is harder than talking to a wall,” she says. “Flirting with Brainiac is like two steps forward, 20 steps back.”