Supergirl will be making history in Season 4. At the CW series’ San Diego Comic-Con panel on Saturday, it was announced that transgender activist Nicole Maines has been cast in the series regular role of Nia Nal aka Dreamer, television’s first transgender superhero.

In addition, the show has tapped April Parker Jones (If Loving You Is Wrong) to play the series-regular role of Colonel Haley and David Ajala (Falling Water) to recur as Manchester Black. So, who are these new characters? According to the show’s official descriptions…

* Nia is the newest addition to the CatCo reporting team. A soulful young transgender woman with a fierce drive to protect others, Nia’s journey this season means fulfilling her destiny as the superhero Dreamer, much like Kara came into her own as Supergirl.

* Hardline career military woman Colonel Haley lives and dies by the orders of her commanding officers. Dedicated to her country, she always acts in its best interest — even if it’s not her own. 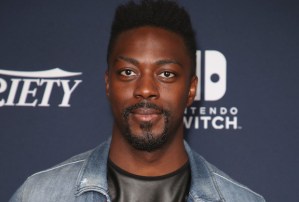 * And finally, based on the iconic DC character, Manchester Black is the type of guy who brings a knife to a gunfight and still walks away the winner. With a dark past, he easily deflects the brutality of his mission with his charm and sense of humor.

Previously, it had been revealed that Supergirl was adding to its series-regular cast Jesse Rath as the Legion of Super Heroes’ Brianiac-5 and Sam Witwer as Agent Liberty. Season 4 kicks off on Sunday, Oct. 14, at 8/7c.