Yes, Fox’s sci-fi drama The Passage is only about to air its third episode ever, but — virals be damned! — series star Henry Ian Cusick isn’t afraid to let us all in on Dr. Jonas Lear’s eventual endgame.

“He has one objective,” Cusick tells TVLine, and it won’t come as a surprise to anyone who watched last week’s installment: “His one, driving force has always been, ‘How can I get this virus, at its essence, to help my wife?'”

Episode 2 found Cusick’s character flashing back to his pre-Project Noah days, when he enlisted Tim Fanning in the efforts to develop the series’ central virus into a healing tool. Jonas’ wife Elizabeth (played by The Following‘s Jennifer Ferrin) adamantly opposed Fanning’s inclusion and implored her husband to stop his frantic research and spend more time with her, instead: She’d just been diagnosed with early-onset Alzheimer’s Disease, and they both knew that her lucidity soon would dwindle into nothing.

Indeed, as we saw at the end of the hour, present-day Elizabeth is an insensate patient at a nursing home who didn’t seem to notice when a sad Jonas paid her a visit.

“He’s desperate to inject her with [the virus], but not the version that he’s using on other people at the moment,” Cusick adds. “But once he perfects that, I’m sure that his wife will be the first one to get it.” 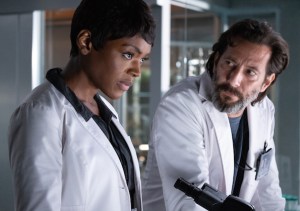 In the meantime, however, Jonas will be preoccupied with Project Noah’s latest guest captive: Amy Bellafonte, who arrives with Brad in Monday’s episode (9/8c). The girl’s presence, as well as what her involvement in the experiment could lead to, causes the rift between Lear and colleague Dr. Maj. Nichole Sykes to widen. “They’ve been working together a long time, so they have a great respect for each other,” Cusick observes. But Lear’s growing unease with testing the virus on uninformed subjects will clash with Sykes’ imperative to curb the flu epidemic that is racing around the globe.