Need to catch up? Check out the previous Passage recap here.

Before we jump into what happened in The Passage‘s second outing, may I point out that Amy Bellafonte is perhaps the most self-possessed — and certainly the most forgiving — child on TV right now?

Sure, she hadn’t had a great life before Agents Wolgast and Doyle lied to her, kidnapped her and then inadvertently tossed her into a shooting match. (OK, that last one was Wolgast alone.) But now she’s on the lam, subsisting on convenience store donuts and facing the very real worry that the person who swore to protect her is going to bleed out in the front seat of their stolen vehicle.

And the worst that this kid can throw at Wolgast is “You owe me a unicorn” to replace the one she won at the Carnival Where Brad Grew a Conscience? Man, what a gorgeous little gem.

Too bad Richards and his federal agents are about to scoop her up like a stray kitten. Read on for the highlights of “You Owe me a Unicorn.”

‘YOU DON’T GET TO DIE’ | We pick up where the premiere left off, with Brad and Amy speeding away from the massacre at the sheriff’s station. They manage to lose Richards & Co., but Wolgast is looking pretty rough, and he’s still bleeding from that wound in his side. Eventually, they pick up a new car. Brad insists he’s fine, but his eyes are slits and he’s visibly clammy; he passes out as he pulls the car onto the shoulder of the road. Amy is understandably freaked out.

In her panic, Amy calls Lila from Brad’s phone. (Unbeknownst to them, Project Noah has tapped the doc’s cell.) “I think he might be dead,” Amy gasps, but once she’s got a small idea of what’s happened, Lila calmly talks the girl through waking up Brad. He’s angry that Amy inadvertently might have given their pursuers a clue to where they’re headed — which is Wisconsin — and violently smashes the phone and throws it out the window.

Later, after he’s cooled a bit, Brad informs her that they’re going to visit a friend of his. He and Amy bicker a bit, until she levels him by saying, “You don’t get to die, and you don’t get to pass out, and you don’t get to not have a plan!,” reminding him that he promised not to leave her. In exchange, she adds as she softens a bit, she won’t leave him. I think Brad seems touched by this, but he’s so pale, who even knows?

MEET SISTER LACEY | They wind up at the home of an “angry hermit” named Sister Lacey. She and Brad met when she taught him land warfare when he was in the Navy; prior to that, she tells Amy, she was a nun. Now she seems content to raise goats, shun her fellow man and stockpile a massive amount of weaponry — and when the perimeter alarm goes off, everyone fears that their number is up. But it’s just Lila, who notes that Lacey is the only person Brad knows in Wisconsin, so it wasn’t that hard to find him. He is happy to see her, and they hug.

Lacey says she can get Brad and Amy to Canada, but points out that they won’t be safe until the public is aware of what Project Noah is up to. Brad makes reference to a situation in the past when he was a whistleblower and it “almost got us killed.” (Side note: Intriguing!) So Lacey volunteers to get the word out while he and the girl get away safe. And though Brad initially objects, he eventually gives her the name of the death row inmates serving as Project Noah test subjects. (Side note: I realize this Lacey is different from the one in Justin Cronin’s book — if you have strong feelings on the matter, make sure you hit the comments at the bottom of this post!) 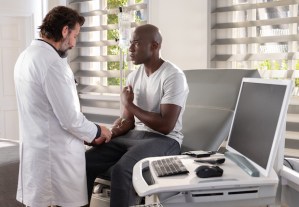 UNHEEDED ADVICE | Back in Colorado, Carter is quickly realizing that what the scientists are doing — testing on humans without their full consent — is illegal. “I’m going to make sure you come through this with flying colors,” Jonas Lear tells him, tamping down his own conflict with the ethical boundaries they’re crossing. Then Lear flashes back to Cambridge, Mass., in 2015, when his wife, Elizabeth, had recently been diagnosed with early-onset Alzheimer’s Disease. His desire to find this cure-all vaccine, you see, was driven in large part by wanting to end her illness. But in the past, when Jonas plans to meet with their old college friend Tim Fanning about it, Liz begs him not to, calling Fanning an egocentric credit-grabber with a history of substance abuse.

But Lear goes anyway… and Fanning is unimpressed by what his friend presents. However, when Jonas mentions that Elizabeth is ill, Fanning is visibly affected. And as Lear explains what he’s found so far, Tim is suddenly gung-ho about the project — provided Jonas lets him “do my thing where the funding is involved.” Translation: He gets the United States Department of Defense to pony up a LOT of money for the vaccine, provided that the scientists can “fast-track” (aka break a lot of ethical rules) the research. Liz is staunchly opposed. “You will look back on this with searing regret,” she tells her husband, adding that he’ll want to discuss it with her, but he won’t be able to because her disease will be too advanced by then.

Near the end of the episode, in the present-day, her warning bears out: Jonas visits the home where Liz is being cared for, and she is completely out of it. “You were so right,” he tells her sadly. 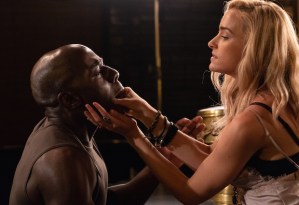 SCORE ONE FOR THE VIRALS | Elsewhere at Project Noah, Carter has dreams that feature Tim and fellow test subject Shauna Babcock. He envisions them all in a bar, where a normal-looking Shauna advises the newbie to do “whatever he says.” The “he” is Fanning, who pours glasses of blood for both of them. Shauna downs hers but Carter refuses; she then reaches into his mouth and pulls out a tooth. “You pay with yourself,” she advises him.

Later on, Carter reports to Jonas that he’s feeling amazing physically, but that Dream Fanning gave him a message for Jonas: “You already changed the world. You just have to wait and see how.”

And in Shauna’s cell upstairs, she finally has enough of the abuse that a misogynistic custodian has been throwing her way. When he gets close to her cage, lured into a sense of false security, she grabs him and sucks his blood while Grey, another custodian, watches in horror.

WOMAN DOWN! | At Lacey’s, Lila patches Brad up and is a little unprepared when her ex-husband starts apologizing for how he “failed” when their daughter, Eva, died. “I just stopped believing in anything,” he says, adding that Amy is the first thing he’s believed in since Eva’s passing. They’re both near tears as they talk about how Amy is a lot like Eva, and then they kiss.

Later, when Amy can’t sleep, Brad correctly guesses that she’s thinking about her mother. He offers to read aloud to her until she falls asleep, and then starts in on A Wrinkle in Time. (The kid’s even got good literary instincts!)

But when one of Lacey’s contacts leads Richards to her compound, Brad and Amy’s bucolic rest stop is compromised. Richards and a bunch of Project Noah goons start shooting at the house; Lacey, who is helping Brad defend the home, takes a bullet and falls. As Lila and Amy hide in the back, Brad realizes he’s lost, so he puts down his weapon and exits the front door with his hands up.

He says he’s put Amy on a boat to Canada, but Richards doesn’t believe him. And just as the goon is about to shoot his former co-worker in the head, Amy runs out, surrendering herself. “You don’t leave me, I don’t leave you,” she tells Brad, who is gobsmacked. Richards (dumbly) doesn’t order a sweep of the house, and then Amy and Brad are manhandled into the back of a van. Colorado, here we come!

Now it’s your turn! What did you think of the episode? Hit the comments with your thoughts!