The good news? The cure for every single illness in the world has (maybe) been found. The bad news? The cure — or rather, “cure” — turns its subjects into bloodthirsty monsters. 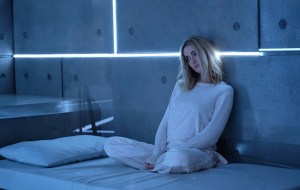 As Monday’s premiere of Fox’s sci-fi drama The Passage opens, scientists at a clandestine government facility deemed Project Noah are working hard to figure out how to turn off the part of the virus’ nastier aspects; because no sane human being would volunteer to be a test subject, the docs work on Death Row inmates. To date, by the way, all patients have had the same trajectory: extreme good health, followed by decline, followed by complete transformation into vampire-like creatures the show terms “virals.” 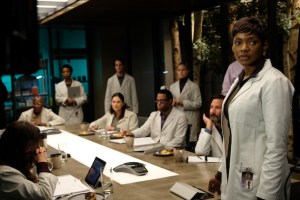 It’s the job of Agents Brad Wolgast (Mark-Paul Gosselaar, Pitch) and Phil Doyle (Zach Appelman, Sleepy Hollow) to convince the prisoners to sign onto Project Noah. They’re company men who are good at their job… until they’re tasked with picking up a young, parent-less child named Amy Bellafonte (Saniyya Sidney, Fences), whom Project Noah scientists theorize might be the key to conquering the cure: The younger the test subject, the better the results, they reason. 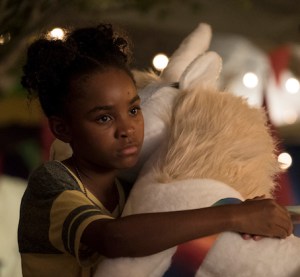 But essentially kidnapping a child and making her into a lab rat doesn’t sit well with Wolgast, whose young daughter died a few years back and whose marriage eventually ended because of the trauma. So when he and Doyle nab Amy — who is a smart, savvy firecracker of a kid — Wolgast quickly decides that she’s never going to make it to Project Noah’s headquarters… because he’s going to hide her. (For her part, Amy instantly trusts Brad and happily agrees to his going rogue.)

The pair ditch Doyle at a carnival but quickly realize that Project Noah isn’t going to let them fade into the background. After Brad calls his ex, Lila (Emanuelle Chriqui, Entourage), and realizes Project Noah henchmen are at her house, he changes plans: He’s going to turn himself in to local police in order to keep Amy in the public eye and therefore safe. 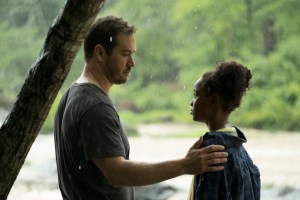 The problem with that notion? Project Noah infiltrates the police department, leading to a massive shoot-out with Brad. Wolgast and Amy eventually escape, but he’s badly hurt, and the episode ends with them speeding away from Project Noah security thug Clark (Vincent Piazza, Boardwalk Empire) and his goons. “It’s gonna be OK,” Brad reassures his young passenger. “I’m not gonna leave you. I promise.” Then, in a voiceover that subtly alludes to the book series’ very long timeline, Amy says, “Of everything that happened, this is the part I think of the most. Whatever was coming, we would face it together.

Now it’s your turn. Grade the premiere via the poll below, then fill the comments with your thoughts!