The Roger MacKenzie who entered the Mohawk hut at the start of last week’s Outlander wasn’t the Roger MacKenzie who charged back into camp to stop Father Alexandre’s suffering at the end of the episode — and series star Richard Rankin says we’ll see more evidence of Roger’s “evolution” in Sunday’s season finale.

“It’s important that I marked that transition quite clearly. Now what we have is a very changed man,” he tells TVLine. “The audience should be seeing Roger now as a very different person.” 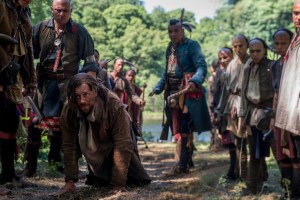 Viewers will remember that Roger gave an impassioned speech to Alexandre, a fellow captive of the tribe, about how his painful pursuit of Brianna through space and time — literally! — taught him self-preservation. “Look out for Number 1,” he told the condemned priest. “From now on, that’s me.” But after escaping from the Mohawk, Rog later threw away his own freedom to run back and toss a barrel of alcohol on the flames, an act of mercy that hasted the tortured holy man’s death.

“The irony in that is that he’s saying all these things and ‘look out for Number 1’… but then he almost immediately goes and contradicts himself,” Rankin observes. “Because he’s not looking out for Number 1. He basically goes into quite a suicide mission. Because the thing with Roger is, he’s so compassionate, he wears his heart on his sleeve. He can’t bear the thought of someone else being in any pain or discomfort.”

Unfortunately, that instinct may land the historian in even greater peril in Sunday’s Season 4 finale (Starz, 8/7c. When Jamie and Claire’s attempts to rescue him don’t go as planned, there’s a very real chance that Bree’s biggest fear — that Roger won’t return — could come true.

And even if he does… will Brianna even recognize her baby’s (possible) father? Rankin says Roger’s travails have marked him for good.

“If you look back [in] Season 2, and stuff in Season 3 — and even the beginning of Season 4 — we should see a very different character,” he adds.