Outlander‘s Brianna and Roger each make questionable choices for good reasons in this week’s episode. But when the haggis hits the fan, will their right-headed intentions matter? (Spoiler alert: They probably willna.)

Meanwhile, in Wilmington, Fergus has decided that it’s time to break Murtagh out of jail — and you might be surprised to hear Marsali’s thoughts on the matter. We’ve got a lot of story to cover in the lead-up to the finale, so let’s get right to it: Read on for the highlights of “Providence.”

ROGER MAKES A FRIEND | Roger is still walking down the Mohawk path of pain at the start of the episode, and when a blow lands particularly well, he goes down yelling. Eventually, one of the men stops the beating, but informs Roger that he is a captive in the camp. Later, we watch Roger get ordered around by a stern, female member of the tribe, but not everyone is so angry at him. Another, younger woman holding a baby approaches and asks if he speaks French. He enthusiastically says “Oui,” and she hands him a fistful of herbs to chew for the pain in his torn-up arm. A desperate Roger asks for help escaping the camp, but before anything can happen, the Mohawk man wearing the red coat approaches. We learn that his name is Kaheroton, her name is Joniehon, and that he is not a fan of Roger speaking with her — likely because Kaheroton seems kinda sweet on the young mother.

After the trio’s terse interaction, Roger is thrown into a darkened hut. He lands on his bad arm, then sits up and chews the herbs, probably mentally bemoaning his fate. He’s shocked to hear a soft voice say, “Bonjour” behind him. The tribe’s other prisoner is a Catholic priest named Father Alexandre Ferigault. “You’re the man they have christened ‘dogface,'” he tells Roger in English, adding that they’re in a village called Shadow Lake in New York. At that, Roger just about loses it, doing a mix of hysterical crying-laughing, because he walked far.

‘LOOK OUT FOR NUMBER 1’ | As the men talk, Father Alexandre’s story comes out. He arrived at the camp years ago with the intention of converting some of the Mohawk to Catholicism, and he was successful. He lived with the tribe for a while but then became very ill; he wound up falling in love with one of the tribeswomen who cared for him. “Then, after I recovered, there was sin,” he says quietly — which is perhaps the least sexy way consensual sex has ever been described on this show. Anyway, the woman got pregnant and the Mohawk were fine with the whole shebang… provided Alexandre baptize his child. And there’s the rub.

“I have broken faith with my God and my calling. I know that I am damned. I will not also damn this child with the false blessing of a fallen priest,” he tells Roger, who encourages him to just drip some water on the baby’s head and mutter something in Latin, because the Mohawk won’t be any wiser. But the man of God refuses. He’s later stripped naked and removed from the hut; when he returns, he’s saintlike… in that he’s missing his ear and, like George Weasley, is now holey.

Once the priest has recovered enough to speak, he tells Roger that he once more refused to baptize his child. If he doesn’t change his mind by morning, he adds, the Mohawk will set his feet on fire and keep burning him that way until he dies. Still, Alexandre is steadfast in his decision, saying that the death will be punishment for his sin.

Roger, on the other hand, thinks that is ridiculous, and says so. Loudly. And often. “You know how you can say you’re an idiot? Because I’ve been an idiot myself,” he begins, launching into the story of how he pursued Bree “through time and space” and wound up eschewing a trip through the stones — though he’s not very detailed about that part, obviously — in order to try to find her.

Roger understands Ferigault’s feelings, he adds, “but the difference is: I’ve learned something from my pain. I’ve changed… Look out for Number 1. From now on, that’s me.” Perhaps because the priest has not encountered many badasses in his life thus far, he buys into Roger’s idea that he is one. So the two work all night, digging a hole that can help them escape.

IDIOT HUT, PARTY OF 1 | In the morning, the hole still isn’t big enough, so Alexandre allows the Mohawk to take him and orders Roger to keep digging after he’s gone. And Rog does, wriggling out of his prison as the priest screams in the distance. He starts running away, talking to himself all the while, trying to convince himself not to go back. “For once in your stupid, idiotic life, be smart,” he mutters, then yells “Aw, f—king hell” as he turns and heads back to camp.

Indeed, Alexandre is lashed to a post, his feet in a fire, as the tribe watches. Joniehon, who clearly is the mother of the holy man’s child, cries. So Roger runs in and throws a barrel of spirits into the fire, creating a blaze that will put the priest out of his misery far faster than the Mohawk’s preferred method. Then everything REALLY goes to hell. Kaheroton tackles Roger as the men of the tribe rush to jump into the fight. An unnoticed Joniehon kisses her baby, puts it down, and then steps into the fire, embracing Alexandre’s burning corpse as the flames engulf her, as well.

Kaheroton watches, gape-mouthed, then picks up the baby and cradles it as he cries and the doomed parents die. And Roger, who WAS FREE for a hot minute, is marched back to the “idiot hut.” (Side note: Thank GOD there was no audio for that section.) (Another side note: In the book, this sequence of events happens while Jamie and Claire are in the camp. When I was re-reading the novel recently, I wondered how on Earth the show was going to convey everything that happens at the same time. Handling this matter on its own was probably a smarter move.) 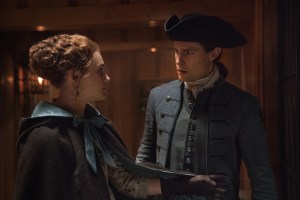 BREE MAKES A REQUEST | Back at River Run, Lord John brings Brianna news of Bonnet’s arrest. “He is condemned, and will hang next week,” he informs her. “I thought you would want to know.” Heck yeah she does — and she wants to go see him, too. Grey looks at her like that’s the worst idea in the world (because it kinda is), but she hands him Jamie’s letter by way of explanation. Jamie’s voiceover tells Bree that “you must find the grace to forgive” and that her rapist likely will die sooner rather than later, because he’s a giant eff-up with a violent streak, plus KARMA, but that she shouldn’t be the one to kill him because she’ll never be the same after. “Forgiveness won’t change what happened, but it can change what will be,” Brianna tells LJG. “Very well,” he says, resigned to helping her. Just then, the baby kicks, and Grey asks if he can feel it. He puts his hand on her belly and looks up, delighted. “My god, he’s real!” he says. “Yes, I know,” Bree answers.

Unbeknownst to both of them, in Wilmington, Marsali figures out that Fergus and some of the Regulators are hatching a plan to bust Murtagh out of the pokey. And she’s on board, going as far as to bring up how Claire risked her life to save Jamie when he was in Wentworth. “They’d find a way, and we will, too,” she says — because oh yeah, she wants in on the plan, as well. Fergus posits that maybe it’s time for them to relocate permanently to Fraser’s Ridge. “I’ll find us a wagon and start packing our belongings,” she says, not missing a beat. (Side note: When did Marsali become one of my favorite characters?!) 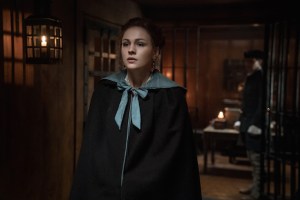 FREE MURTAGH! | Bree is nervous before going into the jail to see Bonnet. She’d be a lot more nervous if she knew her brother were laying down fat lines of gunpowder long the building’s perimeter, but I digress. Grey balks when Brianna wants to face her attacker alone, but she points out that he’s chained to the wall, so “he can’t hurt me.”

When she’s in front of Bonnet, Brianna tells him her name as well as who her parents are. “They saved your life, and you robbed them,” she adds. “Yes,” he says, unrepentant, goading her a bit. She’s a little unnerved but she shows him her belly and says what she’s there to say: “You are going to die. To hang by the neck until you’re dead. And if it if makes dying easier for you, to know there’s something of you left on this Earth, then you’re welcome to the knowledge.” He notes that he won’t be forgotten, and she sharply corrects him, saying, “My baby will never know your name, will never know you existed.”

Before she leaves, he digs into his mouth and pulls out something — a gemstone — “for his maintenance.” And then things go kerfluey before they go kablam.

Fergus and the Regulators show up, knocking out a guard and holding Grey captive. Grey recognizes Fergus and they have an awkward conversation that ends with Ferg telling his men not to hurt LJG but not to let him leave, because “his allegiance is to Governor Tryon.” Fergus frees Murtagh and runs into Brianna, but Fergus is like, “No time to waste! The gunpowder has been lit!” They all flee, leaving Bonnet to die in the explosion that will serve as a diversion while they get away. But at the last moment, the blonde prisoner gets a hold of the keys to his chains, which were dropped conveniently close to his cell in the chaos. Did he make it out? The episode leaves it up in the air. (Side note: This is the scene I referred to in this week’s Ask Ausiello as being simplified from the book’s version, and better for it.) (Another side note: If you’d like to dive into the “Is Bonnet worse than Black Jack?” conversation, check this out.) 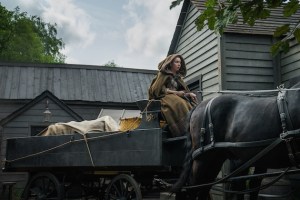 Fergus, Murtagh and the men dive under the cover of Marsali’s carriage, and she makes a verra fine wheelwoman indeed as she drives them out of town. A Redcoat stops Bree and Grey to ask if the Regulators gave any clue about where they were heading. And even though Grey knows full well the escapees are heading to Fraser’s Ridge, he outright lies to the soldier in order to help Murtagh. Aw, Lord John! What Bree says earlier in the episode is true: You are impossible not to like.