Sadly, this week’s episode of The Masked Singer‘s did not address the show’s biggest mystery: Why, exactly, is host Nick Cannon wearing those turbans?

Regardless, up on the ridiculously far away guessing panel, former Soup stirrer Joel McHale once again joined Ken Jeong, Jenny McCarthy, Robin Thicke and Nicole Scherzinger as they tried to figure out the warblers underneath the wardrobe. But were they successful? (Or even mildly near the mark?) Read on for a breakdown of the evening’s performances. 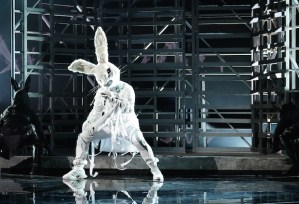 RABBIT | “Sometimes not getting to be yourself can leave you feeling boxed-in,” Rabbit said during his clue package, seemingly lending credence to the theory that he was an *NSync member — remember the “It’s Gonna Be Me” video? — and then he nailed Avicii and Aloe Blacc’s “Wake Me Up.” (Scherzinger also said as much during his performance.) (My guess: Still J.C. Chasez.)

ALIEN | In her intro video, Alien said she was going to “rise above” those who think she’s out of fashion, Scherzinger said, “Levitating!” And really, what more do you need to know. Oh, Alien’s song? A breathy, Janet Jackson-esque “Lovefool” by The Cardigans. (My guess: LaToya Jackson.)

RAVEN | Lady Gaga’s “Bad Romance” may not have been the best selection for the feathered chanteuse, given that the spoken part of the song basically allowed us to hear her voice and made me sure that underneath that big beak, it’s… (My guess: Ricki Lake.) 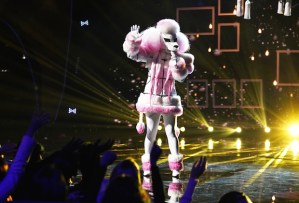 POODLE | Like Peacock last week, Poodle performed from way up high — on a swing suspended over the stage — as she sang “Time After Time” by Cyndi Lauper. The references to “justice” and “verdict” in her clue package, though, threw me. But when she added “I have been fired multiple times” on stage during the discussion, and McCarthy guessed comedian Kathy Griffin… yeah, I could see that. (My guess: Kathy Griffin.)

BEE | In her video, Bee said that she can’t see out of her mask, which made me very afraid for her the whole time she was Bruno Mars’ “Locked Out of Heaven.” Thank goodness she was fine — and she did a great job, in case you were wondering. McCarthy posited that it might be Gladys Knight, and that’s also… (My guess: Gladys Knight.)

THE UNMASKING | Poodle got this week’s unmasking… and she’s comedienne Margaret Cho (who played Jeong’s sister on Dr. Ken — oops!).