In The Masked Singer‘s third episode, Peacock added quite the feather to his cap.

Despite an admitted fear of heights, the incognito singer absolutely nailed his performance — part of which was performed on a very raised platform — and reinforced my belief that I know exactly who’s under that plume.

Episode 3 did away with the head-to-head battles; instead, the costumed crooners went one by one and were presided over by the show’s regular panel, plus guest Joel McHale (Community). 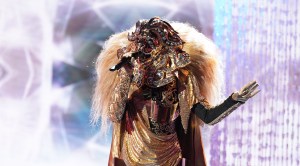 LION | Panelist Nicole Scherzinger noted that Lion — the evening’s first performer — didn’t sound like a trained singer, but her colleague Robin Thicke disagreed, saying her voice sounded “seasoned” and hypothesizing that she might be on the older side. Either way, she nailed Nina Simone’s “Feeling Good.” (My guess: Yeah, I still got nothing.) 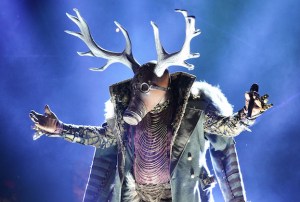 DEER | Deer’s clue package seemed to indicate that he was an athlete who’d done commercials, and he remarked that he was fairly good at throwing (maybe like a football quarterback?). He sang “Get Your Shine On” by Florida Georgia Line and did an adequate job. Though his additional clues involved track and field and horses, I’d be surprised if he weren’t an NFL personality. (My guess: Terry Bradshaw.)

PEACOCK | “I started out as a little teenybopper, but there’s more than meets the eye,” Peacock told us in his clue video, and before he even launched into OneRepublic’s “Counting Stars,” I had doubled down on my Episode 1 suspicions about his identity. His showstopper performance didn’t do anything to change my mind. But then my colleague Matt Mitovich messaged me to say that David Hasselhoff makes more sense, given Peacock’s mention of having drama roles during his career, and I became a little unsure. Eh, still — (My guess: Donny Osmond.) 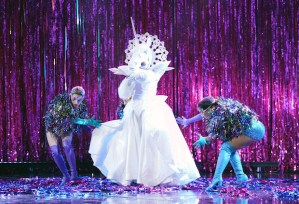 UNICORN | Her comment about how losing her “sheen” shook her confidence made me (and the panelists) start to think that perhaps she was an ex of Mr. Tiger Blood himself, Charlie Sheen. Whoever she is, she’s definitely not a strong vocalist — not that you could tell under all the auto-tune the show used as she sang Britney Spears’ “Oops!… I Did It Again.” (My guess: Denise Richards.)

MONSTER | The Furry One gave us serious One Tree Hill vibes as he sang Gavin DeGraw’s “I Don’t Wanna Be” and was amazing. Sounds strange to say that the one-eyed weirdo had the best performance of the night, but it’s true: As Thicke pointed out, he was the only contestant who went for some “mountaintop” notes during his jam. Dude can sing. (My guess: T-Pain.)