If you’re one of the unfortunate few who contracted an illness over the holiday break, let this serve as a public service announcement: The Masked Singer is not some fever dream you’re having. Fox’s new singing competition, which premiered Wednesday, truly is as strange as it seems. 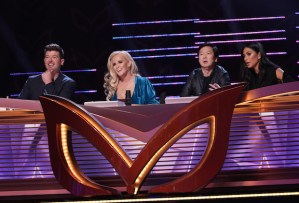 The new series’ set-up: Each week, six “celebrities” don elaborate costumes — including masks that cover their entire faces — and (with voices disguised) take part in introduction packages that offer a few clues about their identities. Then the contestants engage in three paired sing-offs, with the loser of each (determined by audience vote) sent to be part of the night’s Bottom 3. At the end of the hour-long episode, one of those unfortunate furries is voted off and then unmasked.

Host Nick Cannon emcees the affair, backed by a panel of well-known commenters: singer Robin Thicke, Community grad Ken Jeong, former Pussycat Dolls frontwoman Nicole Scherzinger and former View co-host Jenny McCarthy. The panelists comment on the singers’ performances and offer guesses regarding their identities. For instance, there’s Scherzinger’s observation about a man dressed as a giant peacock: “Could it be the figure skater Johnny Weir, because his outfit is so extra?” (Side note: It is not Weir.)

Speaking of that peacock, here’s a quick rundown of the night’s vocal battles and how they shook out: 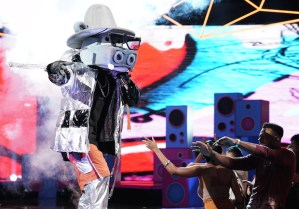 PEACOCK VS HIPPO | Clues about the big bird’s identity included that he started performing as a child and that “it’s probably been a while since your mom had a poster of me on her bedroom wall.” While singing “The Greatest Show” from The Greatest Showman, Peacock displayed both a rich, trained voice and an ease with choreography and playing to the crowd. (My guess: Donny Osmond.) Meanwhile, Hippo’s clues seemed to indicate that he was a professional athlete: “I’m used to performing in a mask” for screaming fans, he said, and “I conquer every arena that I enter.” He sang Bobby Brown’s “My Prerogative,” with a heavy assist from a vocal backing track, making it seem like he was not a professional vocalist. (My guess: An NFL player, but I have no idea which one.) Winner: Peacock!

MONSTER VS UNICORN | A monster is “what the world labeled me,” the male inside the fuzzy, blue suit said during his intro package, adding “I was at the top of the game, but the game turned on me” and noting that he’d taken a break from the public eye. During Queen’s “Don’t Stop Me Now,” the contestant showed off a soulful, polished voice (but those backup dancers’ costumes, aka full-coverage unitards with a giant eye where the face should be, were the stuff of nightmares). (My guess: Cee-Lo Green.) Unicorn, the night’s first female competitor, said she grew up in a rich neighborhood and had dreams of being a singer but was told she was tone-deaf at a young age. When she launched into “Fight Song” by Rachel Patten, that bore out: Her voice is very weak. Which is why it was so surprising when we found out the round’s Winner: Unicorn! 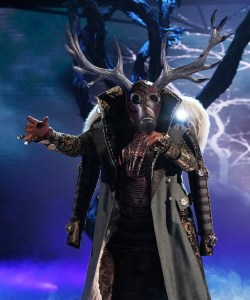 DEER VS LION | Deer’s costume looks like something out of Hannibal; the large male wearing it also seems like a professional athlete, especially when he cryptically says, “Ravens, beware” during his intro spiel. He performs Imagine Dragons’ “Thunder” and jumps around a bit, but his voice is not great. Lion, the night’s final contestant, noted that she’s a member of “Hollywood royalty” who’s “stepping away from my pride.” She sang “A Little Party Never Killed Nobody” by Fergie, and she was pretty great. “It’s someone hella legit,” Jeong observed. Winner: Lion!

THE UNMASKING | Of the Bottom Three, Hippo gets this week’s unmasking… and he’s NFL player Antonio Brown from the Pittsburgh Steelers.

What did you think of the premiere? Grade the first episode via the poll below, then hit the comments with your thoughts!