Warning: This post contains spoilers for Tuesday’s This Is Us.

When Jae-won wanted to go low, Randall decided to go high — and the morally upright decision paid off, big-time, in this week’s This Is Us. In an unexpected development, Candidate Pearson bested his rival for Philadelphia’s City Council seat, and did so without revealing that Solomon Brown had paid the cops to make a DUI charge go away years before. (Read full recap here.)

So, congrats, Randall! What’s next? 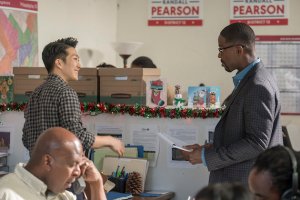 First off, says series star Sterling K. Brown, the Alpine, N.J. wing of the Pearson family is going to discuss whether a move to Philly is a good idea.

“That’s definitely something that’s worth considering,” he tells TVLine during a break in filming. “Then there’s just some general talk about what kind of strain his absence from the family causes on the family as a whole, and what kind of responsibilities or sharing of responsibilities they have to reallocate because of this new position.” He pauses, then adds with a chuckle: “That’s all I”m going to say about that!”

Even though Brown’s schedule is rather packed (aside from This Is Us, he’s got three movies coming out later this year) — and the NBC drama’s cast is notoriously careful with what they can and can’t say about the show — we somehow managed to eke out a few delicious teases from the Randall, the myth, the legend. Read on for our chat with Brown.

TVLINE | That fight in the bedroom between Beth and Randall felt like the most intense argument we’ve seen them have. Did it feel that way to you?
Ooh. Well I guess it’s between that and Vegas, when they both had a difference of opinion on how to deal with Deja at the strip club. But the one that airs tonight feels particularly… there’s nothing pithy at the end of it. It’s just, “You know what? You need to get out of my face, I need to get out of your face before somebody says something that they regret.” It’s tense. 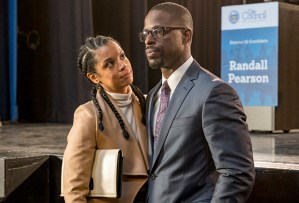 TVLINE | Do you think there’s any truth to what he says about Beth being jealous of his having purpose?
You know what? In every fight, the truth hurts. So even thought it was not the kindest moment of Randall’s, there’s always truth in everything that he says.

TVLINE | Will we see anything raised in that argument come out later in the season?
Yes, most definitely.

TVLINE | When did you find out that Randall would win the election?
I knew from the beginning of this season, because Dan [Fogelman, series creator] pitches us the whole season at once so that we know where we’re going. And we even know things going into future seasons — knock on wood, I don’t want to put the cart before the horse. But we have an outline of where we want to end the series. And I appreciate that, because different showrunners have different styles, but he allows us to be part of creating the arc of the characters throughout the season and throughout the show.

TVLINE | Phylicia Rashad is coming on as Beth’s mom. What’s her relationship like with Randall? Do they get along well?
That’s a good question. They get along, because Randall gets along with most everybody’s parents. They get along swimmingly. In the episode that we first meet Beth’s mom, the story focuses on the women. It focuses on Beth, her mother, on Zoe — that triumvirate throughout the years.

Unfortunately, I don’t have any scenes with her this first go-around. But my level of enthusiasm for having her be part of our world is, I can’t even put a cap on it. Because she’s one of our great thespians. I truly believe that she is a national treasure and everything she does is phenomenal. I was talking to Sue [Kelechi Watson] about her episode and what it was like to work with her. She was like, “Dude, she brought the pain. She made me feel like I was a Huxtable kid. Put me in my place real quick!” [Laughs]

She is a Howard [University] alum, and Sue is a Howard alum. So there’s this reverence for people who came before you from your institution who have gone on to do great things, and now you have the chance to share the screen with them. It was a big moment. It was a beautiful moment.

TVLINE | We learned today that Goran Visnjic will be joining the cast as a teacher who’s had an influence on Beth’s life. What can you tease about this man and what he means to her?
[Laughs] Beth has a passion that she has abandoned and she’s trying to make heads or tails of why she made the decision to abandon that passion. I think Goran’s character helps to illuminate how she fell in love and fell out of love with something in her life.