Madam Secretary‘s final act of 2018 was to put Secretary of State Elizabeth McCord in jail for speaking out against family separation policies at the United States border. (OK, technically it was for trespassing. You know what we mean.) But were MadSec’s charges, like auld acquaintance, forgot in the new year?

Short answer? Nope. At her arraignment, Elizabeth refused to plead guilty to a misdemeanor charge of trespassing — a deal Mike B. had worked hard to get her — and instead pled not guilty to the felony charge. Doing so meant that she’d “kiss POTUS goodbye” if found guilty, Mike reminded her, but Elizabeth didn’t feel she could operate any other way and still feel like she was acting according to her conscience.

Russell and Dalton were very worried about what the media circus would mean for the administration… until the crowd in the courtroom was overwhelmingly supportive of the Secretary of State and her actions. She gained even more fans when she refused the judge’s offer to be released on her own recognizance, with no bail, and said that she’d stay in prison until all of the detained children were reunited with their parents. “This is not who we are,” she said, earning a standing ovation as she was led away to await trial. Then, a guard at the facility shot footage of the deplorable conditions inside and spoke to the press, saying that if Elizabeth was willing to go to jail regarding the matter, “Then I can’t stay silent. I stand with Secretary McCord,” he said, which pleased Russell even more.

Still, Arizona Gov. Barker — aka the one who had Elizabeth arrested in the first place — refused to budge on his policies, even when Dalton offered him a seat at the table in figuring out border security issues moving forward. But Elizabeth had an idea that she needed Jay to execute: Re-approach Sen. Morejon about supporting the end of family separation. (Too bad Jay was sky-high on Winn’s marijuana-basket goodies when she called.) With Winn’s help, Jay pitched Morejon on improving border security via legalizing marijuana, which would widen his base and plump up his coffers in the long run. And all the senator had to do was sponsor a bill that put pressure on Barker to end his heinous and inhumane practice. Morejon agreed. 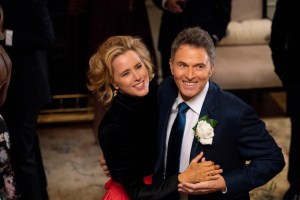 But it looked like Elizabeth wasn’t going to get out of Arizona in time for her and Henry’s 30th anniversary party/vow-renewal ceremony. So Henry brought the ceremony (as well as a dress etc. and the kids) to her. With a Catholic priest who’d also been arrested with Elizabeth presiding, she and Henry re-pledged themselves to each other. He read a gorgeous letter he’d written her the night before their marriage. She freestyled, including “Thank you for blinding me with your love and words for the last quarter-century.” And just before the end, Stevie got notice from Russell: Morejon’s bill had passed and Barker had finally backed down, meaning Elizabeth would be released and the children in detention — including, as we’d later see, Daniel and his mom from Part 1 — would be reunited with their parents. Mr. and Mrs. McCord kissed through the bars of her cell in triumph.

Back in D.C., the McCords held the party they’d planned. Elizabeth officially informed her staff that she was going to run for president and asked them to join her team. And thanks to Stevie’s wrangling, Peter Frampton — one of Elizabeth’s favorite singers — played “Baby, I Love Your Way” for the guests while Henry and Elizabeth danced in the living room.

Also of note: Kat visited her father, who has a green card and who does not approve of her life, and implored him to apply for citizenship. “Once you’re in the system, you’re more protected,” she said, crying a little. Though things were not great between them, he promised her he would apply.

Now it’s your turn. What did you think of how “Family Separation: Part 2” turned out? Hit the comments!