After Sunday’s Madam Secretary, it’s never been more clear that Elizabeth McCord is the kind of person who’d make a great United States president. She’s just got to get out of jail first.

Yep, the Secretary of State wound up under arrest at the end of the CBS drama’s fall finale, which also happened to be its 100th episode. The cause? Touring an Arizona detention center for children separated from their families during illegal border crossings — a visit expressly forbidden by the state’s ultra-conservative governor, who deemed Elizabeth’s presence “trespassing.” The facility’s mere existence horrified President Dalton’s entire team, but seeing it firsthand galvanized Elizabeth to speak out even more strongly than normal in favor of acting in favor of humanity, even when it might contradict the law.

“What I saw was an affront to decency and an assault on our country’s core values. Children separated from their parents, in cages. Crying. Terrified. Lacking basic care,” she told reporters outside the building, a final note of defiance that sealed her fate. “No deterrent is worth trading our humanity. No policy, no matter its goal, is worth lowering our moral standing in the world. Nothing can justify harming children. Now the governor wants me to shut up, but I won’t, because what he’s doing is immoral and un-American, and every American needs to know about it.”

By the end of the hour, Elizabeth was in handcuffs and her wedding vow-renewal ceremony — which she and Henry had been planning for some time — was in the lurch. Read on as executive producers Barbara Hall and Lori McCreary tell TVLine why the show’s milestone hour was the time to take on separation at the American border and why Elizabeth’s time behind bars might not be as brief as you’d think. 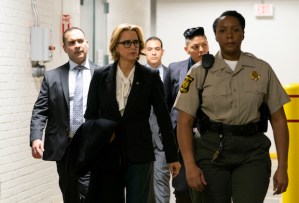 TVLINE | Correct me if I’m wrong, but it seems like perhaps the distance between real life and the world of Madam Secretary gets a little shorter in this episode than it normally is. Would you say that’s accurate?
BARBARA HALL | Yeah, it’s one of the things where it’s such a prominent part of our lives these days, this issue, and not having this in our world made Madam Secretary begin to feel a little out of step or almost like a period piece. We had to find a way to bring this issue into our world, so we could make our show remain current. That’s one reason we wanted to take it on.

TVLINE | The situation — children being taken from their parents and placed in these detention centers — is a brutal thing. Talk to me about how you decided to dramatize it the way you did.
HALL | We decided to dramatize it in a way that would give people more insight into the process. But the reality of this world — you know, we weren’t allowed really to see inside these detention camps, just sneak, sort of a peek inside —and so we wanted to do our research and figure out what it’s really like and then take people in there. In reality, senators and congressmen requested access to these detentions centers and were denied it, so we wanted to take that scenario and allow our Secretary of State in, treating it as a foreign policy problem.

TVLINE | Elizabeth is taken into custody after her speech outside the detention center. What can you tease about what her experience is like as we move on from that point?
HALL | You’re going to see her being taken to jail and having her take the process through the court. 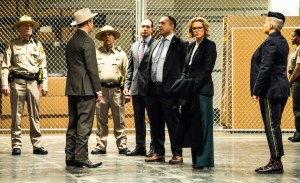 TVLINE | So this is not one of those things where in the beginning of the next episode someone steps in and makes a call, and she’s back in her office in the next five minutes?
HALL | No.
LORI MCCREARY | Well, as you can imagine, if that did happen, Elizabeth would not go for it. [Laughs]

TVLINE | Let’s talk about Sen. Morejon, whom Elizabeth thinks can be swayed on the family-separation issue. And it seems in the episode like he could be. Where is his head at as we move into Part 2?
HALL | We’ve always tried to paint him as a character who has very conservative politics for sure and a lot of self-interest, but he’s not entirely impervious to wanting to do the right thing. On some levels, he’s a true believer of his own ideology, so there are times when he could reach common ground with Elizabeth and people in the Dalton administration.
MCCREARY | That’s one of the things we tried to do with our characters: Even if they have drastically different, completely opposing views on what should happen in politics, they’re adults enough to sit down and figure out some way to make a win-win out of things.

TVLINE | This is by no means the most important aspect of the episode, but will we see the vow renewal?
HALL | It’s in real jeopardy, because of what’s going on with Elizabeth. So you really will have to tune in.
MCCREARY | And they want to do it at that particular time.
HALL | Yeah, there’s another clock on it. 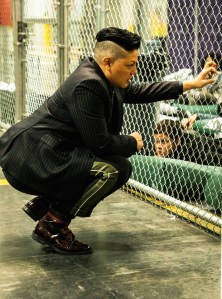 TVLINE | Daniel, the boy that we meet crossing the border with his mother at the start of Part 1: Will we see where his story goes in Part 2?
HALL | Yes, we’ll continue to follow him in Part 2.

TVLINE | There’s been so much reporting about how this type of separation, even if it doesn’t last for a long time, can affect these children for life. Will the show touch on that at all, the idea that even if there’s a happy ending, these kids are not necessarily going to be OK?
HALL | That will be inherent in the story. I hope that people will feel that as it’s dramatized.
MCCREARY | You’ll see part of that in Sara Ramirez’s character, Kat, because she has some parallel issues going with her own family.