If you thought Gia Gunn’s elimination would bring an end to the drama on RuPaul’s Drag Race All Stars, you’re even more delusional than she was. In fact, the absence of an overall Big Bad merely paved the way for several smaller feuds to sprout in the workroom on Friday.

This week’s maxi challenge split the remaining queens into three teams — Trinity Taylor and Valentina; Manila Luzon and Naomi Smalls; and Latrice Royale, Monet X Change and Monique Heart — and sent them to Jersey Justice, a courtroom TV show where “the shade is real, the tans are fake and the bailiff is shirtless.”

Puns abounded as the queens argued their various cases before the Honorable Judge Michelle Visage. But while some contestants rose to the occasion (Manila’s decision to bark like a damn dog was brilliant), others (*cough* Latrice) simply failed to entertain. 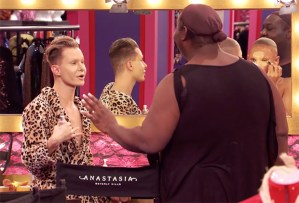 There was some post-challenge friction between Trinity and Latrice, the latter of whom was shocked — shocked, I tell you! — to hear that her performance was less than stellar. (“Bitch, I had jokes!”) Fortunately, Valentina swooped in with this awkward-yet-reassuring sentiment: “It wasn’t your best, Latrice. But at the end of the day, no one would send your ass home, bitch.” (Or would they?)

Valentina’s theory was put to the test when Latrice (unsurprisingly) landed beside Monet in the bottom two, with either Manila or Monique responsible for deciding their fates. Manila (again, unsurprisingly) made it clear that she would vote in Latrice’s favor, promising her, “I’m going to tear the roof off this place to save my friend.” Monique, on the other hand, found herself in a bit of a pickle. “I don’t know what to do,” she admitted. “Do I keep the person who’s been an inspiration to me, even though her report card is just Cs? Or do I give someone a second chance to redeem themselves for an off week who’s had at least one A+?”

As for the queens on the chopping block, neither thought they deserved to be there. “I’m the most respected, beloved queen in the game,” Latrice boasted. “That’s who deserves — and should be — in the competition.” (To that, I respond with Trinity’s truth bomb: “This competition isn’t about how many years you’ve been in the business.”) That said, I also don’t agree with Monet’s assertion that it would be “shady” if she was sent home. As far as I’m concerned, neither queens have been living up to their potential, and they both deserved the boot.

When Monique ultimately bested Manila in their lip sync battle, I honestly had no idea what was going to happen next. With Manila out (and sobbing), Latrice’s safety was far from guaranteed, but Monique was always on the fence about which of them to send home.

“This moment is beautiful and joyous because it’s my first lip sync, redeeming myself,” Monique said. “However, I love these two. This is horrible. The person I chose — they are sickening, they are stunning, they really do give you the ooh-ah-ah sensation. They just won’t be doing it here with us.” And that person is… Latrice. 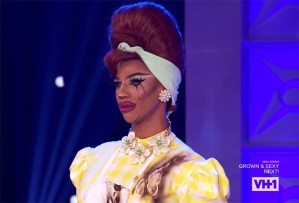 * I loved Naomi’s ’50s housewife runway look (“Cherry pie?!”), and I’m just really proud of her in general. She hasn’t “won” a challenge yet, but she’s been among the season’s most consistent queens, always earning high praise from the judges and maintaining friendly relationships with her fellow contestants. I don’t think she’s going to win it all — the crown is clearly Trinity’s to lose — but I see a potential Ms. Congeniality title in her future.

* I normally love Valentina’s self-centered antics, but when she redirected the group’s conversation to complain about the judges’ “non-constructive criticism” of her “beautiful outfit,” I had to roll my eyes. Like, that was embarrassing. Fortunately, Monique cut her off quickly, saying, “Sis, I love you, but you’re safe.”

* Speaking of Valentina, how do we feel about her telling Trinity that she would have eliminated her over Latrice? Was that really a “Villain-tina” move, or was she simply being respectful of her drag elders?

Your thoughts on this week’s elimination? Weigh in via our poll below, then drop a comment with your reasoning.