My reaction to this week’s episode of RuPaul’s Drag Race All Stars can be summed up with but two words: Ding. Dong. After three weeks of Gia Gunn terrorizing the workroom with her relentless negativity and senseless shade, Manila Luzon finally doused this season’s Big Bad, freeing the remaining seven queens to focus on what actually matters — the competition.

But first, let’s back up and see how we reached this glorious conclusion: Friday’s episode introduced Snatch Game of Love, a slightly more romantic version of the show’s most popular challenge, causing immediate friction between the “snatchelorettes.” It turned out that both Gia and Trinity Taylor wanted to play Caitlyn Jenner, and since Trinity already had her ensemble assembled, Gia was forced to think of a backup. (“Me being transgender and playing somebody else who is trans, I feel, is very appropriate,” Gia said. “But Trinity being an old white bitch with a lot of plastic surgery is maybe even more appropriate.” The shade!) 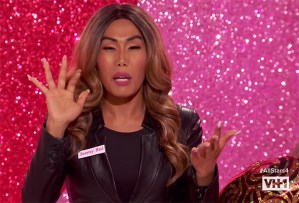 But rather than portraying a household name — of which there are easily tens of thousands of options — Gia chose to appear as, of all people, Cardi B’s nail artist Jenny Bui, a decision that would ultimately land her in the Bottom Two. Here’s a quick rundown of how each of the queens fared in Drag Race‘s first-ever Snatch Game of Love:

Monet X Change as Whitney Houston | This performance was nothing to write home about, which was odd considering how excited Monet was to do it.

Naomi Smalls as Wendy Williams | The impression was spot-on, but I wasn’t wowed by this one… until Naomi recreated Williams’ infamous on-air spill. The Statue of Liberty crown should have been a giveaway, but I still didn’t see it coming.

Trinity as Caitlyn Jenner | This was utter perfection. Not only did she fully embody the former Olympian, but she used her shtick to move things along when other contestants — in her case, Valentina — started to slow the game down.

Valentina as Eartha Kitt | Did she look like Kitt? Yes. Did she sound like her? Absolutely. But was there a single joke spoken the entire time? I’m honestly not sure, and neither were the judges. (That said, I did appreciate Valentina’s very specific impression of Kitt’s performance in The Emperor’s New Groove.)

Monique Heart as Tiffany Haddish | I wouldn’t say that Monique ever nailed Haddish’s voice, but she definitely mastered her mannerisms. (“She ready!”)

Manila Luzon as Barbra Streisand | The enormous prosthetic nose was a bold choice, but it absolutely paid off, resulting in a hysterical, Muppet-like portrayal of the iconic performer. It wasn’t the Streisand I was expecting, but it was the one I needed.

Gia Gunn as Jenny Bui | I know I dump on Gia a lot — and deservedly so — but this might have been the worst performance in Snatch Game history. I’m glad that Michelle Visage was familiar with Bui’s story and called Gia out for failing to capture her essence.

Latrice Royale as Della Reese | This one should have been a slam dunk, but even though she started off strong, Latrice’s performance ultimately suffered when she succumbed to Gia’s irritating interruptions. She confronted Gia about this in the workroom, accusing her of being distracting to make up for her own shortcomings, but Gia insisted that she “wasn’t trying to take anyone’s light.” Sure, Jan. 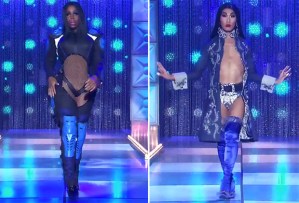 Next came this week’s boot-themed runway challenge, for which a surprising number of queens drew inspiration from Rihanna; Monet described her padded ensemble as “if Rihanna had a dirt bike,” and Gia simply said she was inspired by the singer’s “denim look.” (And, yes, I immediately Googled what that meant. Thank you Glamour for educating this uncultured swine of a recapper.)

But it was Manila, dressed as a “leather daddy Tom of Finland sex bunny,” and Trinity, whose getup aimed to replace Valentina as the show’s resident Linda Evangelista look-alike, who stood proudly as this week’s Top Two. Gia and Valentina, meanwhile, were relegated to the Bottom Two for their various disappointments.

“For me, there’s a clear person going home, and that’s Gia,” Trinity said when asked which queen she would cut. She wasn’t as easily swayed as Manila, who began to sympathize with Gia after she attempted to explain her recent behavior: “As a trans woman, I don’t like being looked at as a man who dresses up like a woman because that’s not who I am. I just want to be me.” Manila also tried to forge an alliance with Valentina, but was shot down without a second thought. (“I can’t trust this bitch!”)

Trinity and Manila faced off to Whitney Houston’s “How Will I Know,” and although I was pretty sure Trinity had this one in the bag, considering how hard the judges were laughing at her performance, the victory went to Manila. And she chose to eliminate Gia.

* I’ve always loved Trinity, but she’s really been stealing the show these past few weeks. From her quick confrontation with Monet to her more significant scuffle with Gia, she’s been a joy to watch and impossible not to root for.

* If you didn’t at least tear up while Latrice was talking about her fiancé, you don’t have a soul.

Were you surprised by this week’s elimination? Relieved? Whatever your reaction, cast your vote below and drop a comment with your thoughts.