Yes, Midnight, Texas faithful: Before you hit the comments or start blasting me on Twitter, the photo at the top of this post is not from this week’s episode and instead is from the show’s second-to-last episode ever. But a) Manfred’s noggin plays a significant role in the show’s final hurrah, and b) even though I’m bummed about the series’ cancellation, you didn’t think I’d let the opportunity to make a bad pun pass, did you?

The Season 2/series finale, “Yasss, Queen” opens right after Manny’s beheading. All of the supernatural essences that Kai and Patience collected go into Theophilus’ skull, which is then connected to Manfred’s head-free body. Once he’s a full man again, Patience kisses her brother/lover on the mouth. Ew.

And just like that, the town is renamed Patience, Texas, (!) which we see on a sign as Patience and Theophilus are carted around town in a carriage pulled by townsfolk. Basically, the witchy pair — aided by Fiji and a bunch of other dark witches — have taken over and made Midnight residents their slaves. Patience is pretty sure that Kai is dead, and she’s preparing for “Phase 2”: world domination. But first, they need to amass an army, so they start turning white witches into dark ones. 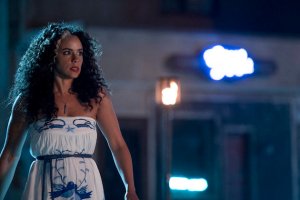 Olivia and Bobo are Patience’s chattel, but Joe is tied up and drugged by means of demon ash (oh, poor Chuy) that’s liquefied and pumped into his body via IV. Pretty soon, she’s turned him into a dark angel — complete with pitch-black wings and all-black eyes — who narcs on Olivia when she tries to break free from the cages where she, Bobo, Lem and the rest of the townspeople are kept. As Patience tortures Olivia in the apartment where the assassin and her vampire husband used to live, the show goes whole hog on the allegory at hand: Patience, spattered in Liv’s blood, cries that she just wants to “make Midnight great again!” (Heh.)

Unbeknownst to Patience & Co., Walker has been keeping tabs on the town. “It’s real bad,” he says as he returns home one night. Who’s he talking to? OH, IT’S MANFRED. The psychic medium did not lose his head during that effed-up anti-church service, and a flashback explains how. It was Kai who drank the vial back on that day in his office, and then did a spell that made him into Manfred’s doppelganger. He figured that, worst-case scenario, his body wouldn’t be able to handle all of the Big Demon Energy that Patience was preparing to pour into Manfred, and even though it would kill him, it also would stop Theophilus’ resurgence. (Oops.)

The new plan? Free Delilah from the painting, see what happens. And even though the new endeavor is unlikely to work, Manfred and Walker head back to town to give it their best.

Meanwhile, Kai’s body is starting to deteriorate, so Patience summons Lem to give Theo some of his magically restorative blood. He does, but that’s before he learns that Patience plans to burn Olivia at the stake that night. As the couple is given a few moments to say goodbye, Olivia tells her man that it’s not worth fighting anymore, because they’ve lost. And over at the detention center, Basil, the trickster demigod is back. Bobo wants Basil to take his soul in order to get Fiji’s back, but the pizza-delivery guy says that’s not how it works: He’d have to steal a stranger’s soul. Bobo is conflicted; Basil gives him the means to order the switch and leaves it up to him. 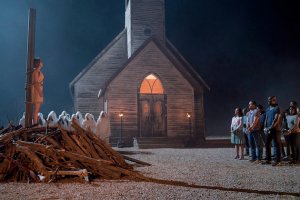 When it’s time to burn Olivia alive, it turns out that Manfred and Walker have infiltrated the proceedings and are able to contain most of the witches, thwarting Patience’s plan. But Fiji doesn’t hesitate to light the pyre under her former friend, and it looks like Liv is literal toast… until we see that WHAT OLIVIA IS A VAMPIRE NOW WHAT WHAT. (Back during that moment in her cell, the hopelessness was a ploy to fool the guards. Suckers!) Lem steps in to leach Fiji, then they all run to the Cartoon Saloon with Walker and Addie, the Delilahs’ IT woman, in the hopes of freeing Delilah from her painting. But Addie can’t do the spell alone, so Bobo grimly calls Basil and orders him to nab a soul and return Fiji’s.

The scene freezes as the soul-butterfly Bobo called for flies into Fiji’s open mouth, returning her to her former self. Yay! Bobo is overcome with happiness but makes Basil promise that the soul is from “someone we’ve never met.” The trickster says that’s exactly right. Of course this will go badly, and soon, but let’s all be happy for a minute or two, cool?

After Fiji and Bobo kiss, she’s ashamed. But Manfred tells her to let it go for now (“You tried saving Bobo, and you turned into a huge d—k,” he reasons, like, hey, it happens!) because they’ve got bigger problems. And then Evil Joe shows up, interrupts the spell and brings Manfred and the painting to Patience. But apparently the spell worked well enough so that Delilah is able to escape her canvas prison just as Patience is about to chop off Manfred’s head. In the melee that follows: Joe kills Addie, Manfred rips Theophilus’ decaying head from his body, and all of the demon essence leaks into the hotel’s lobby pool. So Patience jumps in and starts soaking it all up, turning herself into an uberdemon.

Then Kai’s ghost enters Manfred’s body, puts his hand on his wife’s chest and sucks out all of the demon energy, blowing it into the fireplace and destroying it. Then Delilah casts Patience and Theophilus’ head into the painting “for all eternity.” Manfred thanks Kai’s ghost, who tells him, “Be at peace, brother,” before disappearing.

When the gang all gathers at Home Cookin’, which Bobo now owns and where Patience’s painting now hangs, Manfred marvels at how the town apparently has moved on. (Fiji then confesses that she performed an amnesia spell on almost everyone.) Walker arrives and is welcomed at the Midnighters’ table, but even his love for Joe — which he confessed while trying to restrain the dark angel — isn’t enough to keep Strong in town: Since Joe killed someone, he tells Manfred, he has to redeem himself in the eyes of God. So he puts Manny in the role of town protector while he’s gone.

Elsewhere, Fiji comes to bed with a big surprise for Bobo: She’s pregnant! “This is the most magical thing that’s ever happened,” she says, and they tearfully celebrate. “We’ve never met him or her yet, but I am already in love,” she says, striking fear in Bobo’s heart as he flashes back to the exact wording of his deal with Basil.

Finally, Xylda appears to Manfred to tell him that he’s “really in trouble now.” And the final shot of the series is someone dressed in a suit of armor, dragging a sword through town at night the way Demonfred did in the Season 2 premiere.

Now it’s your turn. Grade the finale via the poll below, then hit the comments to let us know what you thought of the series-ender!