Sunday’s Outlander was a milestone in more ways than one: In addition to marking the Starz drama’s 50th episode, the hour also contained Brianna and Roger’s wedding (of sorts) and first time making love.

Oh yeah, and then they essentially broke up. Talk about handfast, am I right?

“It’s a mistrust thing,” Sophie Skelton says when she and co-star Richard Rankin visit TVLine’s offices. “He doesn’t say, ‘I knew.’ As soon as they see each other, he doesn’t say, ‘I’m really sorry, I knew. I’m sorry to tell you, but this is why.'” 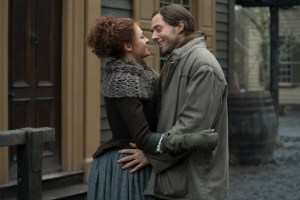 She’s referring, of course, to the fact that Roger had stumbled across the same historical death notice for Bree’s parents Jamie and Claire that Bree had, but he hadn’t mentioned it — a fact that Rog accidentally let slip during a post-coital conversation.

“It’s that Brianna/Roger thing of not explaining what they’re thinking,” Skelton continues. “So it’s misinterpreted.”

Rankin adds that the couple’s fight, which takes place not long after they’ve essentially married each other via a convention known as “handfasting,” is “must more charged” than their row at the Highland festival in this season’s third episode.

“They’re also much more vulnerable at [this] point,” he adds. “They’ve really put themselves out there. They’ve just made love for the first time. They’ve just been handfasted. It’s not long after all these really major, climactic points of the relationship have happened, and instantly, they’re in this huge argument. So it’s going to carry the whole weight of that.”

The fact that neither is expecting a brawl, Skelton reasons, makes it hurt more.

“They’ve been through a lot to get there, and they suddenly feel so safe. They’re with each other, and the rest of it doesn’t matter for a moment,” she says. “It becomes a way bigger argument than it might’ve been had they not just been in such a state of love and safety and loss and everything.”