A Million Little Things‘ Gary might not have been able to stop one of his best friends from choosing to end his life, but he’s damned if he’ll let another heartbreaking tragedy unfold on his watch.

And that’s why we’ll see him on a two-pronged mission when the series returns in its new timeslot on Thursday, Jan. 17 (9/8c), show boss DJ Nash tells TVLine. Part 1 of Gary’s self-assigned charge: Figure out the real reason Jon committed suicide. Part 2: Put everything he has into helping Maggie fight her illness.

“Maggie and Gary have two very strong things in common. One, they both have cancer, and two, they both tried to save someone they loved — but couldn’t,” Nash says. “For Gary, if he can save Maggie, maybe that will make up for the fact that he couldn’t save Jon.” 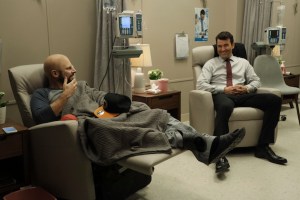 Gary’s complicated feelings surrounding his pal’s death came to light in Episode 9, when he broke down in tears after going on an angry rant at his remission-anniversary party. Nash says those emotions will fuel Gary’s actions in the back half of the season. “It’s actually something I said to James [Roday, who plays Gary] on set yesterday: When Jon helped him through chemo, [Gary] didn’t say ‘Thank you,'” the EP says. “In his mind, it’s like when your buddy picks up the tab. He’s like, ‘I’ll get the next round.’ That’s what the thank you would have been.”

Not only was Gary unable to repay his friend’s kindness, “Jon was struggling,” Nash adds. “And we will see in these next episodes coming up the pain, guilt and hurt that Gary feels because he didn’t even know.” He also previews that Gary will drive the “desperate search to answer the question of ‘Who is Barbara?'” — aka the mystery woman listed on Jon’s life-insurance policy.

The winter premiere will find Jon’s family and friends preparing to run a 5k race to raise awareness for suicide prevention. And when Maggie insists on running even though she’s undergoing chemotherapy… well, you can guess how her man — with whom she reunited in Episode 10 — might react to that.