Question: Got any Riverdale scoop? What’s next for Archie? —Kerri
Ausiello: When we last saw Archie in the fall finale, he was dyeing his famous red locks and making a run for the Canadian border. Executive producer Roberto Aguirre-Sacasa won’t tell us who he finds when he gets there, but “he is headed into the Canadian wilderness, for sure.” He won’t be seeing his dad Fred in the flesh anytime soon, though: It wasn’t shown on-screen, but the EP confirms that Fred did make it back into Riverdale before the quarantine came down. 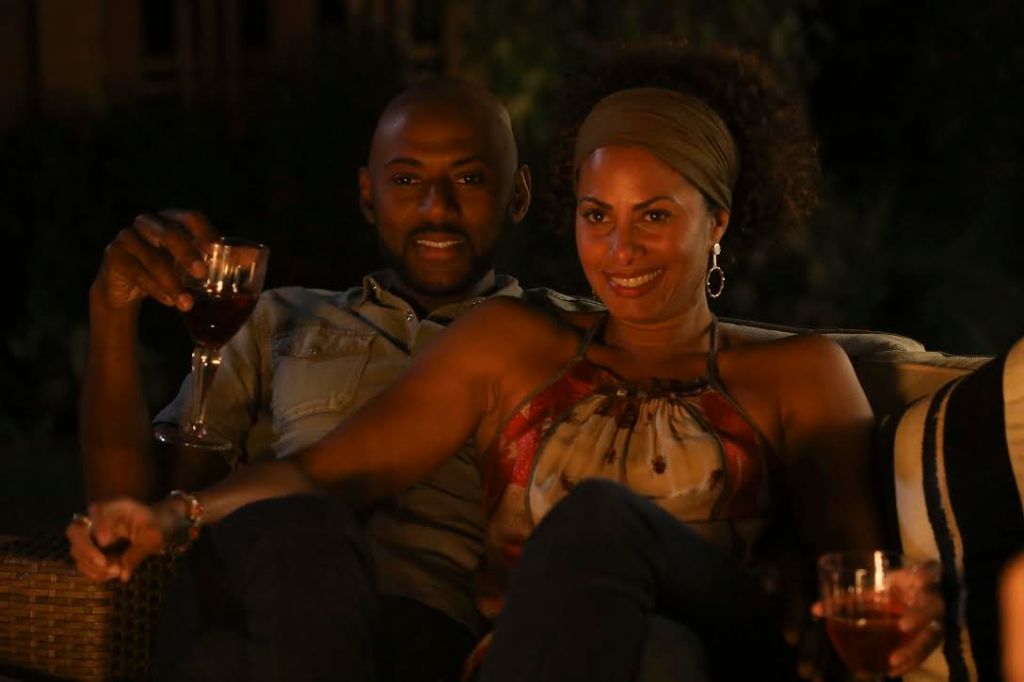 Question: Any Million Little Things scoop? My friends and I are obsessed with it and hope it’s back for another season. —Montreal4
Ausiello: Remember how showrunner DJ Nash said that everyone in the group of friends has a secret they’ve kept? Look for Regina’s to come to light in Episode 14.

Question: Any scoop on what to expect when Grey’s Anatomy returns? —Al
Ausiello: I will have a special holiday treat for you this coming Monday, so sit tight. In the meantime, I tried to get showrunner Krista Vernoff to share even the tiniest bit of intel about Jennifer Grey’s mysterious character and… I struck out. “I can’t [say anything],” she responded. “Because it would really ruin a twist and turn that I don’t want to ruin.” Hmm… I’m sticking with my initial prediction: She’s Jo’s mom.

Question: Anything on The Good Place? (Janet, specifically.) —Whitney
Ausiello: Everyone’s favorite not-a-robot will be forever changed by having the humans materialize in Janet form, creator Michael Schur teases: “The way to really have empathy for people is to walk a mile in their shoes, and she did, like, the inverse of that. A bunch of people walked in her weird body for a decent amount of time… so that is another contributing factor to her evolution.” He adds that the season finale “has some pretty wonderful ‘compare this version of Janet to the one you saw in the pilot’ kinds of scenes.” So enjoy, Janet fans!

Question: I’m glad Dorian finally confronted Kaleb about his feeding problem on this week’s Legacies. Can I stop worrying about MG now? —Susan
Ausiello: I don’t think it’s ever safe to stop worrying about MG, but as far as Kaleb goes, it sounds like Dorian’s pep talk was just the beginning. “Kaleb has a lot of really big ideas, and a lot of opinions about how things should work,” series creator Julie Plec says. “Much like in the real world when a hot-headed teenager thinks he can second guess what makes the rules the rules, he’s going to have a rude awakening pretty soon where he realizes he doesn’t know as much as he thinks he knows.” 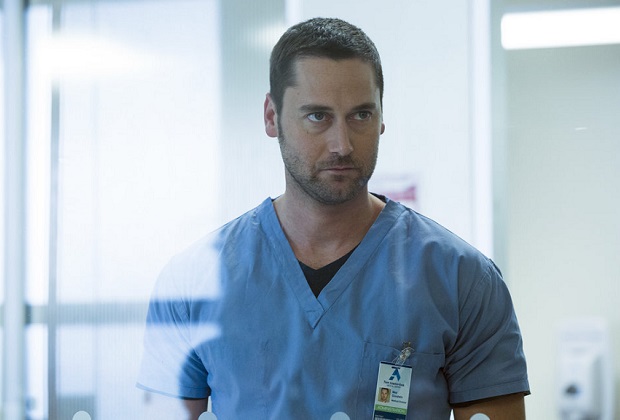 Question: The ending of New Amsterdam‘s fall finale makes me think that Max’s cancer is progressing quicker than first assessed. Will this affect the clinical trial Dr. Sharpe has gotten him into? —Malasha
Ausiello: We brought your query to showrunner David Schulner, and he said: “While we can’t reveal here what happened to Max on that dock, we will in our first episode back January 8. But, you’re right to ask if this will affect Max’s clinical trial. It most definitely will. This setback will change a lot of things in Max’s life. And Dr. Sharpe’s too. Thanks for watching and caring and writing to TVLine about the show.”

Question: Will The Flash give us any more hints about what Nora seems to be hiding? —SSH
Ausiello: Now that we know there is some sort of alliance with Eobard Thawne, you should expect “a flash-forward flashback episode” that explains “how all that came to be, which will be a lot of fun,” says showrunner Todd Helbing. “You’ll slowly start to get the pieces of info that you need, but there will probably be one episode where we explain how that all happened to get her to come back [in time].”

Question: Challenge: Make me look forward to the Schitt’s Creek holiday episode more than I am already. — Belinda
Ausiello: TVLine’s resident Schitthead Charlie Mason promises me that, no matter how great your expectations are, you won’t be disappointed — the special totally “sleighs.” What’s more, he issues a warning that the episode reveals a potential stumbling block to Alexis and Ted’s rekindled romance that neither she nor we anticipated. 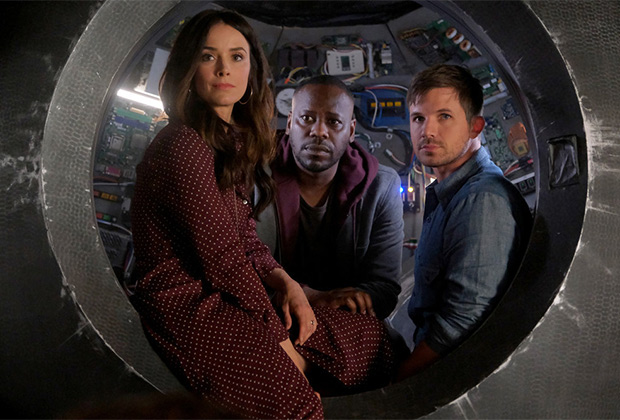 Question: I need to know two things about Timeless: First, will #lyatt have a baby? Two, is Jessica really pregnant with Wyatt’s baby? —Miwako
Ausiello: In response to your second question, star Matt Lanter says, “We address that [in the series finale, airing Dec. 20]. We’ll find out.” As for Wyatt, he’s not suspicious of Jessica and her baby news. “We’ve seen Wyatt be blinded by love throughout the last two seasons, though, and this is nothing new for him,” Lanter says. “Inherently, he’s a good person with a good heart, and I think he has a hard time accepting that people he loves or cares about … wouldn’t be good. So I think it’s easier as an audience member to look at Jessica and go, ‘Yeah, she’s lying.’ But I think Wyatt is just more blind to things.”

Question: How many time periods will we see in the Timeless finale? —Amanda
Ausiello: “There are two-plus time periods, I will say that, that we have not visited before,” showrunner Arika Lisanne Mittman shares, adding that the historical time trips highlight “ethnic representations that we have not seen before [on the show]. Both of these stories are things that [are about] lesser known historical figures. You get to meet some new people that you’ve probably never heard of.”

Question: I’d love a Resident scoop on Conrad/Nic. —Holly
Ausiello: I hope you enjoyed the couple’s honeymoon phase while it lasted, because the back half of Season 2 will be “nothing but obstacles” for the pair, according to executive producer Todd Harthan. “In just about every episode, there’s a new one for them to overcome… and they just start stacking up,” Harthan says, adding that the couple will be especially preoccupied with the health of Conrad’s father and Nic’s sister. “It’s going to be a ‘hold on and hope that they make it’ kind of ride,” he teases.

Question: Any hints on how to solve the Blindspot episode title puzzle for Season 4? —Hannah
Ausiello: “Oh man! We finally built a title puzzle this season that is legit very hard to crack,” showrunner Martin Gero answers. “I will say this: The puzzle is an homage to some our favorite TV series and how they title the shows. Figure out which, and you might be a step closer.” 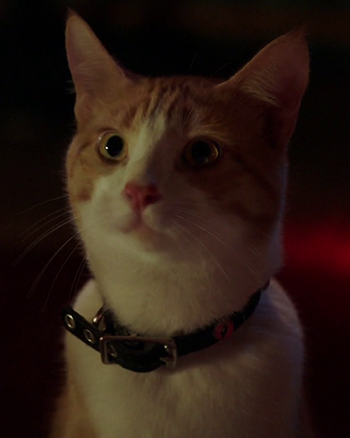 Question: Creek’s death on Midnight, Texas was so awful. Please promise me no one dies in tonight’s episode! —Rina
Ausiello: I cannot make that promise. But I can tell you that Mr. Snuggly makes it through OK. So that’s something… right?

Question: Got any red-hot Chicago Fire scoopage, Aus? —Gene
Ausiello: I see what you did there and I’m… very amused. Well done. The NBC drama is planning some girls-only bonding time for Sylvie, Stella and Emily. “They’re going to go on a road trip to [Sylvie] Brett’s hometown,” showrunner Derek Haas previews. The episode will air the week of Valentine’s Day, “so we’re calling it the Galentine’s trip.” Before that, though, the show will explore Emily’s “attitudes towards dating, which are different than Brett’s, and I don’t mean LGBTQ,” Haas explains. “I mean more of what [Emily, who is bisexual] considers casual versus what Brett considers casual. All of those dynamics are going to be deepened.”

Question: March is far away. I want American Gods scoop now! —Rob
Ausiello: Well, because you asked so nicely… Pablo Schrieber says the “antagonist and ally” relationship between Mad Sweeney and Laura Moon will be tested big time by his allegiance to Mr. Wednesday when the Starz drama returns for Season 2. The leprechaun’s destiny “is tied to [Wednesday], no matter what, but it’s also very thoroughly tied to her,” the actor says. “So Sweeney is walking the line, balancing what he owes Wednesday and what he’s realizing he feels in other places.” Hmm. Sounds a lot like we’ll see Laura kissing the Blarney Stone before the season’s over, am I right?

Question: Can you give us any Outlander spoilers? (Especially involving Brianna’s and Jamie’s meeting!?!) This is my first time doing this — hope I’m doing it correctly! —Carolina
Ausiello: You did OK. I’ll send you some notes about how to refine your approach in a separate email. Regarding the question at hand, I turn it over to our resident sassenach, Kim Roots, who has seen the scene in question: “I have rather high standards for the huge moments on this show — the wedding night, the print shop reunion, etc. — and I was incredibly satisfied by how the father-daughter plays out in [episode number redacted according to Starz’s spoiler restrictions]. Fans of the book definitely won’t be disappointed.”

Question: Elizabeth and Henry on Madam Secretary are #couplegoals. Please tell me anything you can. —Mary
Ausiello: An upcoming episode opens with the McCords taking a tango lesson. And one of them is significantly more skilled than the other.

This AAnd That…
♦ THE BLACKLIST: As teased in the Season 6 trailer, Red will spend some time behind bars after being double-crossed by a close confidant — but don’t count him out just yet. “He’s really been stripped of his superpowers,” series creator Jon Bokenkamp shares. “He’s disconnected from his resources, he may have friends who will fall away and he’s sort of on his heels, which is new for us.” But Bokenkamp assures fans that “if anyone could embrace the solitude of a cell and the experience of incarceration with open arms, it would be Raymond Reddington. We have really high stakes, but we also have some of the most fun we’ve had, as well.” 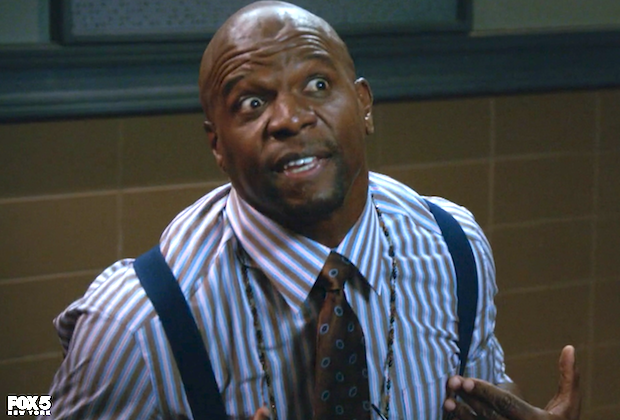 ♦ BROOKLYN NINE-NINE: There will be one major.hilarious change when the sitcom makes the leap from Fox to NBC in January. “We’re allowed to bleep and blur [now],” series co-creator Dan Goor recently told us. “Fox had a no bleeping and no pixelation policy.” Now the gloves are off. “Some filthy, filthy things have been said,” added Terry Crews. “I had one [joke] where I’m ashamed. I’m actually very, very ashamed. It was so jarring that everyone was like, ‘Whoa,’ and we needed to regroup… But holy cow, we never heard language like that on the show.”
♦ CHICAGO PD: Burgess is not the only one who will have a reaction to Upton and Ruzek’s romance. In an upcoming episode, Jay “responds in a way I think you’d expect Halstead to respond,” showrunner Rick Eid teases, “and I think what’s going on in his head is a little different than what he says.” Eid also adds that Jay’s “relationship [with] Upton is interesting and evolving, so don’t sleep on that.”
♦ HOUSEKEEPING NOTE: This is the last AA of ’18 so happy holidays and all that jazz!