The residents of Greendale are in for a festive fright when Chilling Adventures of Sabrina‘s holiday special drops on Friday, as several characters are visited by a ghost from their past — while others make big decisions about their own uncertain futures.

“It’s action-packed and it’s fun,” star Kiernan Shipka says of the episode. “But at the same time, there’s a lot of heart. A lot of the relationships develop in it really beautifully. I think it really fuses the witch world and the mortal world in a really lovely way. It’s truly a very special episode. I really love it.”

During a recent visit to the show’s Vancouver set, Shipka’s co-stars revealed what their characters have planned for the holidays: 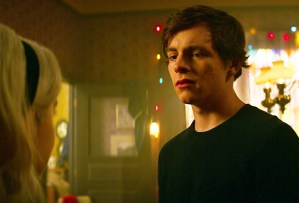 HARVEY | Given that Harvey is no longer dating the show’s titular witch, Ross Lynch says his character is “not in it that much,” adding that things are still tense between the exes. “Harvey and Sabrina’s relationship just isn’t … the same, so they’re not spending as much time together.” (Click here to read more about Harvey’s blue Christmas.)

HILDA | As Sabrina’s self-proclaimed “warm and fuzzy” aunt, Hilda finds herself at odds with Zelda, who’s no fan of the holiday spirit. Speaking of spirits, “You also learn a lot about Sabrina’s mom” in this episode, Lucy Davis teases. “Sabrina’s mom comes back and interacts with her, then with Zelda and Hilda. It’s a nice little arc.”

ZELDA | As you may recall, Sabrina‘s first season ended with Zelda engaging in some light kidnapping, bringing Father Blackwood’s newborn daughter to live at the Spellman Mortuary. Zelda’s story in the holiday special is “very much about the baby, and having a baby in the house, and her attachment to the baby,” Miranda Otto says, adding that a “certain witch comes to town” and stirs up even more trouble. “[The Spellmans] have to keep the yule log burning so to protect themselves from spirits that could come into the house, and Zelda is particularly worried because of the baby in the house. And indeed someone does come to try to steal the baby.”

FATHER BLACKWOOD | Speaking of the endangered baby, her father will apparently spend the holidays across the pond. “He’s taken Judas to England to meet his extended family,” Richard Coyle says of Father Blackwood. “He’s spending time with Judas.”

THE WEIRD SISTERS | While their classmates return home for the holiday, the orphaned Weird Sisters remain at the Academy of Unseen Arts, where Sabrina approaches them about helping her perform a seance to contact her mother. “I think it’s our version of trying to have a family experience, or at least allow someone to get to see their mother again on their special day,” Adeline Rudolph says.

SUSIE | Lachlan Watson might be the most excited cast member of all. “I get to run around in a little elf costume the whole time, which I am very happy about,” Watson says, adding that even if you watch it “just to see me in my little fuzzy hat run around [that would be good].”

What are your hopes for Sabrina‘s holiday special? Hit PLAY on the trailer below, then drop a comment.