Heads up, witches! This recap spoils the many Chilling plot twists of Sabrina‘s first season finale. Proceed with caution.

As far as season enders go, Chilling Adventures of Sabrina‘s first attempt had it all: a cataclysmic showdown, a tearjerking death, a heartbreaking split and a final shot that left us dying to find out what happens next. All I can say is, thank the Dark Lord that Netflix already ordered a second season of this bewitching masterpiece. 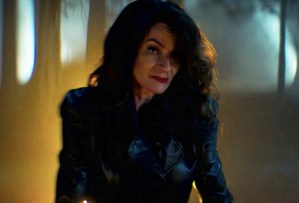 The finale began with Sabrina confessing her supernatural sins to Roz and Susie — that she’s a witch, that she resurrected Tommy, all of it — which Ms. Wardwell expected to end in disaster, thus severing Sabrina’s final ties to the human world. Much to her mustache-twirling chagrin, however, Sabrina’s honesty merely strengthened her friendships, forcing Ms. Wardwell to pivot to Plan B.

As a final effort to woo Sabrina to the Path of Night, she summoned the Greendale Thirteen, a baker’s dozen of witches with grudges against the humans of Greendale (for hanging them back in the day) and the witches of Greendale (for letting the atrocity occur). And these old bats weren’t messing around; their plan was to summon the Red Angel of Death, who would claim the lives of every firstborn family member in town.

Lord Blackwell arranged for the coven members to seek refuge within the Academy of the Unseen Arts, but since he couldn’t be bothered to worry about Greendale’s mortal population, it was up to the Spellmans to save the day. They conjured a tornado (no big!) to lure the town’s humans — most of whom were unaware of the far more serious supernatural threat — into the bunker below Baxter High.

That’s when Ms. Wardwell’s plan finally came to fruition: To save the town, Sabrina needed to increase her power… by signing her name in the Book of the Beast. She was expectedly hesitant — we all remember what happened the last time she was asked to sign — but she eventually accepted her mentor’s proposal, before vanquishing the spirits of the Thirteen with hellfire. 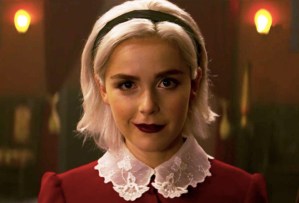 Even though peace has been restored to Greendale, it’ll take some time to sift through all the emotional wreckage left over from the Witching Hour. In the meantime, Sabrina appears to be acclimating to her newfound superpowers pretty nicely; with a new look, a new attitude and a new outlook on the screwed up world around her, we may be looking at a whole new Sabrina Spellman in Season 2.

GLORY TO THE NEWBORN KING | As if the potential downfall of both the magical and mortal worlds wasn’t enough, Lady Blackwell also gave birth to her twins during the climax of the finale, drawing Zelda away from her family to play midwife with Prudence. And to say things didn’t exactly go according to plan would be a grave understatement. Not only did Lord Blackwell’s wife die during childbirth, but one of the twins turned out to be — gasp! — a girl. Fearing for the infant’s life, Zelda did something uncharacteristically rebellious, faking the baby’s death and sneaking her back to the mortuary to raise as a Spellman. Her brother Judas, meanwhile, is already being hailed. Literally. So I think he’ll be just fine.

HARVEY’S HEARTBREAK | Sabrina’s relationship with Harvey, which was already hanging on by a thread after everything that happened with Tommy, received an official termination in the finale. “I love you too much to risk anything happening to you,” she told him, a claim she already proved earlier in the hour when she asked Nick to keep Harvey safe from the Thirteen. (Speaking of which, how much did you enjoy Nick and Harvey’s scenes together? Can they just date?)

WARDWELL, WELL, WELL… | The finale also “revealed” Ms. Wardwell to be Madam Satan (aka Adam’s first wife Lilith, aka the future queen of hell, etc.), which probably didn’t surprise you as much as it surprised Principal Hawthorne, to whom this entire finale was presented like some sort of fairy tale. Frankly, I’m more concerned about what happens when she begins to Sabrina as a true threat; we all saw how easily she took care of her familiar.

Your thoughts on this Chilling finale? Hopes for Sabrina‘s second season? Grade the episode (and season) below, then drop a comment with your full review.