This post contains a major spoiler for this week’s Midnight, Texas. Proceed with caution.

One of the original Midnighters falls prey to an unknown evil in this week’s Midnight, Texas, and we’re not talking about the kind of thing you can reverse with a spell or a bunch of sage.

Creek dies, murdered by someone whose name she can’t quite convey to a horrified Manfred before her spirit is consumed in flames and wiped away forever.

But we’re getting ahead of ourselves. At the start of the episode, Creek returns to town after getting a voicemail from ex-boyfriend Manfred, saying he needs her. Only thing is: Though it’s definitely his voice on her phone, Manfred never actually left the message. And Creek just happens to walk in on her ex and Patience making out in his living room, which causes much awkwardness all around.

Turns out, there’s a trickster — aka a demigod who loves to mess with people, just because — active in the community, and he likes nothing more than to watch the Midnighters implode. More on that in a moment.

Meanwhile, Manfred is sure that Kai is stockpiling all the powers he takes from supernatural beings, but to what end? In order to find out, he and most of the rest of the gang investigate the spa. Creek is tasked with keeping Patience distracted during the operation, but that doesn’t work out so well, and Kai’s worried wife leaves Creek in a treatment room while she attends to something else. When everyone rendezvouses at the end of the night, Creek is missing, and Olivia theorizes that the former waitress just jumped in her car and left like she did at the beginning of the season.

So Manfred, who earlier had shared a kiss with Creek that indicated things certainly weren’t over between the two of them, calls Creek and leaves a voicemail asking her to let him know when she’s home safe. Also? “I love you,” he adds. Just then, he hears Creek’s voice calling him outside, and he relaxes, realizing that she didn’t leave after all.

But when the psychic opens his front door, he sees the ghost of a dead Creek, who apologizes and tells him that she loves him, too. “Who did this to you!” he cries. She starts to tell him, but flames break out around her throat and spread quickly, engulfing her otherworldly form in seconds. When they dissipate, she’s gone… apparently for good. (Sniff.) 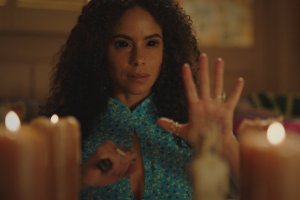 * Looks like Fiji can’t keep her promise to Bobo that the black magic wouldn’t change her: After officially pledging herself to the dark arts, she’s got a white streak in her hair and an extreme inability to care about anything except herself.

* After learning that Walker hunts demons because one killed his mother long ago, Joe and the cowboy have sex in Walker’s van. Joe immediately is overcome with guilt. Later, when Joe stops Walker from going after Chu, Walker learns that Chuy is Joe’s husband, and Chuy uses his context clues to figure out that Joe and Walker have been doing more than hunting. He can’t contain his demon side, and he nearly kills Walker (and half the town) before running off into the night.

* Lem is a vampire again. Olivia is on board with it.

What did you think of the episode? Were you surprised by Creek’s passing? Sound off in the comments!