Ahead of The Voice’s Season 15 Semifinals, not one but two singers were shown the stage door Tuesday. Going into the Results Show, at least based on TVLine’s Monday-night poll, Kirk Jay looked safer than safe (despite a lotta criticism in the comments), as did Kennedy Holmes (whose performance was probably the show’s most fun since Chris Blue did “Rhythm Nation”). Considering that Reagan Strange seems to dominate the streaming whether her live singing is anywhere near tolerable, she was probably, inexplicably safe, too. (Or so I thought pre-show… ) 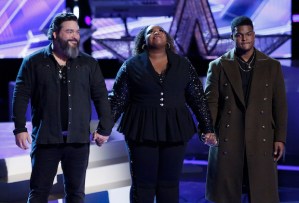 To my surprise, Sarah Grace didn’t look like she’d be singing for the Instant Save. Though I loved her haunting cover of the Blind Boys of Alabama’s “House of the Rising Sun” rendition of “Amazing Grace,” a lot of your comments — combined with her history of not connecting with a young, streamy audience — made me fear her number was up. But as of Tuesday morning, she was polling well (third place) and selling well on iTunes (first among the contestants — not that downloads count anymore except possibly as a barometer of popularity).

So, who actually had to sing for the Save? Before we found out, James Arthur and Anne-Marie, who it turned out was not Anne Murray, teamed up on their Greatest Showman: Reimagined number, “Rewrite the Stars” (which would’ve only gotten a C+ from me if they’d been competing, it was so limp); Kelly Clarkson showed the contestants what a talent-show winner sounds like with a performance of her new single, “Heat” (although was it just me, or was she going hoarse by the end? Get that coach a lozenge!); and Gwen Stefani and Mon Laferte teamed up on a rendition of “Feliz Navidad” that seemed like it wanted to be quirkier than it was (and probably would’ve benefited from some double-spiked eggnog). 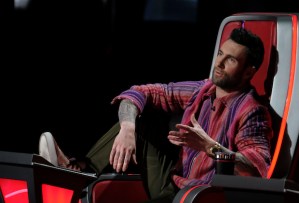 Reagan Strange (Team Adam) | To my astonishment, viewers finally heard what I’d been hearing for weeks — that Reagan’s pitch was more often a mess than not — and let her fall to the Bottom Three. But since she was ill — and only appeared backstage during the Results Show — she didn’t perform. However, Carson announced that, although she couldn’t sing for the Save, the audience could still vote for her. So, uh, what was the point of putting DeAndre Nico and Dave Fenley through those do-or-die performances? I guess maybe they could’ve swayed viewers with a wow of a performance.

Dave Fenley (Team Blake), “Amazed” — Grade: C | Aw, gee. You know I’m a Dave fan. Maybe I just think he seems like a friendly teddy bear. But here, he sounded pretty grizzly — pitchy, especially at first, and just not “on.” Perhaps he was thrown by being in the Bottom Three. Regardless, his coach insisted that Dave’s voice floored him every time he set foot on stage. This didn’t seem like an instance where Dave was gonna have floored anyone. What’s not quite as far down as floored? Couched? This might’ve couched a few viewers. Not awful, but not a tide-turner, either.

DeAndre Nico (Team Adam), “All of Me” — Grade: C+ | As DeAndre began singing, I thought he might have a real shot at getting the Save. If the teenyboppers had abandoned Reagan, and since Dave hadn’t done his best, it seemed like there might be an opening. Unfortunately, DeAndre sounded under-rehearsed — like this could’ve been a song that he slayed, he just wasn’t altogether there yet. Making matters worse, Adam spent the time that he could’ve been encouraging viewers to vote for DeAndre… to discuss his special relationship with Reagan. Worst. Coach. Ever. DeAndre was robbed — by his own coach. Not. Cool.

Could you believe that Adam basically encouraged viewers to support Reagan over DeAndre? Would you have eliminated Reagan instead of DeAndre or Dave? Vote in the poll below, then hit the comments.