With The Voice’s Season 15 Semifinals only a week away, we’ve all got a pretty good idea of which singers we expect to make it to the Final Four, right? My picks haven’t changed since I made ’em except for Sarah Grace. She remains a favorite of mine, but her unfortunate struggles to connect with viewers have made me think that DeAndre Nico or Chevel Shepherd would’ve been a smarter selection. Yes, DeAndre had to sing for the Save last week, but man, did he ever sing! And speaking of Saves, the contestants did their damnedest Monday not to need one during Tuesday’s double elimination. Some of them rose to the challenge with apparent ease; others… uh. Read on, and we’ll discuss. 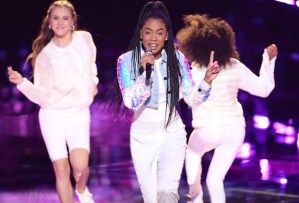 Kennedy Holmes (Team Jennifer), “Me Too” — Grade: A | At last, JHud gave Season 15’s youngest contestant a peppy, upbeat number instead of a ballad. Not that Kennedy hadn’t been slaying her ballads, but it was time to let the kid be a kid and have some fun. And holy moly, she nailed it. She nailed the hell out of it! She not only sounded almost iTunes-perfect throughout her Meghan Trainor cover, but she pulled off choreography that I couldn’t imagine any other contestant this season attempting. She’s just in such a different league from her competitors, I can’t fathom how she could possibly not win the title. As her coach said, she never disappoints. On the contrary, she dazzles.

Reagan Strange (Team Adam), “Cry” — Grade: D+ | Jeez, Faith Hill’s hit was gonna require Reagan to swing for the fences for, like, most of the song. Given her history of pitch problems, I feared that this wasn’t going to be pretty. In rehearsal, even her coach seemed to have a little concern, which was unusual — Adam tends to be more of a cheerleader than a critic. On stage, aw, man. I was hoping against hope that Reagan could pull it off. And she did seem to be feeling the performance. But this was just not great. Loud, yes, but great? No. I’ve watched baseball games where the guy on the mound wasn’t as pitchy as poor Reagan. Adam really should’ve stepped in and counseled her toward a different direction, key (which Reagan herself had raised), the works.

Sarah Grace (Team Kelly), “Amazing Grace” — Grade: A | Putting behind her the misfire of her Fan Week Florence + the Machine cover, Sarah bravely tackled the “House of the Rising Sun” version of “Amazing Grace” — and played trumpet. But there was no need for nail-biting, this was Sarah back in her element. She took her lower register low enough that it had to have scraped hell’s ceiling and attacked her bigger, more showoffy notes with the roaring confidence of someone who could tell that she was killing it. All of which only breaks my heart more, knowing that viewers aren’t generally responding to her the way that I am. Sarah’s not a pop star, she’s an artist with a capital A. 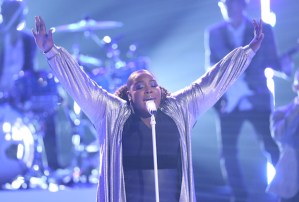 Kymberli Joye (Team Kelly), “Oceans (Where My Feet May Fail)” — Grade: B+ | After scoring big with “Break Every Chain,” the wannabe gospel singer made herself at home in her comfort zone by going with another spiritual number, this one by Hillsong UNITED. Though she said during rehearsal that she’d only ever sung it before in her car, it meant a lot to her since it had helped her overcome depression. On stage, Kymberli gave a performance that almost seemed designed to answer those who’d thought her Tasha Cobbs had been too over the top. She started off restrained — so much so that I wondered whether maybe the key was a little lower than she could easily reach. But then I realized that it was just a shrewd tactic, to let the song build and her vocal grow with it. By the time she was through, the skies had parted, and she was belting with a power that could’ve knocked down the pearly gates.

Chris Kroeze (Team Blake), “Callin’ Baton Rouge” — Grade: C+ | Chris’ Garth Brooks cover should’ve made me wanna do a shot of moonshine right out of the gate. But it wasn’t until about halfway through that he really got into it, it seemed like. How could a guy with a voice as big as his get swallowed up by the band? I know we sometimes grouse about the mix on the show, but if we could hear everybody else OK Monday — and I had, hadn’t you? — how did Chris let himself get run over like that? It wasn’t a bad performance by any means, but it also wasn’t his best. It lacked oomph. Blake was excited afterwards, marveling that Chris had “brought country music to America on primetime television.” But I would’ve been more excited if Chris had done so with a more vibrant performance. 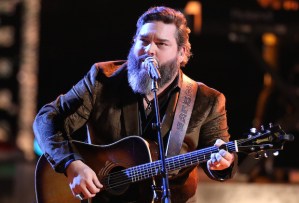 Dave Fenley (Team Blake), “When You Say Nothing at All” — Grade: B | Shaking off the mess that was Fan Week, Dave returned to country with a cover of a Keith Whitley hit that meant a lot to him and his dad. And right from the get-go, he was on solid ground vocally. Oddly, while the ballad was less energetic than the Garth Brooks smash that Chris had done, it was still more exciting. I wouldn’t have objected if Dave had opened his eyes more often during his performance, but throughout, he just seemed more present than Chris had. And I’d feel bad comparing them so directly except that they are both country artists on Team Blake — and as Dave noted, they’re likely to split the vote (not only between each other but between themselves, teammate Kirk Jay and Chevel Shepherd, too). Based on these back-to-back performances, I’d give Dave the edge. 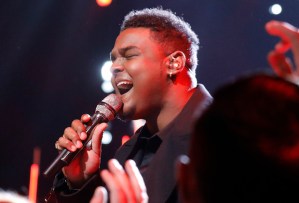 DeAndre Nico (Team Adam), “That’s What I Like” — Grade: C | In rehearsal, Adam assigned DeAndre a Bruno Mars song that had never before been done on the show — because no one before DeAndre could possibly have sung it, his coach said. After apologizing to God for having to say ass in a song, DeAndre hit the stage with a winning smile and a determination to bring to life the “Michael Jackson swagger” that Adam wanted to see. He didn’t at all pull that off, but vocally, he sounded OK. You could tell that he has a strong voice, and he knew what to do with it. But the song itself just wasn’t the showcase for DeAndre that Adam seemed convinced that it was. I fear he’ll be singing for a Save again on Tuesday.

Chevel Shepherd (Team Kelly), “You’re Lookin’ at Country” — Grade: B | In rehearsal, Chevel — aka Kelly’s “country Tinkerbell” — expressed her wish to put out an old-school country album, yodeling and all. And based on this performance, I think a lot of us would buy it. Chevel still struggled a bit — not a lot, just a bit — with her lower register. But she looked less than she sometimes has like she was shaking in her cowgirl boots — a definite two-step in the right direction; her voice had a lovely lilt on the high notes; and though her yodeling left room for improvement, it wasn’t at all unpleasant. Kelly was so pleased with Chevel’s performance that she likened it to the first time she heard LeAnn Rimes sing “Blue.”

Kirk Jay (Team Blake), “Tomorrow” — Grade: A+ | Probably for the best that Kirk went back to ballads after he revealed during Fan Week — mind you, in the most endearing of all possible ways — that he did not have the moves that he thought he did. His Chris Young cover allowed him to do what he does best, which is fill a song all the way up to overflowing with emotion, and stretch notes like he was pulling taffy. Or, as he put it, make people cry. The intimacy with which he kicked off the number was, no exaggeration, stunning. Like, I couldn’t even take notes during it, he made me stop everything I was doing and just watch, agog, at the sight of a man pouring out his broken heart from behind the keys of a piano. If anybody stands a chance of beating Kennedy, it’s Kirk. Between the emotion he’s able to channel, the fluidity of his phrasing and just the sheer beauty of his voice… he’s something else!

MaKenzie Thomas (Team Jennifer), “Because You Loved Me” — Grade: B+ | In rehearsal, MaKenzie revealed to Jennifer that Celine Dion’s hit was the first secular song she’d ever sung outside of church. In turn, JHud coached MaKenzie to be sure and incorporate her gospel influences into her performance. Once she took her place in the spotlight, she started off singing with admirable control, then built to the biggest glory notes we’d heard her pull off yet. For some reason, though, I still felt like, “That was really good,” not, “That was amazing.” Maybe it was because, unlike when Kirk sings, when MaKenzie sings, I — I’ll admit possibly wrongly — don’t get the sense that she’s really in the song. She’s singing it — sometimes beautifully — but not feeling it. And unlike in Sarah’s performance Monday, MaKenzie hit a clunker or two. Still, this was probably my favorite MaKenzie performance to date. I think, like with Chris, I just want to sense that she’s more present.

So, based on Monday’s performances, who do you think is a lock for the Semi-Finals? Vote for the standout below, then hit the comments.