Now that The Voice has whittled down its Top 13 all the way past the traditional Top 12 to the Top 11, it’s time to stop looking back at the contestants that we wish were still in the competition — for me, Michael Lee and SandyRedd — and start looking forward, to the vocalists that are likeliest to make the Final Four. Based a bit on Tuesday’s results show, a bit on TVLine’s Monday-night poll and a bit on wholly unscientific instinct, my picks are…

Sarah Grace (Team Kelly Clarkson) | Though this Texas teen is a natural at singing the blues, the fact that she’s (almost) never hit a false note suggests that, metaphorically speaking, she isn’t going to have any reason to.

Kennedy Holmes (Team Jennifer Hudson) | Season 15’s youngest contestant may also be its most promising. Besides being blessed with insanely powerful pipes, she radiates star power with an intensity that’s almost blinding. 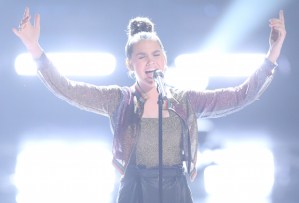 Reagan Strange (Team Adam Levine) | This Memphis teenager lacks the pitch-perfectness of Season 13 runner-up Addison Agen but shares her vulnerable presence and gift for reaching hearts by way of the ears.

Kirk Jay (Team Blake Shelton) | Not only is this 22-year-old able to pack a vocal with an entire relationship’s worth of emotion, but the wannabe country star has a coach who’s less likely than some (er, Adam) to saddle him with a dud song.