“You’re not getting me in trouble.”

It’s the day after This Is Us‘ fall finale, an episode that ended with a return to a flash-forward seen earlier in Season 3: An aging Randall and adult Tess prepare to visit a woman referred to only as “her.” But this go-around was the first time we saw Susan Kelechi Watson‘s Beth in the advanced timeline. (Also: We now know that “her” is Rebecca.) 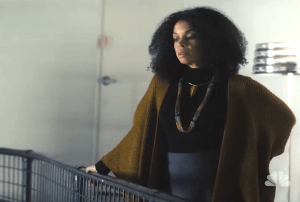 So when Watson chats with TVLine, she gently but firmly (see above) shuts down any speculation about Future Beth… aside from laughing and saying, “You’re welcome” when we note the Debbie Allen-in-Fame vibes she gave off during the scene.

Good thing Beth’s near future is just as compelling as what’s way down the road. (You didn’t think that sleep-on-the-couch fight with Randall was going to resolve itself, did you?) Plus: Since the beginning of the season, the show’s producers have been touting a Season 3 episode all about Beth’s backstory; that hour is about to go into production.

Read on for Watson’s thoughts on Beth’s big hour, whether the drama over Randall’s campaign is a blip or a harbinger for the relationship, and how likely we are to see her character fake-smoking again in the coming months. 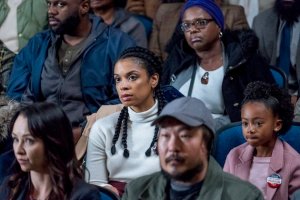 TVLINE | Earlier this year, Sterling K. Brown told us that Randall and Beth would have a bit of a “break” this season. Is this it? Might their relationship have even tougher ground ahead?
Well, it’s a rocky road ahead. It’s going to be a bit more of a turbulent time in their marriage, but all of that is part of the reality of it. We all felt pretty strongly, if you’re going to show a marriage even when it’s going really well, you really have to show the cracks, and the hills and the valleys. You have to be transparent about those things, and I’m willing to go there. There’s a lot that has been building up, I feel, over the past few seasons in their marriage. And this season, especially, things come to a head. So we can expect to see more rocky times ahead for them, yeah.

TVLINE | Do you and Sterling prepare any differently for scenes where Beth and Randall aren’t getting along than you do for scenes where they are? Or is it all just another day of work?
No. But it doesn’t feel like just another day of work. It all feels really special, and we try to take good care of all of the storylines. No matter where we are in it, we really want to make sure that we’re telling the story and really giving our characters a strong perspective. Like for example, [when Randall said he wouldn’t stop the campaign even though Beth asked him], you get these two very different perspectives, both which are very valid depending on who you’re speaking to. Our biggest goal is to really fight for our characters. I fight for Beth’s perspective, he fights for Randall’s, and then we come back to this marriage place: How do we try to compromise? Is there a compromise? Last night there was no compromise, there was just the couch. [Laughs]

TVLINE | Do you think that has happened before in their marriage at any point — one of them kicking the other to the couch — or do you think this is a first for them?
That’s a very good question. I have to say no. There’s a first time for everything, you know. Maybe there’s, in my imagination, a night where you’re upset and you choose to fall asleep watching TV on the couch, but I would think that there is something about the first time that something happens — and on our show, there’s something about the audience being there that first time — that makes it so interesting.

TVLINE | Things are so stressful for her right now, I picture her fake-smoking all over the place.
[Laughs] Yeah, there’s a lot of invisible, very full ashtrays around the house. You know what? I’ve gotten requests for another invisible smoking moment, and I said I’d try to work it in somehow. So we’ll see what happens.

TVLINE | Have you shot Beth’s backstory episode yet?
No, we’re about to.

TVLINE | What number episode is it in the season?
It’s 13.

TVLINE | What was it like, reading through that for the first time? How much had you hashed out with producers/writers ahead of time?
We had conversations with them telling the direction we were going in, what Beth was like in the past and what’s going to happen for her in the future, that type of thing. We have a really great new writer Eboni Freeman, [who is] the main writer on it, and some of it is her story, very personal to her. They found a way to create this really beautiful backstory, and a beginning of a resolution of Beth starting to get back on her footing again. And then we have some amazing surprises in it. It’s going to be a really powerful episode.