A Million Little Things‘ Gary is a jackass in ways both understandable (yelling at Maggie because he’s afraid of her death) and highly problematic (sleeping with someone convenient because he’s afraid of Maggie’s death) in this week’s episode, giving Eddie a run for his money as the group’s maker of the absolute worst decision possible in most situations.

But hey, there’s still a restaurant to open and a menu to lock down, so why wouldn’t the friends all get together in one room, drink lots of wine and hope for the best? Read on for the highlights of “Fight or Flight.”

FLY THE UNFRIENDLY SKIES | As the hour opens, Maggie is flying in a two-person plane with a guy we haven’t met before. They have a lovely time until a storm pops up, and the guy — who’s in the pilot’s seat— is having trouble controlling the aircraft. (It also probably doesn’t help that he’s swigging from a bottle of Jack Daniels as the plane loses altitude.” “Chad, I can’t help you if you won’t let me,” Maggie cries. “How can I help you if you don’t even know which way is up?” She screams for him to pull up, mentioning that she’s got to get to the movies (which is our most blatant clue that perhaps the scenario isn’t real), but they tip into a sharp nosedive nonetheless. A moment later, Maggie wakes up in her Boston apartment: The entire thing was a nightmare.

GARY ON A TEAR | Elsewhere, Eddie is showing Gary an apartment that he wants to rent. But Gary is too busy trolling dating apps to pay much attention to what his friend is saying. “I’m back on the market,” he notes, “and the ladies love to shop.” Eddie chides him to call Maggie instead, but Gary doesn’t want to talk about it, so Ed assumes that Gary messed things up with the shrink. “You’re always so fast to assume that it’s my fault,” Gary says, after a few borderline nasty comments about Eddie’s sobriety and current couch-surfing. “Well guess what, you don’t know!”

Gary then heads to Maggie’s apartment, where she hears him say “I can’t not care” through the door when she pretends not to be home, and her workplace, where her colleague informs him that she quit. So he does the next logical step: He hops a plane to Chicago, stalks her ex and demands that he come back to Beantown to talk some sense into Maggie.

Tom (aka the guy who brought Mags the grape soda a few episodes back) is relieved to hear Maggie isn’t dead, but he’s not willing to trek east for another intervention. He does mention, though, that Maggie’s trouble letting people in has to do with some guy named Chad, who “did a number on her.” 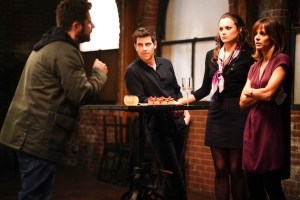 MAGGIE’S SECRET IS OUT | Back in Boston, Maggie’s insistence that she can’t see Rome as an unofficial patient anymore causes Regina to show up at her apartment, demanding to know why. “You give me one good reason you can’t keep seeing my husband,” Gina says. “Because I’m dying,” Maggie says as she starts to cry.

Gina shares the news with Rome and Delilah, who join her in ambushing Maggie at her place. She assumes that they’re there to try to convince her to get chemotherapy, but she’s overwhelmed when all they want to do is drink wine, eat bread and cheese and hang out. Maggie starts to sob, startling the others. This wasn’t supposed to happen, she explains, “I didn’t think that a guy I hooked up with in a church bathroom would lead me to friends who would support me in living the rest of my life in the way that I wanna live it.”

She adds that she’s been pushing them all away because she wants to save them the pain of her eventual passing. She also makes a vague reference to not being able to save someone in her past, and knowing how much that hurts. Gina tells her that she can choose to forego treatment, but she can’t choose to evict them from her life.

That night, when Maggie has the nightmare, suddenly Rome is in it, too… grabbing her hand and helping her try to right the plane when it goes into the dive. “We are in this together,” Dream Rome tells her before she wakes up. 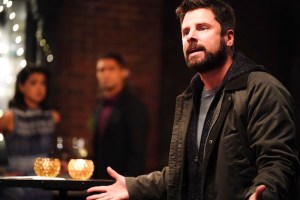 GUESS WHO’S COMING TO DINNER? | The next night, Rome appears at Maggie’s apartment to chauffeur her to an intimate tasting/trial run Regina has planned at the restaurant for her friends. But Maggie is too busy putting things in boxes: She’s pre-packing all her stuff, she explains when pressed, so her parents don’t have to sort through her belongings after she dies. Rather than trying to stop or distract her, he joins in — and makes a point of telling her that even though she wasn’t able to save the person in her past, she saved him.

So Mags changes her mind, gets all dolled up and joins everyone at the tasting party. Eddie is there (and he’s been filled in about her cancer, too), as is Katherine and her work honey Hunter. Wow, Regina’s food must be really good if it can get Katherine to be in the same room as her adulterous husband AND the woman he was sleeping with.

Then Gary shows up, but he doesn’t want to engage with Maggie. “I’m not gonna care more about your life than you do,” he says. He does accept Eddie’s apology for assuming the breakup was his fault, and he tells Ed he can crash on his couch for as long as he likes.

Everything goes relatively smoothly until Gary learns that almost everyone else in the friend group now knows about Maggie’s illness — and her choice — and they’re OK with it. “You’re really going to stand by and watch this woman kill herself?” he yells. “Shame on all of you!” 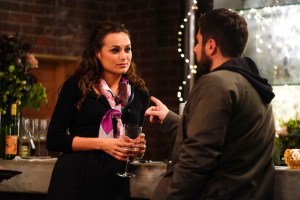 Maggie doesn’t return his anger until he brings up “some loser named Chad,” then she yells back that he has no idea what he’s talking about. He then spits that she’s right… because he doesn’t know her at all. He stalks out, followed by Ashley, who asks if he wants to grab a drink. “No, I’m already sweating and screaming at people,” he replies (ha), but he changes his mind when he learns it’s her birthday.

By the end of their episode, they’re stumbling into her apartment and kissing like they’re getting paid by the smooch. At one point, Gary seems to pull back and reconsider, but then he dives right back in. We don’t actually see them hit the sheets, but that’s probably what happened, no?

WHO WAS CHAD? | Meanwhile, Rome drives Maggie home. On the way, she tells him the full story: Chad was her brother, he was a 19-year-old alcoholic who used booze to self-medicate for his depression, and he wrapped his car around a tree while drunk driving on an evening she was out with friends at the movies.

“Since then, I’ve pretty much spent my life trying to keep people from hitting the tree,” she says tearfully, explaining that he needed her and she wasn’t there. “Is that why you won’t save yourself?” Rome asks gently. She seems to consider that for a while, then smiles. “See you Friday at 1?” she asks as she gets out of the car.

Back at the restaurant, Katherine admits to Hunter that she used him to make Eddie jealous — he doesn’t seem to mind — and then gives him a little kiss before he leaves. Then Katherine sits down for dessert with Gina, who inadvertently tells her that Delilah is pregnant but quickly adds “with Jon’s baby.” “Wow,” Katherine says, “and I thought my life was complicated.”

Meanwhile, at her place, Maggie falters, then faints, landing on the floor alongside the shards of the water glass she was holding. She has the nightmare again, but this time, Chad tells her that she could never have saved him. Then he puts on a parachute and says, “This is where I leave you,” and opens the door of the plane.