Need to catch up? Check out the previous A Million Little Things recap.

A silly game of one-upmanship turns life-or-death serious in this week’s A Million Little Things, when Gary — as we all knew he would — can’t let Maggie’s chemo refusal go unchallenged. But then Rome winds up in the hospital, and it’s a whole thing. On the upside, Eddie and Delilah hear their baby’s heartbeat for the first time, and they get a whole minute or so of happiness before the tears and hushed, painful conversations resume.

Read on for the highlights of “I Dare You.”

THE CHALLENGE BEGINS | Maggie and Gary wake up at his place, and we get a few minutes’ worth of banter before he reminds her that she’s living on borrowed time, thanks to her decision not to undergo chemotherapy. This manifests as his daring her to call a talk-radio psychologist she hates and tell her off.

So she does. She calls Dr. Stacy with a fake problem related to her boyfriend’s dog, and proceeds to call out the woman as a charlatan. But the radio doc has a hot (and correct!) take on Maggie’s man: “You’re afraid to fully give yourself to this relationship!” Maggie continues her tirade but gets cut off; though the exchange wasn’t as satisfying as she’d hoped, the dare-a-thon is on! Maggie challenges Gary to man a lemonade stand and choose a new ringtone to use instead of his jarring alarm clock. 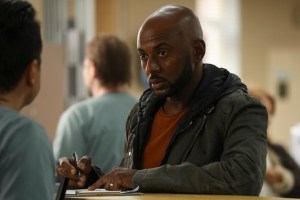 ROME, GROANING | Rome wakes up with a stomachache, and an already on-edge Regina worries. She decides to stay home and watch him, meaning she can’t accompany Delilah to her first ultrasound as planned. Rome’s pain is so bad that he nearly passes out in the bathroom; he’s on the phone with Maggie at the time, which confuses Gina. But she heeds the shrink’s advice to take Rome to Boston General Hospital, where she meets them.

During the triage interview and exam, Gina blurts out that her husband tried to kill himself recently. Given that Rome is hesitant to answer the nurse’s questions and the recent suicide attempt, the doctors want to give him activated charcoal (turns out, they don’t really pump stomachs for suspected overdoses anymore). When Rome vows he didn’t take anything, the nurse asks Gina for the OK to give him the charcoal. A distraught Gina tells the medical staff to do whatever it needs to make him better.

So Rome is ordered to drink the charcoal, a move the show somehow plays for comedic effect. And while Gary and Eddie are chiding their pal into downing the foul substance, Maggie is confessing to Regina in the waiting room: She knew about the suicide attempt, and she’s the one who referred him to Dr. Heller. Regina is less than happy about the revelation, but puts off her anger. “I need to use all of my energy to make sure that my husband is OK,” she tells Maggie.

Gary is convinced that Rome’s pain stems from a kidney stone, and he believes his friend when he says that he only drank the charcoal for Gina’s sake. “I don’t want to die,” he asserts, and Gina hears him as she walks in the door. 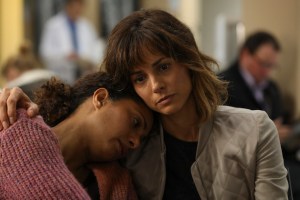 USING THEIR NOODLES | Over a lunch of ramen, Gary and Maggie process that they both knew Rome’s secret but didn’t tell each other. Then Gina calls and delivers the news that Gary’s diagnosis was correct, and while she’s on the phone with her friends, Rome loudly passes his kidney stone.

Rome is discharged, but Gina isn’t feeling much better. “I need to figure out who we are,” she tells him, which sounds a wee bit dramatic, but the woman has had a bit of a 36-hour period, no?

Then it’s time for another dare. She points to the woman yelling order numbers over a public-address system. “I dare you to steal her microphone and sing ‘I’m Still Standin’,’ your version, wrong lyrics and all,” Maggie challenges her man. So he does… and Maggie sings back-up. (Side note: If James Roday and Allison Miller were actually singing, which it sounds like they were, well done!) Their fellow ramen-slurpers clap along and chime in on the “yeah, yeah, yeah”s.

TRUTH OR DESPAIR| The dare thing turns a little too real when Gary notices a lingering bruise on Maggie’s arm, physical evidence of her advancing illness. So she dares him to show the world he’s not afraid of anything.

So he graffitis “Maggie was here!” on the side of a building 15 stories up. She’s tickled. “That is exactly what I want the time I have left to feel like. I was here, damnit, until I wasn’t,” she says. Then she instructs him to dare her, and make it something really hard. “I dare you to get chemo,” he says, which upsets her greatly. “Game’s over,” she says, walking away. “I’m done playing.”

He stops her, but she’s still real angry. “Dr. Stacy was right. You’re so scared,” he says. “Of course, I am,” she admits. “I thought you, of all people, would understand that.” And then I think they break up (again)?

While Gary chaperone’s Danny’s first date with the boy he likes, Rome and Gina go out for a “let’s try to start over” evening, and Maggie sees her bruises in the mirror at home and freaks out. Then she flashes back to moments with the friends she loves, and she maybe comes to a decision?

A DREAM DEFERRED | Eddie is jazzed that his set at the club went so well. But his excitement is tamped down rather significantly when he realizes that the interest an agent is showing is mainly because that agent’s young male vocalist — the dude we met briefly backstage in the previous episode — wants to record Ed’s song.

After both he and Delilah arrive at the hospital to support their friends, Eddie winds up accompanying his baby mama to her ultrasound. They both get teary over hearing the heartbeat, but they still agree that no one can know that the kiddo isn’t Jon’s.

“Whatever we did, whatever happened, we also created a life,” Eddie tells Delilah afterward, promising to do whatever’s necessary to support her. Then he goes to the club where young singer dude is drinking with friends, and agrees to sell him his song — even though young singer dude is going to mess with it. As a parting shot, Eddie advises him to stop drinking so much. Otherwise, he’ll end up like him, “selling a great song to someone like you.”

Meanwhile, one of Katherine’s hot co-workers flirts with her, but she tells her assistant (hi, Sam Pancake!) that she’s got no time for that nonsense. Still, she and Hot Co-Worker go out for a bite at the same ramen place where Gary is nursing his broken heart with a bowl of broth.