Note to A Million Little Things viewers: If you ever want to keep something secret, make sure you don’t tell Rome.

Because the guy is incapable of zipping his lips, as evidenced by his spilling of Delilah’s big secret within the first few minutes of this week’s episode.

But Rome’s got a secret of his own, remember? And yep — that one is out in the open by the end of the hour, too.

Read on for the highlights of “unexpected.”

NOW EDDIE KNOWS | While Rome and Gina prepare for game night at their house, he admonishes her for failing to ask Delilah who her baby’s father is, adding, “Montel Williams made an entire career off of that question. How could you not ask?” (Ha.) Gina makes him promise he won’t say a word, but the man has zero chill. So when everyone shows up, after they celebrate Eddie’s booking an opening gig, Rome can’t help but blurt out that Regina isn’t expecting. “Then whose pee did Gary touch?” Eddie asks, clueless. “Can I talk to you for a second?” Delilah whispers.

When they’re alone, Eddie is super into the idea of his best friend’s widow having his baby born of adultery. “Maybe everything happens for a reason,” he starts, but she shuts him down: “It’s Jon’s baby.” The party falls apart, and on the way home, Eddie cries over the realization that Delilah was cheating on him with her husband.

NOW GINA KNOWS | Gina’s mom, Shelly, shows up for a surprise visit. This does not make Regina happy. Shelly is pushy and passive-aggressive, offering her unsolicited opinion on everything from the lighting in Regina’s restaurant to the state of her daughter’s marriage. And when Shelly gets wind that maybe Rome isn’t as against having children as he previously was — those few minutes when he thought Regina was knocked up apparently changed his mind a little — Regina’s mom just can’t stop herself from meddling. Her passive-aggressive hint-dropping so infuriates Regina that she eventually blows up, and Shelly leaves.

Regina and Rome are about to leave for Eddie’s gig when she walks into the living room, crying and holding Rome’s suicide note in her hands. Confused and angry, she yells at him and cries, then he’s crying, and it’s a rough scene. “Sometimes, for some reason, I feel so sad,” he confesses. She makes him look her in the eye so she knows he’s listening when she says, “You are not the best part of my life. You are my life. And I will not lose you.” He sobs. They hug. 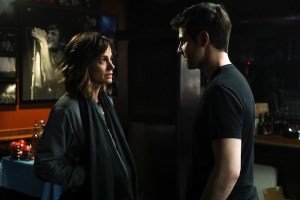 BACK IN THE SADDLE | Maggie and Gary volunteer to watch Theo (Katherine’s out of town on a work trip) during Eddie’s concert. And Gary supports his bud by going to the soundcheck earlier that day, as well — though he leaves soon after on a “secret errand.” But Eddie’s still feeling shaky shortly before he’s supposed to take the stage. As it happens, Eddie’s freak-out about never having performed sober coincides with Theo’s bout of night terrors. And since the kid is up anyway, Maggie and Gary decide to bring him to watch his dad’s show.

Seeing his kid steadies Eddie, who plays a sweet acoustic song called “unexpected.” And oh, look: Delilah is in the crowd, too!

NOW EDDIE REALLY KNOWS | Let’s back up a minute. That “secret errand” Gary went on? He was accompanying Delilah to her gynecologist’s office for an abortion. She got as far as lying on the table and being hooked up to IVs and such, but she eventually changed her mind — a development she reveals while they’re in the car on the way home.

So after Eddie’s concert — which went very well, thank you — Delilah meets him back stage. He reassures her that he’ll be there for her no matter what, even though he didn’t bake the bun in her oven. “There’s nothing you can say to me that will change the fact that I love you,” he vows. Then she confesses that she and Jon actually weren’t sleeping together: “This is your baby.”

It’s not a happy moment: They both realize that they’ve already hurt so many people with their affair, and the knowledge that it’s Eddie’s kid will just make everything worse. “I know,” Eddie says. As far as their friends and families are concerned, “The baby has to be Jon’s.” 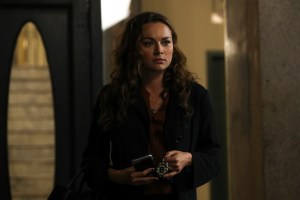 WHAT DOES ASHLEY KNOW? | Also important to note: Jon was in greater financial trouble than anyone realized. While Ashley is at Delilah’s, Delilah is on the phone with the bank: There’s some kind of hold-up with the restaurant, but they’re looking into it. Ashley doesn’t know who Barbara Morgan — aka the mystery woman named on Jon’s life insurance policy — is, and as she slyly feels out, Delilah doesn’t, either.

When Delilah pukes in front of Ashley, there’s no use in hiding: Jon’s widow tells his assistant that she’s pregnant. This seems to light a fire under Ashley, who considers telling Delilah about the blue envelope Jon left for her — then thinks better of it — and then spends the rest of the hour investigating her boss’ not-so-financially-solvent side. This includes finding a mailbox chock full of overdue and unpaid bills.