So you thought things get any more awkward/sordid between A Million Little Things‘ Eddie and Delilah? Allow one peed-upon pregnancy test to change the game.

Yep: As we learn at the end of Wednesday’s episode, Delilah is with child. 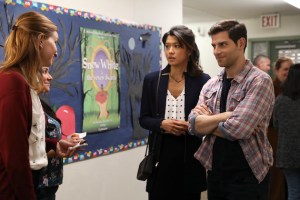 Is it Eddie’s? Is it Jon’s? We have no idea — nor any idea of whether she knows. Meanwhile, despite pulling off a small miracle in order for working mom Katherine to be able to watch Theo in his school play, Eddie is given his official marching orders from his marriage and winds up couch-surfing at Gary’s.

Speaking of Gary: Maggie now knows that he knows her cancer is back, and even though he plans a romantic day full of hot-air ballooning and deep-dish pizza-eating, she refuses to agree to more chemotherapy in order to treat her illness. The fact that Gary pledges to be by her side through the worst of it does little to sway her; in fact, hooking up with him and meeting his friends “made me realize that I would rather keep the life I have right now than waste it fighting for a future” she probably won’t get, she reasons.

But Gary can’t accept that, so he challenges her to a game of basketball. If he wins, she’ll agree to undergo chemo. If she wins, he’ll be OK with her decision to forego treatment. That whole “not knowing much about each other” thing rears its ironic head again when it quickly becomes apparent that Maggie’s got game. And that makes sense, given that she reveals she was a D-1 basketball player at Brown. (Thank goodness one of the show’s writers thought to have Gary point out the incongruity of a very short woman being a college b-ball phenom.) 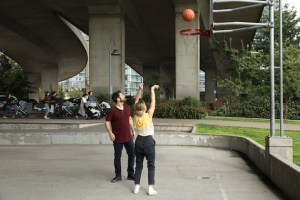 Maggie wins with a three-pointer from the top of the key, and Gary tries to abide by the rules they agreed upon, but he just can’t. So she tearfully thanks him for a wonderful day and leaves. The next morning, however, she wakes up to a can of grape soda (her favorite) and a balloon outside her door. The attached Post-It note reads, “I’m in,” which makes her smile.

Elsewhere in the hour, Rome attends his first real (thank Freud!) therapy appointment and takes his first dose of antidepressants. And though he freaks a bit when he thinks that Regina is preggo, he gets over it… but then is relieved when she informs him that the test belongs to their widowed friend.

OK, your turn. What did you think of the episode and the pregnancy reveal? Hit the comments and let us know!