It’s been a while since A Million Little Things aired, so allow us to jog your memory in advance of Wednesday’s new episode (ABC, 10/9c): As the previous episode ended, Allison Miller‘s Maggie had told sometime-boyfriend Gary once and for all that she did not want to undergo chemotherapy for her recurrent breast cancer. But later, when she caught a glimpse of some bruises on her body, it looked like Maggie had come to some sort of a decision.

“In that moment, she definitely has made a decision,” Miller tells TVLine. “But I don’t know if it’s a different decision, or if she is doubling down on the one she already made.” She adds that the character’s fear finally may be catching up to her. “The way that episode ended, it made it a lot more real for her,” the actress says. “Because there’s physical, visual evidence.”

In Wednesday’s hour, titled “Fight or Flight,” Maggie will have nightmares about what the official synopsis calls “a life-altering trauma from her past.” Meanwhile, the gang will learn that Maggie’s cancer has returned. We quizzed Miller on what both of these developments will mean for her intensely private character.

TVLINE | Maggie has alluded to how tough her cancer fight was the first time around. Have you talked to the producers about what that time looked like for her? Have you come up with any of that backstory on your own?
Yeah. I’ve actually spoken to…gosh, I don’t even know, maybe seven breast cancer survivors, who went through chemo, radiation treatments and mastectomies. So my version of how it felt and what it was is an amalgamation of what they told me about, because there are a lot of commonalities but there’s some stuff that was really specific that I thought, “Oh, this would be just devastating”… And I talked to DJ [Nash], our showrunner, about it, as well. But that wasn’t something that we got really in-depth with.

TVLINE | How will Maggie’s nightmares work their way into the story?
It’s…it will come out in a very inopportune way, as our show loves to do. I can say that it’s something that informs her, [from] the first speech that she gave, in the first episode, after Jon’s funeral, about JFK Jr. and losing sight of the horizon.That comes from a very personal place for her, and that’s something that you’ll start to understand in this episode that’s coming up. 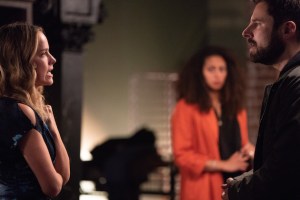 TVLINE | This friend group isn’t one that has shown itself able to keep secrets for very long. I can’t imagine that will change when they learn about Maggie’s illness.
Once one person knows something in this group, everybody seems to know — as, I guess, really happens in real life, when you have a close-knit group like that. Maggie’s surprised by how everyone reacts to it, and it’s all varied. But I think the way that maybe her friends and family in her previous life would handle it is totally opposed to how [these friends] handle it, and it makes for some really beautiful moments with everyone.

TVLINE | In the office, my co-workers and I joked that if a guy brought us to someone’s funeral for a first date, then took off to go to a hockey game —
I would be like, “What the hell?” [Laughs]

TVLINE | Yes! Like, “Maybe not a keeper.” And then Maggie gelled so well with the ladies. Did any of that seem weird to you when you read the pilot script the first time?
Yeah. I definitely was questioning why everyone accepted Maggie so quickly and why Maggie was so gung-ho to just spend all of her time with a bunch of strangers, but I at least could understand it from her perspective. And then all that I needed was to go, “All right. Maggie’s going through something, and she needs a distraction,” and boy, the drama of other people certainly is a great distraction from the issues in your own life. And there is a real, instant connection with those women. That can just keep you there. And she’s an observer of people, and I think that it was right in line with how she operates: just going along for the ride and watching what unfolds, and being a part of it and being present, but with the others. I know don’t why. Everyone keeps saying, “I love this woman. I love this woman,” and I was like, “God. I really have to make her likable, because I’m going to really blow it if she’s not that cool.” [Laughs]