Monday’s episode of The Voice gave us  a lot of extra power by allowing viewers to pick the songs that the contestants would be performing. And on one hand, that twist — set in motion for the third season in a row — seemed to hold a good deal of promise. Would we/Could we possibly point singers toward more disastrous numbers than, say, um, Adam Levine? Doubtful.

On the other hand, Season 15 had already proven to be crazy unpredictable. You know I wasn’t big on Tyke James, but even I was flummoxed by the fact that his Bryan Adams cover was the third-best-selling single of the Top 13… and he still didn’t get enough votes to send Lynnea Moorer home. And trust me, you don’t wanna get me started on SandyRedd’s ouster! So, how were the song selections and the performances that they ushered onto the stage? Read on… 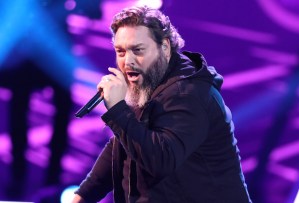 Dave Fenley (Team Blake), “Use Me” — Grade: D+ | In rehearsal, Dave acknowledged that his fans had picked him a song that was a biiig step to the left of his ordinary genre. But it sounded like his dirt-road voice would adapt nicely to Bill Withers — and throwing in some beatboxing seemed like a fun, attention-getting idea. On stage, however, the gimmick was really the highlight of Dave’s lackluster performance. Poor guy appeared to have as much funk in him as I do. (In other words, none.) And even his usually-reliable vocals let him down a time or two. “I’m in shock a little bit,” said Adam afterward. Me, too, and not in a good way.

Chevel Shepherd (Team Kelly), “Space Cowboy” — Grade: C+ | “I like this song,” the 16-year-old told her coach, who was sure that the youngster could sing Kacey Musgraves like her heart had been broken in ways that it hadn’t yet. And Kelly was right — kinda. On stage, Chevel managed to fill her voice with an ache and a plaintiveness that belied her years. However, she sounded at times uncertain of the melody and, on some of the chorus’ bigger notes, went a bit flat. When she was done, Kelly was ecstatic; me, not so much. It was OK — that is, after all, what a “C” denotes — but hardly mind-blowing. Chevel can do and has done better.

Reagan Strange (Team Adam), “Complicated” — Grade: D | Adam said during rehearsal that he thought Avril Lavigne’s hit was perfect for Reagan — and deceptively tricky to perform. Reagan was pleased with the choice, too. She figured it would let her cut loose and have some fun on stage. Me, I wasn’t sure she’d be able to pull off the song’s ‘tude. Turned out, that was not going to be Reagan’s biggest problem by a long shot. She started her performance pancake flat and only occasionally recovered. But throughout, she did look like she was having a blast, which made me think she could only hear herself over the band as well as we could during the noisy choruses. (Turn up her earpiece, somebody!) I love Reagan — she’s as cute as a basket of puppies — but this was neither the perfect song for her nor anything close to a perfect rendition of it. Nonetheless, Blake Shelton insisted afterward that “you sing perfectly.” Um, OK. 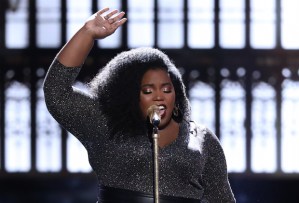 Kymberli Joye (Team Kelly), “Break Every Chain” — Grade: A | At least according to TVLine’s poll last week, Kymberli was exceedingly lucky not to have been in the Bottom Three. But this week, it didn’t sound like she was going to need luck — or divine intervention, for that matter. Kymberli has a voice that was made, made for shaking up the back pews in church, so she dug into the gospel number that her fans assigned her like it was manna from heaven. As Kelly put it, she was “singing [her] tail off for Jesus.” And the more massive the song got, the higher Kymberli rose to the challenge. Even the blaring guitars couldn’t drown her out. If this doesn’t get her a spot in the Top 10, there’s gonna be hell to pay.

Kirk Jay (Team Blake), “Body Like a Back Road” — Grade: A- | We’re all pretty much in agreement (aren’t we?) that Kirk has a voice that could coax the icing off of a cake. But does he have the personality to really slay a song as mischievous and saucy as Sam Hunt’s? He seemed confident that he did — in rehearsal, he told Blake that he was looking forward to leaving the keyboard mid-number to show off some of his dance moves. In the moment of truth, Kirk sounded as solid as the broad side of a barn, and it was nice to see him smile on stage for a change. But bless his heart, a dancer, he is not. Regardless, his coach was elated and marveled at the way Kirk had created a sound that was a mash-up of George Strait and Rascal Flatts.

Chris Kroeze (Team Blake), “Long Train Runnin'” — Grade: B+ | I like Chris’ gravelly voice a lot, but when I’m watching him perform, I never get stars in my eyes, I get more of a feeling like, “This guy would be a kickass cover-band frontman.” And there’s nothing wrong with that… except that it makes him unlikely to make the Final Four. In rehearsal, Blake suggested that Chris could bring a ’70s rock vibe back to country. On stage, Chris’ voice sounded so raw, it was like a Brillo Pad dropped in a blender — and I mean that in a good way. The man was on! During his guitar solo — and really through to the end of the song — he even looked so at-home that I saw the makings of a rock star. Maybe I underestimated his potential. 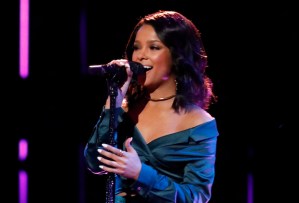 Lynnea Moorer (Team Kelly), “Consequences” — Grade: C+ | Maybe Lynnea’s fans should always pick her songs. If she’d sounded as good in the Blind Auditions as she did on the Camila Cabello hit that she was given to cover, I suspect we’d be having a lot fewer discussions about how unfair it is that she joined the competition late — because she’d have gotten at least a chair turn. Here, she still sounded a bit unsteady to me in her lower register — SandyRedd, she ain’t — and there were dud notes now and again. But the higher and more lilting the melody became, the lovelier Lynnea sounded. Maybe Kelly was onto something when she kept saying how radio-ready the comeback kid was — because with a little bit of studio magic, she would sound radio-ready.

MaKenzie Thomas (Team Jennifer), “Emotion” — Grade: B+ | Considering how well MaKenzie’s “How Deep Is Your Love” went over, her fans did her a real solid by assigning the wannabe acoustic-gospel star a second Bee Gees cover. No, this isn’t the most challenging ballad in the history of music, but that actually worked to her advantage. Since MaKenzie tends to struggle to maintain her pitch when she goes big vocally — and here, she didn’t really have any massive notes to go for — she was free to pack her performance with extra [insert song title here], especially during her ad libs. And since JHud pointed out afterwards that this had been the Destiny’s Child arrangement of the song, I couldn’t even have a quibble with MaKenzie taking a few too many liberties with the brothers Gibb’s melody.

Sarah Grace (Team Kelly), “Dog Days Are Over” — Grade: C | Since Sarah barely avoided the Bottom Three last week — and finished next to last in TVLine’s Top 13 poll — I was plenty worried about Ms. Stank Face Monday. Doing a more contemporary song like Florence + the Machine’s seemed like a good idea, like maybe it would help her appeal to a younger audience. Aand… Sarah seemed to have trouble out of the gate with her lower register — a bad omen. Then she seemed to have difficulty keeping up with the wordiness of the song. She reminded me why I was such a big fan of hers during a quiet interlude when she regained control, but the best I could really say about the performance was that it had some good moments. If there was a silver lining to this disappointment, it was that she was sure to sound better singing for the Instant Save Tuesday — with a song of her own choosing.

DeAndre Nico (Team Adam), “Cry for You” — Grade: C+ | Adam advised DeAndre to make every moment exciting and empty his whole bag of tricks during his performance of Jodeci’s slow jam. And DeAndre certainly did leave it all on stage. But Adam’s advice might not actually have been all that good. (Shocking, right?) DeAndre went so big so much of the time that the result was sort of an intense, yelly mess. Was there passion there? Clearly. A demonstration of vocal ability? Sure, that, too — DeAndre has pipes for days (and he had to have gone home with a sore throat after such exertions). Trouble was, the end result of his efforts — while impressive in their extremes — wasn’t a terribly pleasant listen.

Kennedy Holmes (Team Jennifer), “Greatest Love of All” — Grade: A+ | I was going to complain of sugar shock, since Kennedy was going from “Wind Beneath My Wings” to “Greatest Love of All,” but from note No. 1, the eighth-grader shut my ass right up. After a stunningly bare, “I Will Always Love You”-esque opening, Kennedy turned in an absolutely massive, star-is-born performance, complete with Whitney-like gestures (courtesy of shrewd coach JHud). Honestly, the teen’s poise, charisma and extraordinary vocal control have me convinced she’s going to be Season 15’s winner. This. Was. Stunning.

So, did any of the song selections make you go, “Huh?” Did any of the performances make you wanna throw a shoe? Vote in the poll below, then hit the comments.